I don’t think I will ever warm up to the “Found Footage” genre. Something about the shaky cam and that whole approach to thehorror genre has long grown old. Given that The Vatican Tapes doesn’t specifically fall in that category, it’d be easy to mistake it for another run-of-the-mill assembly line exorcism film. Apparently, it was reworked after the studio picked it up. They should have done much more work on it as the final product is lackluster. Even taking into account that I’m writing this review so close to Halloween, one should still look elsewhere for a satisfying exorcism flick.

Angela (Olivia Taylor Dudley) is experiencing unusual symptoms and disturbing behavior. This is when Father Lozano (Michael Pena) suggests an exorcism. What follows won’t be spoiled by me, but even if I did, it wouldn’t surprise many folks. Truth be told, once you’ve seen one exorcism film, you’ve seen them all. Of course, the classic The Exorcist stands tall above the rest, but we’ve been flooded with these sorts of films for longer than I can recall. You get the usual screaming here, the soundtrack turned up to themax, and the typical checklist of items that occur before the final credits. You will also get the obligatory nod towards a sequel as well. Now THAT is a scary thought. Scarier than anything else that happened in the film. There will be some purists that will watch this film out of boredom or simply being in the mood during the Halloween season. There’s just nothing here that hasn’t been done much better, but also nothing here that satisfies in its own right. I was bored throughout this film, impatiently waiting for it to end. There are far better exorcism films out there.

The “found footage” genre is a mixed bag. One one hand, it does give a fairly interesting and realistic look at film-making. On the other hand, I paid a lot for my A/V equipment and I want my movies looking like I’m looking through a window. You just don’t get that with this genre of film. That’s ok though, I’ll live.  There are times when the image looks strong and others – not so much. Still, the 1.78:1 AVC HD image has its moments.  Put it this way, if you’ve seen one of these types of films (and we all have), you’ll know what to expect.

The included DTS HD Master Audio sound mix is a bit stronger than the video quality (despite the same rating given to it), but like so many other types of these films, it’s really hard to get a true sense of the sound design. A majority of the sounds are naturalistic which makes sense since that’s the look they’re going for. Vocals seem reasonably strong and clear, surrounds are used sparingly and the LFE seem to have had the day off. Nevertheless, it’s a mix that serves its purpose and not much else.

Devoid of any redeeming qualities, Tapes is another in a long list of forgettable exorcism movies. Instead of offering genuine scares, we’re treated to gross images and loud jump scares that can be seen coming from far off. The entire cast looks bored out of their minds. That’s exactly as I felt watching it. 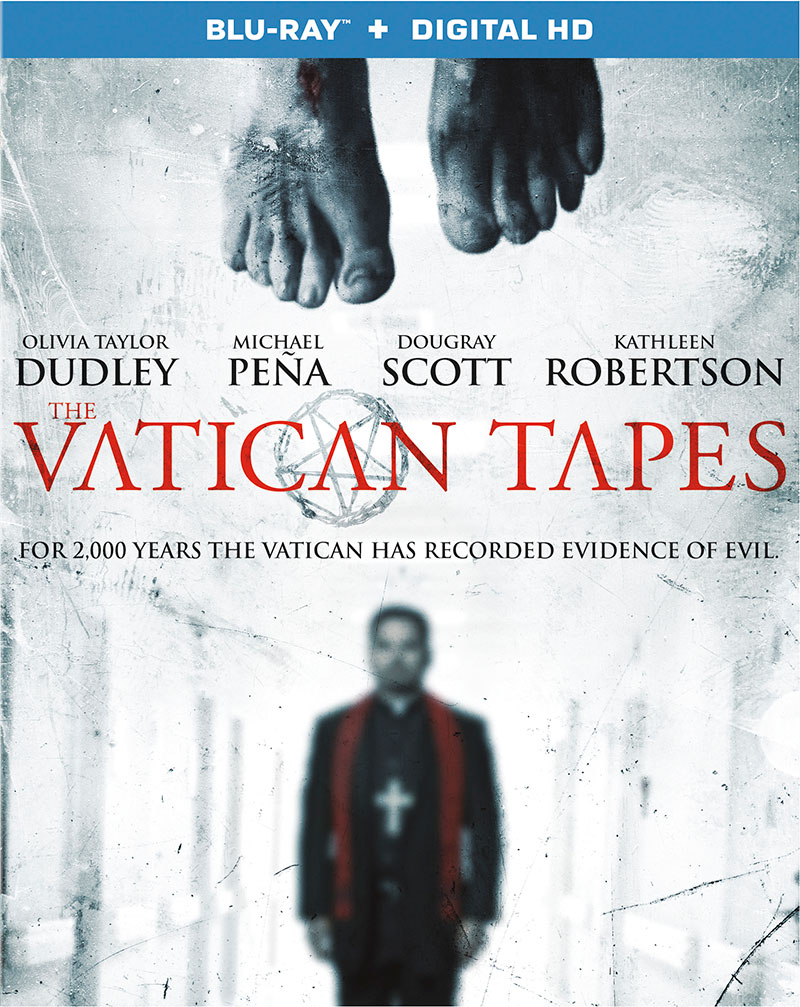