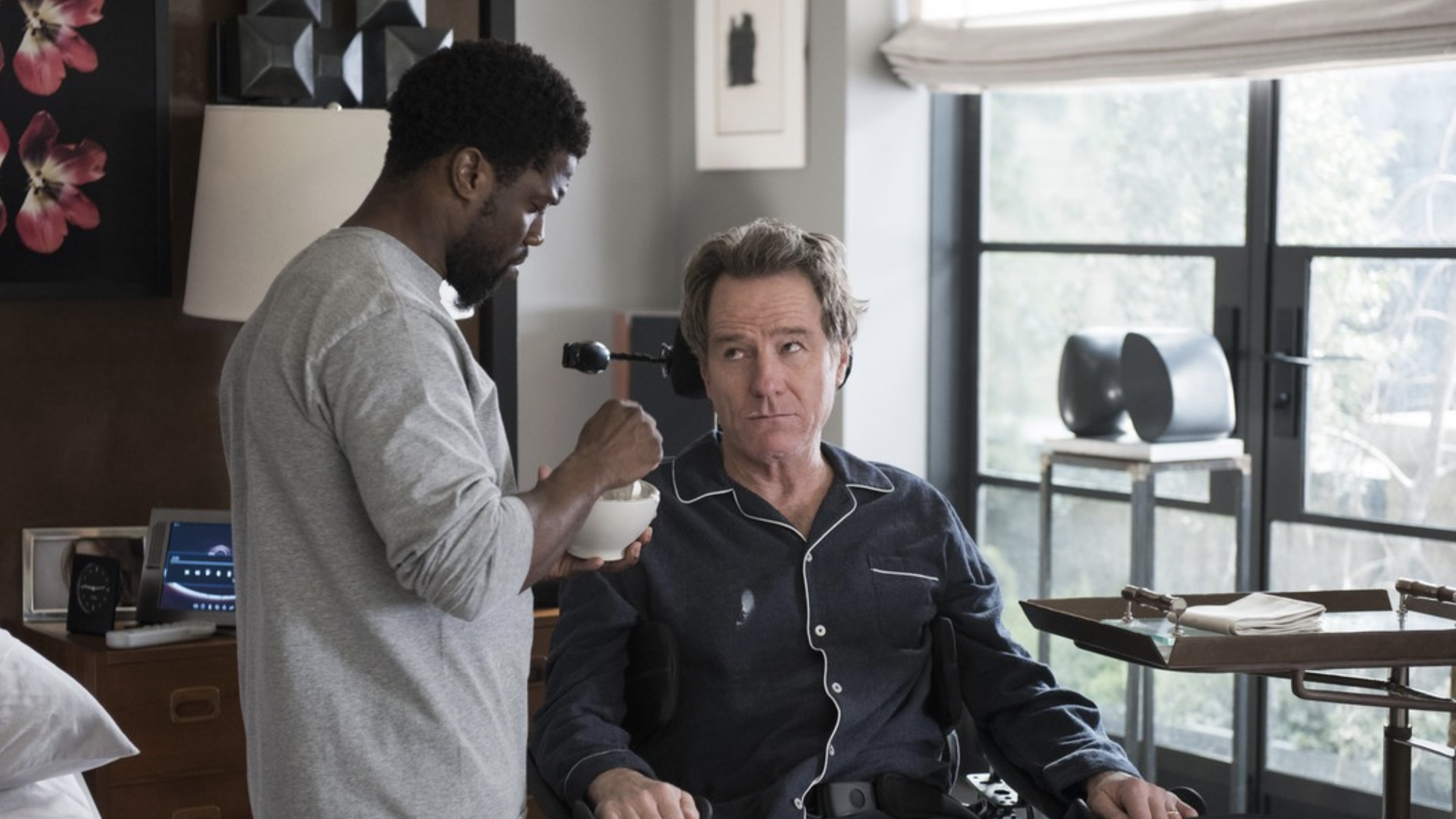 Plot: What’s it all about?

Based on a true story, The Upside is a remake of the French film, Intouchables, a film I haven’t seen, but might seek out now. It does nothing new in terms of plot or character development, but it works because of the strong performances of the two leads. Much like the recent Green Book, it follows an unlikely friendship between two people. The film itself is a far cry from Green Book, but the core story of friendship is the same. I also appreciated how it doesn’t try to do too much with its premise. It really tells a simple story and explores the characters and their past lives before the two of them entered each other’s.

Out of prison on parole, Dell Scott (Kevin Hart) needs signatures to show he is looking for employment. He shows up at the home of Philip LaCasse (Bryan Cranston), a wealthy man who, after an accident, is a quadriplegic. Dell makes a strong point that he is only there for the signature and nothing else, but Philip takes to him. Nicole Kidman plays Philip’s assistant, and while she believes there are several applicants who are a far better fit than the inexperienced, Dell, Philip hires him anyway. The job would be essentially a round-the-clock caregiver for Philip who would live at his penthouse. Dell declines initially, but accepts the job before long. It’s here that the film’s plot is set in motion and before long, the two men bond.

One can look at a plot like this and more or less see where things will head, or at least some plot points that are touched on. Cranston and Hart are a large part of why the film works. I like that Hart seems more restrained here than usual. It shows what a great actor he can be. Obviously, Cranston has the more challenging role since he’s confined to a wheelchair for the film, but he makes it work too. I mentioned that the film doesn’t try to be more than what it is and I think that’s what works. There aren’t random subplots or wild curveballs thrown our way. It really is a simple story of a man down on his luck who needs a job and ends up changing the other man’s life as well. LaCasse changes Dell’s life as well as he swears to give us his prior ways and not be a thief anymore. I enjoyed that it’s a crowd pleasing film you can take at face value. I will say that it does run too long. At a little over 2 hours, it overstays its welcome. It’s never boring, mind you, but it drags more than it should and a few scenes could’ve been tightened without hurting the narrative. This caveat aside, the film earns my recommendation. It isn’t something I need to watch over and over, but it’s worth a single viewing.

The image is more than adequate, but that doesn’t surprise me as Universal is pretty consistent these days. Shot digitally, we should expect greatness and it comes. There’s a clean look to the film and really I can’t think of any obvious flaws that stood out. The image is AVC encoded with a 1.85:1 ratio.

The DTS HD track also works well. This is a film heavy on dialogue, but there are moments that liven it up. The film begins with our two lead characters speeding in a car with police in pursuit. This gives shows good range. The vocals have a clarity that’s to be expected, making this a worthy track to accompany the film.

I’ll admit that I avoided The Upside in theaters, because it looked all too familiar. Thankfully the humor is toned down a bit and it plays more seriously, though there are lighter moments which help. It’s a worthy rental. The disc is presented with strong specs, but the features are borderline pathetic. I would’ve loved a lengthy documentary or behind the scenes look on the story on which the film is based, but that wasn’t meant to be. Rent it.