There seem to be several recurring themes in Hollywood in which a certain movie is made. Then made again. And again. You get the idea. We’ve had so many returns to the OK Corral that I’ve lost count. And classic novels aren’t immune to Hollywood’s touch, either. How many versions of Frankenstein do we need? Or Hamlet? Yet another that still sees the light of day is Alexander Dumas’ classic The Three Musketeers. I believe that the last version of this classic tale was made in the early to mid 90’s starring Charlie Sheen, Oliver Platt, Kiefer Sutherland and Chris O’Donnell. I actually enjoyed that and when I heard they were re-making it – again – I wasn’t really sure what to think. Ok, granted, Paul W.S. Anderson is behind the camera and I’m a big fan of the Resident Evil franchise, so it’s got to be worth seeing, right?

Anyone who was forced to read the novel in high school will be familiar with the general plot. We’ve got our three heroes: Athos (Matthew McFadyen), Porthos (Ray Stevenson) and Aramis (Luke Evans) as well as the aptly-named Milady (Milla Jovovich, a staple of the director’s films). The quartet head to Venice to see if they can get their hands on some plans for an airship drawn up by Leonardo Da Vinci no less. The mission is a success, but no sooner do they celebrate than they’re double-crossed by Milady. The musketeers are then disbanded though eager young D’Artagnan (Logan Lerman) seems hell bent on being a member of the group come hell or high water. And after a series of very fortunate events, D’Artagnan ends up mixed up with Milady and wouldn’t you know it – they meet up with the trio. Of course there’s an impending war with England that only the Muskteers can help prevent and it’s now up to them to try and save the day. My oh my, will they?

I had mixed emotions when putting this disc in and while the movie isn’t a total bust, I don’t envision watching it again for some time. Yes, I do realize that it’s a rather unique twist on an otherwise classic tale, but I just really didn’t buy the performances in this version. The supporting cast is certainly littered with big names like Orlando Bloom, Christoph Waltz and Milla Jovovich but despite all the star power, I still think the movie fell a bit flat. Audiences seemed to agree as well as the movie only grossed a paltry $20 million at the domestic box office. Maybe this is the eye-opener that Hollywood needs that they can’t just keep churning out the same thing over and over again and expecting positive results. Then again maybe not. With the myriad of choices out there in regard to an “action” movie, I think most folks will pass this one by but the technical aspects of the film are worth mentioning. Speaking of which…

Putting aside the plot and just looking at the film on a visual level, it’s pretty darn amazing. Paul W.S. Anderson certainly has a cinematic eye and knows how to stage the scenes so that they play to the audience. The 2.40:1 AVC HD image is nothing short of perfection on the 2D version and with the 3D version, it’s a bit on the darker side. Colors are strong and bright and detail is as we might expect it to be – amazing. I saw no evidence of banding or artifacting at all. This is a new to Blu-ray film and, as such, it excels in the video presentation. As previously mentioned, the 3D version does appear to be a bit darker than the 2D and it seems that some opportunities were “missed” so to speak in regard to using the 3D. I think filmmakers don’t need to put everything in 3D just because it’s en vogue. Rather if it’s used wisely, as in Hugo, it’s much more effective. Still, it’s about as close to perfection as you can get, visually.

As if the impressive visuals weren’t enough, the DTS HD Master Audio soundtrack is also second to none. I’m hard-pressed to find a more active, robust soundtrack in a live action film. Sonics are vast and expansive filling the room with at least some sort of sound during the entire 110 minutes. The LFE are very involved too, so if you live upstairs from someone – you might want to invite them up to watch the movie else you’ll get a visit from the landlord. Surrounds are almost constantly buzzing and directional effects are used with great effectiveness. Yes, truthfully, my head was craning left and right (and back and forth) to “follow” the sound. Dialogue was rich and crisp so we get all of the pseudo French accents in the utmost lossless clarity. Turn it up, this one’s worth it.

This 3D Blu-ray set has all the features found on the 2D set with the 3D movie getting its own disc (though no exclusive features). We start off with a commentary track by director Paul W.S. Anderson and producers Jeremy Bolt and Robert Kulzer. The trio talk of the physical aspects of the movie, the effects and coming up with an original story for a movie that’s been made so very often. It’s a good, albeit technical, track. “Access: Three Musketeers” is a picture-in-picture feature that’s actually quite informative. I have to admit that these are growing on me. I do like the way Summit’s discs present this, too as opposed to Warner’s which essentially interrupt the movie on a whim. “Paul W.S. Anderson’s Muskteers” features some cast and crew interviews as they discuss making the film for new audiences. “Orlando Bloom Takes on the Duke” is merely a chat with Bloom about his character in the film. “17th Century Air Travel” is actually quite intriguing as Anderson discusses his decision to shoot with “practical elements” as opposed to relying on CGI for everything in the film. “Uncovering France in Germany” is just that – the movie was shot in Bavaria, not France. Finally we get some deleted and extended scenes. 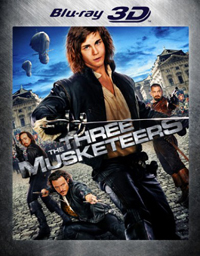