The Thing From Another World (Blu-ray) 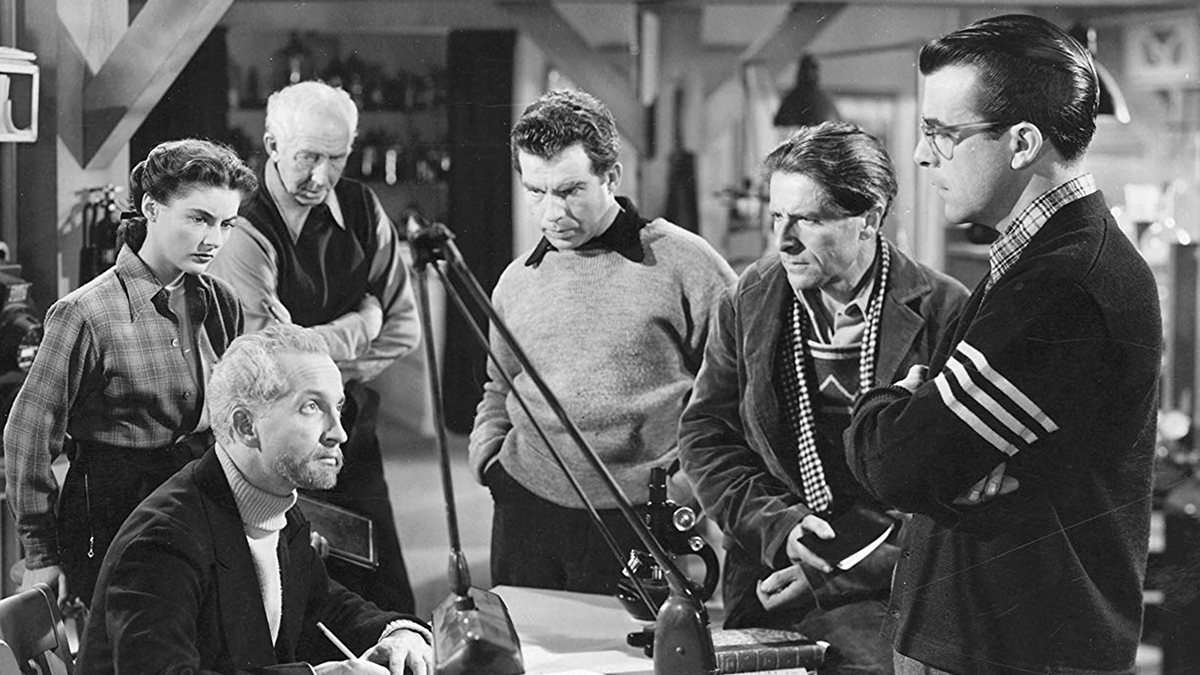 Warner Archive is doing film collectors a great service with their releases. This year they have tackled everything from Hammer Horror to obscure science fiction oddities to film noir. With the release of the Howard Hawks produced, Charles Lederer penned The Thing from Another World, they have released one of the most influential sci-fi horror films from the golden age of science fiction. I was so excited when I saw that they would be releasing this on Blu-ray. When my copy arrived, I forced my whole family to watch it with me after dinner.

As the film begins, men are called from an outpost in Alaska to an outpost in Antarctica. Onboard is a reporter named Ned Scott (Douglas Spencer) and  Captain Patrick Hendry (Kenneth Tobey.) They are alerted of a large unidentified flying object that has been seen near the base. Those that viewed the U.F.O. claimed that it traveled similarly to a meteor but was proven to not be when it moved horizontally. The researchers find the object buried in the ice, having melted a large portion of the ice on impact. When they try to blow it out of the ice with an explosive, the UFO explodes. All that remains is a crater. When they look under the ice they see what appears to be a man. They cut out the ice surrounding the man and bring the man encased in ice back to the compound’s store room. They break the window to keep the ice from melting and decide to take four hour shifts. The station has radio interference that keeps it from receiving orders regarding what to do. Dr. Carrington (Robert Cornthwaite) would like to melt the ice and examine the encased alien, but Captain Hendry wants to await orders. He assigns the men to four hour watches and then shortens them to two hour watches. While on watch, an officer accidentally leaves an electric blanket on the ice. The alien thaws out and escapes. Attacked by some dogs outside, it leaves behind an arm and numerous dead dogs.

This film is widely considered one of the defining science fiction films. Director John Carpenter took this film and created a masterpiece with his Kurt Russell led 1982 reboot. That film is one of my favorite movies of all time. I had never seen the original film and was pleased to see that there were numerous similarities and differences between the two films. The key difference between the two films is that the alien in this film does not take the form of crew members but instead stays in one form throughout the film. This is a pretty substantial difference, making the remake a much more paranoid affair than the original. The original also has a minor love story and a much smaller body count. Luckily, the rest of the plot follows similar guidelines.

One of the best parts of both films is the remote Antarctic setting. This setting is great because it confines the characters to a surrounding that is deadly outside the confines of the small outpost. This helps achieve a claustrophobic effect that works to the film’s advantage. This film benefits from the writing chops of Charles Lederer who is by all accounts one of the great screenwriters of that time. Lederer had already penned the classic Kiss of Death and His Girl Friday. Working off of a short novel by John W. Campbell Jr., Lederer managed to keep the film from becoming as ham-fisted as the normal science fiction of that time. His attention to dialogue is still intact, despite a fairly hilarious scene discussing the physiological makeup of the Thing. The strong writing helps this film stand out from the pack. The film also benefits from direction by Christian Nyby who was responsible for editing films like To Have and Have Not and The Big Sleep for Howard Hawks prior to directing this film. After this film he had a long and successful career directing television.

One other memorable aspect of the film is that there is a fire related stunt involving some kerosene that is still incredibly impressive today. I honestly don’t know if this stunt was really well planned out or if the filmmakers were just bonkers. Regardless, The Thing From Another World is another solid release from Warner Archive Collection. It is easily one of the best science fiction films from the Fifties if not the best. I am so glad to finally have it in my collection.

Warner have done an excellent job on the restoration of the film with a new 2K scan from the original elements in 1.37:1 aspect ratio. This means that on most televisions there will be a couple black lines on the edges of the picture. Black and white films when done correctly look gorgeous on Blu-ray. That is definitely the case here. Warner have already proven their capabilities with Black and White on releases like Gun Crazy and Out of the Past. Once again, they show just how well they know their craft. The picture here is clear and fine detail is excellent. There is some softness that occasionally creeps into the picture, but these occasions are so rare that it would be ridiculous to complain. Fans of the film will be glad to know that there is not a thing that they could have done much better.

Warner have provided a DTS-HD MA 2.0 track. The dialogue is clear and they have done an excellent job removing any hiss. The bombastic score by Dimitri Tiomkin sounds good on this track. This is not a particularly immersive track, but they have done a solid job on the mixing. Fans will be pleased.

The Thing from Another World is another Warner Archive Collection Release that deserves a place on film enthusiasts’ shelves. It may be the best of the early science fiction films. It still holds up. With great attention to dialogue and a strong sense of setting, the film is much more entertaining and less silly than most of the science fiction films of that era. The lack of supplements for this release is a little disappointing, but for fans of classic sci-fi/horror this release is basically a mandatory purchase.