The classic Bible story, made into one of the biggest, most epic films of all time. Moses (Charlton Heston) and Rameses (Yul Brynner) are brothers, or at least they think so. In truth, Moses was put into a basket and sent up river, to avoid being slaughtered by the Egyptians. He is discovered, and is made into a price of Egypt, just like the blood son of Pharaoh. After he learns of this, he decided to leave his extravagant lifestyle behind, and return to his slave roots, with his people. But his people are indeed slaves, being forced to build the pyramids for Pharaoh, but they keep hope, with their faith in what is to come. They believe a “deliverer” will come to take them away from their slavery, and lead them to freedom. Moses, after a series of events to convince him, is seen as just that guy. He speaks with God directly, and delivers the message to Pharaoh that if the slaves are not set free, plagues and curses will be set Egypt. He ignores and even laughs at Moses, but then it hits the fan as the water turns into blood, toads devour the city, you know, end of the world stuff. Needless to say, you know how it ends, at least I hope you do. So, I won’t go any deeper into the story. It’s a classic, and a must-see movie.

Now, let’s talk epic. This is an epic, if not the epic film of all time. The largest sets, the biggest cast, and the coolest special effects. Yep, these effects, even though made in 1956, still stand fast in today’s digital effect realm. That’s how you make a movie, make it to last the test of time. No matter what era, no matter what technology has done, this movie will always be great. This is the type of movie that was so well-made, even a full blown, big budget, digital effects festival, re-make would fall light-years short of even equaling the original. It’s seriously like watching history unfold, it is that convincing, with on-location shoots in Egypt and Sinai, where the events depicted in the film really happened. Well, if you believe that sort of thing anyway.

The sets are unbelievable, I can hardly believe they didn’t shoot this on actual ruins and ancient buildings. Nothing pulls the title of epic from under a film than shoddy, unconvincing sets, and this movie does not fall into that category of error. The sets are actually on location for the most part, and never have that cardboard cut-out feel. I’m sorry, but the ship sinking scene in Titanic was awful, and I don’t know whether is was a location shot, but if it was, they screwed it up royally, and made the movie look cheap as hell. The Ten Commandments has no such problems, and it is one of the main factors in what makes it such a great damn movie to watch.

Another contribution to the movie’s lasting appeal is the very well-done special effects sequences. It’s very rare, if not impossible, to find a film this old that has special effects that still convince audiences, and The Ten Commandments is one of them. While surely not as flashy as the effects in say, The Matrix, the effects are realistic, and get the job done quite well. Not the usual “Man, that used to look so cool, now it sucks” kind of comments with this one. The parting of the Red Sea scene is the most predominate segment that comes to mind, and it is nothing short of breath-taking. Other effect scenes are more along the lines of what digital technology would take care of today, such as hundreds upon hundreds of extras. Today, digital wizards would just replicate a crowd like that one, but not here, every person, down to the last one, is a real guy. Talk about making a scene seem real, how about a couple hundred slaves, doing dozens of different actions, each visibly separate from the next. That makes the world of Egypt, and all its inhabitants, come to life and seem real.

Even with all this going for it, The Ten Commandments would have faltered if not filled with talented actors and actresses to breathe life into its characters. As I mentioned, Charlton Heston plays Moses, and wow, what a job he does. When people think of Moses, this is what they think of. Now, no offense to mentioned actors, but when I think of Malcolm X, I don’t think of Denzel Washington, and when I think of Jesus Christ, I don’t envision Ted Neely (Jesus Christ Superstar), but with Moses, this film’s portrayal of him defines the image most of us have of him. How’s that for being convincing? Also shining is Yul Brynner as Rameses. I mean, this guy is instant good acting, I say. He is one of the meanest looking dudes on the Earth, perfect to play the heart-less, greedy Pharaoh. These two work very well together also, bringing a sense of a real personal bond to the “brothers.”

Aside from the two main guns, a great ensemble cast plays back-up in this one. The first guy I always think of is Vincent Price, who is damn eerie, even in a Bible story. He seems like the devil himself, and plays a suited role, as a self-serving planner/architect. Also forming the stellar cast are Edward G. Robinson, Anne Baxter, Judith Anderson, John Carradine, a literal army of extras, as well as other smaller roles filled by recognizable stars. The sheer scope of this film calls for all the extras, and they are well-used, each put to good use, doing various slave stuff and whipping people, so on and so forth.

Well, let’s sum this up by saying it as simply as I can. If you have not seen this movie, this is the only way to truly see it. Don’t wait until Easter and see that grainy, commercial laced full frame television horror. For God’s sake, see it as it was meant to be seen, in wide-screen and with re-mastered color and audio. This is an unbelievably great version of this film, and a must have, whether you’re a die-hard movie nut, or even a casual movie-goer. It’s one to show your kids, and this is the best, and therefore, only version out there that does the film it’s justice. And the Lord said, buyeth this Blu-ray, or suffer a gaping hole in your Blu-ray Heaven… ::cue thunder effects::

I remember seeing the standard DVD several years back and being awestruck by how darn good it looked. Paramount takes care of some of their titles and certainly there aren’t too many of this caliber in their library. The box claims that the film was meticulously restored and after seeing the Blu-ray – they were right. Now I will say that this movie is 65 years old, so it’s not quite as pristine as some of the titles we have today. That said, the 1.78:1 AVC HD image looks positively grand. Colors are strong, we get to see the “special effects” in all their glory. Yes, there are some blemishes but black levels are deep. The image seems to be very smooth and have more of a film like quality to it. While not the best restoration out there, this does look pretty darn good. As it should.

There was a quote in the audio section of the standard DVD review that said “When God speaks, it’d better be in 5.1 sound.” Well that rings even more true now that the soundtrack is a full DTS HD Master Audio mix. Yes, we get some rather dated special effects and the sound isn’t quite as natural as we’re used to with “modern” movies. Dialogue, especially the voice of God, sounds very robust. Ambient effects come into play such as some background crowd noise, wind and thunder. The mix is very active and even when there’s nothing going on, it seems that there’s a semblance that there’s something getting ready to happen, audio-wise.

Simply put, they don’t make ’em like this anymore. This was back in the day when studios were trying to “Wow” audiences with the magic of movies. We, as moviegoers, aren’t that impressed by things like this nowadays. If the Blu-ray from 2011 is still in your collection, there’s really no need to upgrade. This is simply a re-packaging of what’s already been released. Admittedly, you can’t go wrong with this one. 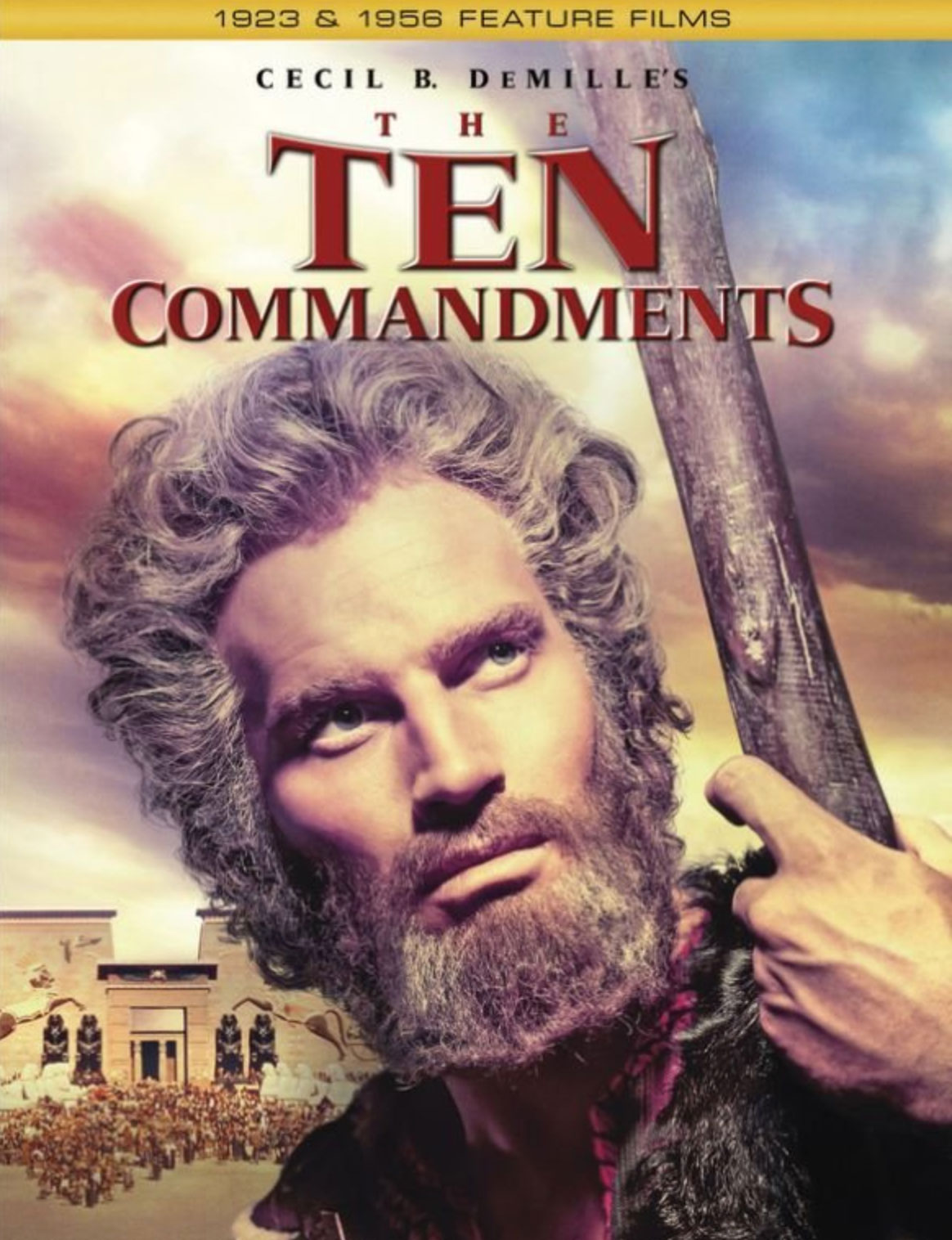