The Satanic Rites of Dracula (Blu-ray) 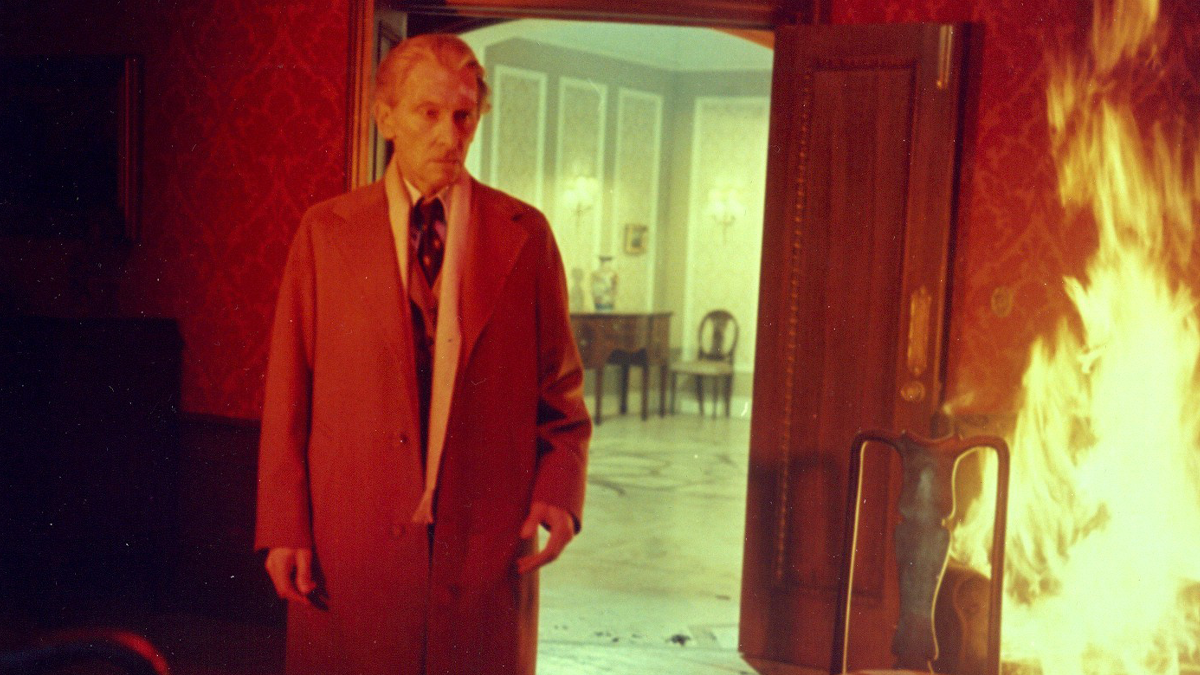 I recently reviewed Warner Archive’s release of Dracula A.D. 1972. I gave it a middle of the road review because it is not a great movie but has some redeeming qualities. While it was not great, I was still entertained and enjoyed watching the film. Sometimes the hardest part of writing a review is being fairly objective. While I enjoyed the film, I probably enjoyed the film for the exact reasons a random viewer would despise it. It is hard to recommend a film that you are not convinced will please other viewers. Hammer Film enthusiasts tend to consider that film one of the lesser entries in their oeuvre. I was excited to see that I would have the chance to watch another Christopher Lee and Peter Cushing film from the same era, directed by the same director, The Satanic Rites of Dracula. I was curious to see how it stacked up.

In London, while a brutal satanic ritual occurs in a compound, a tied-up man escapes from the room where he has been held. He evades his captors who chase him towards the gate of the compound. At the gate, the motorcycle riding are shot in the head and the escapee hops in a waiting car. The injured escapee is interrogated. “You’re sure it was John Porter?” he is asked. The escapee describes seeing the blood sacrifice of a young girl that he witnessed before he passes away from his injuries. The secretive agency officials, Mr. Torrence (William Franklyn) and Matthews (Richard Vernon) overseeing the operation call in Inspector Murray (Michael Coles) of Scotland Yard, Special Branch to help investigate the VIPs under surveillance. There are five photos from the dead man: a General, Honorable John Porter, one of the largest landowners in London, Professor Julian Keeley- a Nobel Prize winning professor, the fifth photo doesn’t show a man. John Porter is notable for overseeing the day to day operations of the service, so that means they will be operating without agency. Seeing the occult may play into the ritual, Inspector Murray recommends bringing in a colleague named Professor Lorrimer Van Helsing (Peter Cushing.) Van Helsing explains that the cult at Pelham House might be a modern vampiric cult. (Of course, all of this will eventually lead to Count Dracula (Christopher Lee.))

Black Plague, The Sabbath for the Undead on 11/23, moustachioed aviator wearing gun toting assassins, vampirism, Satanic blood cults, reincarnation and more play into the plot. The Satanic Rites of Dracula is in some ways a sequel to Dracula A.D. 1972. While all over the place, the film’s script is more interesting than the prior film. The film doesn’t suffer from trying so hard to be part of a scene. It knows it is square and is fine with it. Instead of trying to be groovy, it just tries to be interesting. It helps the film’s tone. It also takes away some of the unintentional fun of the prior film. This film can easily be viewed with no prior knowledge of the prior film, though both were written by Don Houghton.

The biggest weakness of the film is that the ending falls pretty flat. I enjoyed watching the film but cannot believe how poorly conceived the final showdown for the film turned out to be. It made me laugh.

The reason to watch the film is to see the great Peter Cushing and Christopher Lee reprise their roles. The film is wacky and all over the place and almost good. Unfortunately, the ending really drags this one down. Fans of Dracula A.D. 1972 will probably want to check it out, but there are better Hammer films coming to Blu-ray soon from Warner!

Warner have done an excellent job on the restoration of the film with a new 2K scan from the original elements. This transfer is very impressive if you have ever seen how rough the film has looked outside of the Blu-ray format. Presented in 1.78:1 aspect ratio with an MPEG-4 AVC encode, the film looks pretty good. No matter what this film would always have a fairly soft focus. This is more due to the cinematography by Brian Probyn than of the transfer. Probyn is notable for having worked on the incredible Badlands by Terrence Malick that same year. I wonder what this film could have looked like if he had been given a little freer reign from director Alan Gibson. Fans of the film will definitely want to upgrade. Prior video presentations have been made effectively obsolete.

Warner have provided a DTS-HD MA 2.0 Mono track. Unfortunately, this audio mix is not quite as enjoyable as the video presentation. While the sound does not suffer from an abundance of hiss, at times it is very difficult to hear what people are saying. I ended up putting the subtitles on so that I wouldn’t risk it jumping up and down whenever the music kicked in. Some people may feel like this is nit-picky, but I wish they could have raised the volume on the dialogue or taken down the volume on the score.

Similar to Dracula A.D. 1972, The Satanic Rites of Dracula is not a great movie. It’s a better premise than the prior film, but it also lacks some of the fun of the prior film. This film could have been much better if the ending had been a showstopper. As it stands it feels like a bit of a missed opportunity. Fans of the film are going to be blown away by the new video transfer and will want to upgrade. Overall, I would recommend a rental prior to purchasing. That said, I am so thankful that Warner is releasing more Hammer films, so maybe it is worth buying it to keep these releases coming!