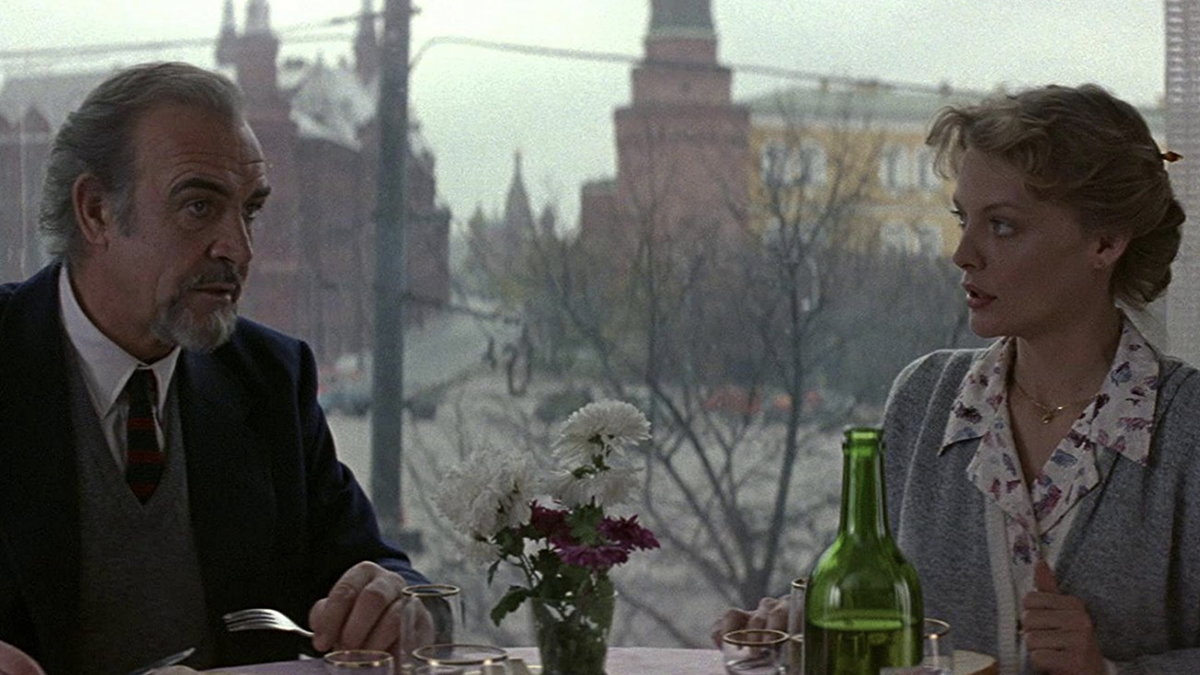 I love spy fiction, whether in books or on film. In my opinion there is no greater writer of espionage fiction than John Le Carrė. Ever since reading a beat up paperback copy of The Spy who Came in from the Cold, I have been a fan of his writing. This is not to say that I have read all of his novels, but I have read at least one every year since that first paperback. When I saw that Twilight Time had released a film adaptation of his novel The Russia House, it was a proposition I couldn’t resist (even though I had not yet read the novel on which it was based.)

The film begins in Lisbon with alcohol indulging book publisher Barley Scott Blair (Sean Connery) being questioned by the British intelligence. This is all regarding a Russian manuscript they intercepted and a Russian woman named Katya (Michelle Pfeiffer.) The manuscript is of great importance due to the nuclear secrets from Russia revealed in it. The manuscript had been dropped off at a book fair in Russia by Katya with the specific instructions for Barley to publish it. Once Barley jogs his memory, he realizes that this must have been sent to him due to a comment he had made in Russia to man who called himself Dante. The British intelligence propose that Barley enter Russia and contact Katya with the hope of reaching Dante. This is all in service of confirming that the manuscript is legitimate and not a ruse. While Barley takes on this task, the British share their intelligence with the Americans including a brash operative named Russell (Roy Schneider.) As Barley gets to know Katya better, he begins to develop feelings for her. This is complicated by his dual responsibilities to country and to keep her protected.

The Russia House is a great little movie if you are okay with a deliberate pace. In an age where every thriller tries to outdo the other with some form of grand stunt or computer generated explosion, it is easy to forget that thrillers can just as easily build suspense through dialogue and by putting characters in extraordinary circumstances. The Russia House does not have any explosive acts of violence, but instead has the threat of violence. Fans of the more recent Le Carrė adaptation of A Most Wanted Man will find themselves right at home here. I have read reviews for the film and was surprised to see that some people found the film boring. Considering that this was one of the first films shot on location after the Soviet Union fell, I am tempted to think that those people saw a different film or have no desire whatsoever to see what Eastern Europe looked like after the Wall fell. Personally, I found myself swept up in the story and setting, and I think that fans of the spy genre will feel the same way.

One of the best attributes of the film is a strong central performance by Sean Connery. Connery has been one of my favorite actors since I was a little boy. I didn’t love him just for his performances in James Bond films but also for his cameo in Robin Hood: Prince of Thieves, his role in The Hunt for Red October, his role in Entrapment (which my sister assured me does not hold up,) and for his role in The Rock. Connery can add a lot more nuance to a role than most actors. After recently watching him in this film and another film (Outland – which I loved,) I feel confident that his commanding presence on screen comes from his eyes. He uses his eyes to convey so much emotion. In this film, his eyes lead the viewer to believe the love story that unfolds even when the script doesn’t quite make the love story feel fully fleshed out.

The bit players are very strong in the film. Roy Schneider is fun to watch as a brash American operative. He is great in every scene he appears in. Filmmaker Ken Russell gives an eccentric and enjoyable performance in a small role. I also really enjoyed James Fox as a British operative in the film. I had watched him recently in The Day of the Jackal, and it was nice to see him in a less villainous role.

Michelle Pfeiffer is a big point of contention in the film. I actually liked her performance pretty well, but if you can not get past Pfeiffer’s accent in the film, this film will probably be dead to you. It took me a few moments of adjustment, but once I got past her accent I was able to focus on the excellent plot of the film. While I felt that Connery was convincing in the love story aspect, her feelings for him seemed a bit forced. I had trouble separating out if this is a failure in her performance or a failure in the script, but after thinking it through I feel that this part of the story was a bit underdeveloped in the film. It could have even been editing that caused this aspect to not completely land. The editor may have cut a scene or two of casual flirtation to speed up the film and accidentally made the love story feel a bit underdeveloped. It’s hard to tell.

Whatever the case, I loved the movie. The scenery in the film is breathtaking. The cinematography by Ian Baker, best known for his work on the film Roxanne, takes great advantage of the Russian cities and landscapes. This film is just wonderful to watch in its’ widescreen splendor. Director Fred Schepisi doesn’t rush the story allowing the viewer to soak in the sights available from Lisbon and London to Moscow and Leningrad. I can admit that I find films that take place in exotic locales appealing and this film is no exception. On top of the great sights, Jerry Goldsmith delivers a beautiful and romantic score that ranks amongst some of his best work.

Overall, while some viewers will be thrown off by the pacing of the film and even though the love story in the film doesn’t quite connect, I found The Russia House really enjoyable.

Twilight Time have done a great job here. The Russia House arrives on Blu-ray with a 1080p MPEG-4 AVC encoded image in 2.35:1 from a 2K scan as provided by MGM. The film is a visual feast. Fine detail is good and in keeping with the era. It was a beautiful thing to see Russia so soon after the Wall fell.

The DTS-HD MA 2.0 track for The Russia House sounds great. This is a dialogue-based film. Luckily, the dialogue is crystal clear. The score by Jerry Goldsmith is very pretty and lends a lot to the romantic sensibilities in the film. I did not detect any hiss or issues. The track is pretty superb but there is not much in the way of immersion due to the lack of firepower in the film.

The Russia House is a thinking-man’s espionage film. The film has strong central performances and is beautifully filmed on-location in Russia. The score by Jerry Goldsmith is excellent. I’m a sucker for Connery and Le Carrè, so this film was right up my alley. The nay-sayers got it wrong on this one. Highly recommended.