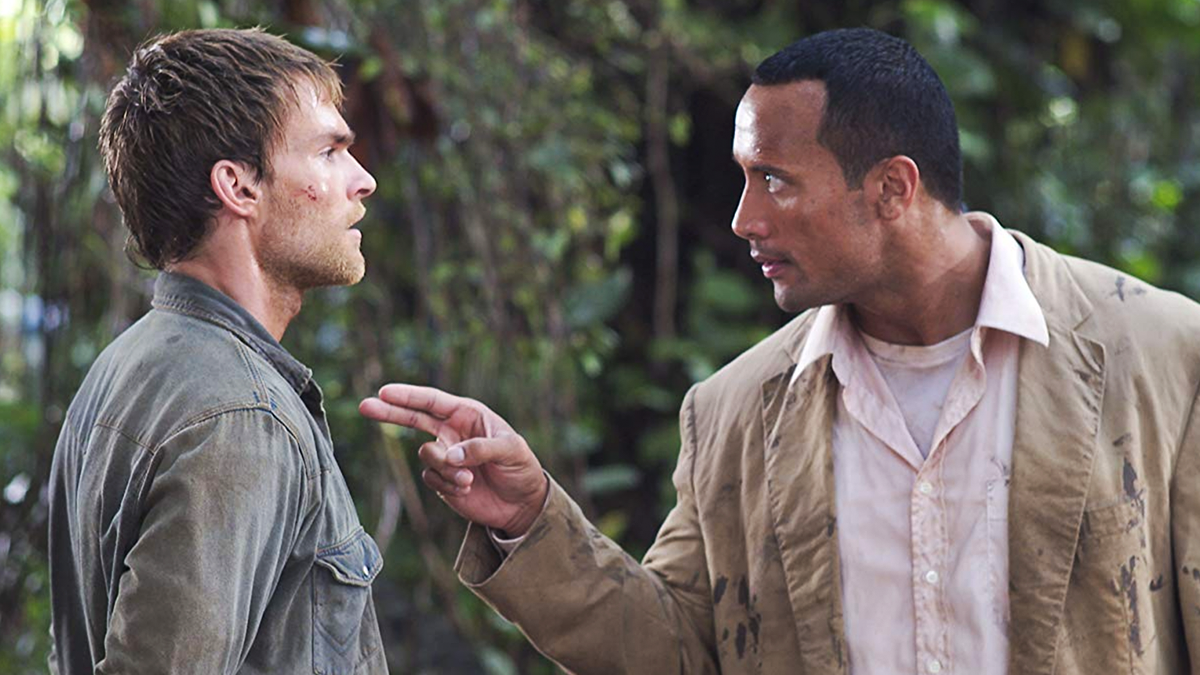 Let’s take a trip back to 2003. George W. Bush was President of the United States, C.S.I. was the #1 television show and Dwayne “The Rock” Johnson was just starting what would be a run at the box office that was only paralleled by Samuel L. Jackson. This was just after Johnson made a name for himself in films like The Mummy Returns or The Scorpion King. He was a “leading man”, though perhaps one of the most typecast actors. To his credit, he’s run with it and is laughing all the way to the bank. Still, there are few to turn to in the action/adventure genre and this was one of his earlier films that actually packed a punch – both literally and figuratively. Add to that a fairly decent cast with Seann William Scott (sharing top billing), Rosario Dawson and the always entertaining Christopher Walken. Hey, it could be a lot worse.

That aside, we find Dwayne “The Rock” Johnson (I’m never going to refer to him as anything else) as Beck, a “retrieval specialist.” Beck owes a large debt to a bookie, Walker (William Lucking) and asks to be set free. Walker offers him one last deal: go to a small Brazilian town called El Dorado to retrieve the man’s son, Travis (Seann William Scott).  Once done, Beck is a free man. I take a line from another movie, though its name escapes me at the moment, “…it’s a snatch and grab job.” But, as it turns out, El Dorado turns out to be run by a ruthless businessman named Hatcher (Christopher Walken). He pays the town’s citizens to mine gold (among other things) and isn’t initially disturbed by Beck. He does request a small fee for the “business” being conducted, however. But things are never easy and Hatcher learns that Travis might know about the location of “the gato” – an extremely valuable artifact. Hatcher wants Travis to find him before Beck hauls him away. The rub, of course, is that things don’t go according to plan. Do they ever?

The film, directed by Peter Berg, was one I’d seen somewhere in my DVD collection, but for one reason or another I’d never made the effort to put the disc in the player. As it turns out, that’s pretty integral. Berg is perhaps better-known for some of his collaborations with Mark Wahlberg like Patriot’s Day, Lone Survivor or Mile 22. Still, Berg is a competent director and does a fine job here. And perhaps it’s just me, but seeing an older film where Johnson still has hair is just a bit eerie. Again, that’s probably just me. Dawson is great in her role as is Seann William Scott, it’s a shame we don’t see him around much anymore. With a film like The Rundown, you know what you’re going to get, but in less capable hands this one could have been a real letdown.

Mill Creek has a fairly impressive catalog of titles, but they don’t seem to take very good care of them. By that, I mean that releasing a film that’s over 15 years old, there has to be some sort of benefit to the buyer. Having never seen this film before, I had no antecedent for comparison’s sake, but it’s clear (pardon the pun) this wasn’t a new transfer. Universal’s 2009 Blu-ray likely has the same video and I’d be surprised if this wasn’t the same one used there. But looking at the 2.35:1 AVC HD image, it’s not all bad. Colors seem bright and bold, though a little too contrasty at times. Then again the jungle does that. Flesh tones seem warm and natural, detail is good, but not great. I saw a bit of artifacting and a tad bit of dirt on the print, but all that said – it’s a passable transfer.

The included DTS HD Master Audio mix is a different story. It’s got some scenes where I was pretty impressed. Vocals, notably Johnson’s deep, commanding voice, are front and center. The front stage handles the majority of the action, but the surrounds light up the ambiance with a few select scenes. The LFE even have a couple of instances in which I really “felt” the action. This is, by no means, a bad track. There are better, but this one does get the job done. And done well.

Unless they’re hiding under a hidden menu on the disc, I wasn’t able to find any supplemental material. And that’s odd as Universal’s Blu-ray (from 2009) features a commentary with Peter Berg along with a slew of featurettes.

A fairly forgettable film and one that I’d always passed on. The Rundown is actually a decent movie and one that bears the moniker of a “Rock” movie. Mill Creek’s disc is fairly disappointing with zero supplements, a ten year old transfer and the only included “extra” is a DVD of the film. If you have the Blu-ray issued by Universal, I’d keep that one.