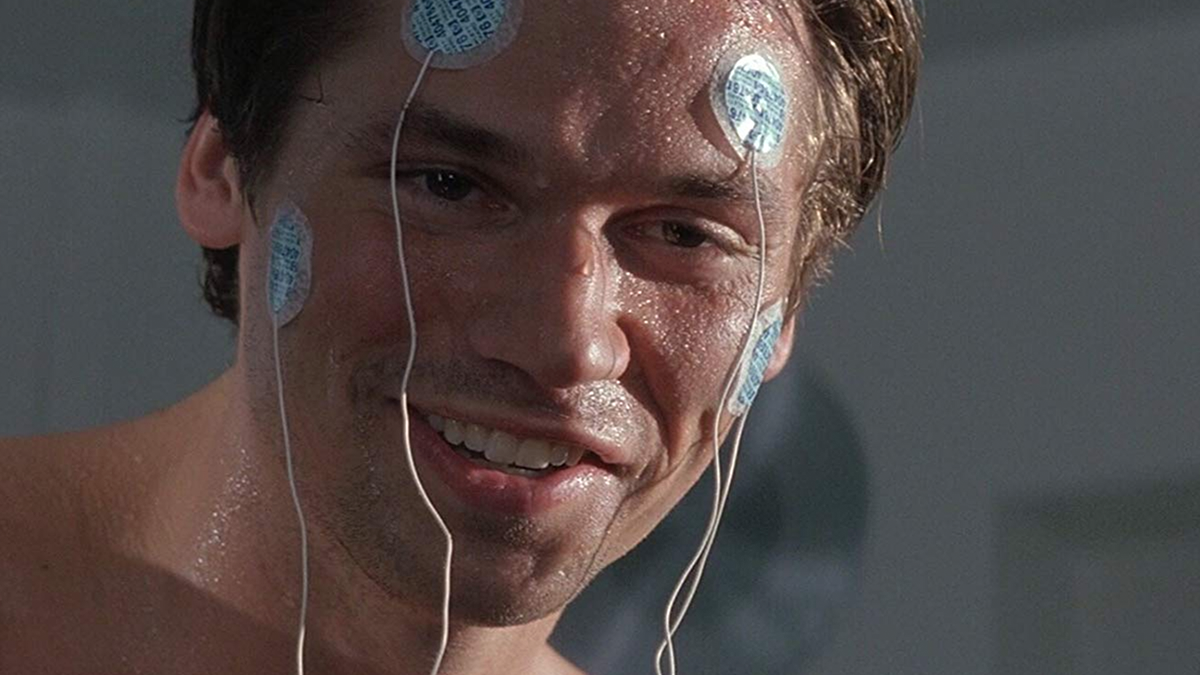 A spaceship lands in a quiet, Midwestern town with the aliens latching onto humans and controlling them. Donald Sutherland leads his crew of top-level government agents to try and figure out what’s going on and stop them from multiplying. Sutherland plays CIA agent Andrew and his son, Sam (Eric Thal) is also an agent. Teamed with a NASA specialist, Mary (Julie Warner) they try to study the flying saucer that’s landed and figure out just what they want. A few kids first see it and begin charging the locals to peek inside the spaceship to have a look. The aliens resemble slugs and latch onto humans and are able to take over their brains and control them. Sam falls victim to this first, and obviously this is personal to his father. If this all sounds sort of like Invasion of the Body Snatchers, well it is. It’s based on the novel by Robert A. Heinlein and was actually published before Body Snatchers.

I always recall hearing of this film and seeing the case at the video store back in the day. For one reason or another, I never got around to seeing it. This review marked my first viewing. I was quite surprised by how much I enjoyed it. I’m not usually a Science Fiction fan, but this one just seemed to work for me. The pacing is quick and the acting is solid and the general premise intriguing. I also like that things never become overly complicated. There might be some viewers who want a deeper or, dare I say, more thoughtful film, but this one kept me with it. I was also surprised by how well the effects held up by today’s standards. There are some intense sequences, and the creatures never looked fake or phony. The premise itself is nothing groundbreaking, but it’s handled nicely here. There are also some rather touching moments such as when Andrew is trying to communicate with Sam after an alien has latched onto his body. I won’t reveal too much, but these scenes add depth to the film.

I don’t see myself revisiting a film like this too often, but I’m giving it my recommendation nonetheless as it’s definitely worth a viewing. It just isn’t something that I think demands multiple viewings. If there is a nit to pick it’s that the film can seem a little too easy at times. Without getting into specifics, there is a bit of predictableness to it. This wasn’t a huge blow to me, but I’ve seen films like this before take a few more risks. Not to sound contradictory, but I almost think it worked for me here. I suppose it’s never a terrible thing for a film to be easily digested. There might be some with certain expectations for a genre like this to be expecting the film to go in other directions. All things considered, I’m glad I was able to secure a copy for review and finally get to see this film.

The AVC encoded 2.35:1 transfer looked just fine to my eyes. This was released in a 2-pack years back, but this marked my first viewing, so I can’t compare. The print was fine and clean and details were strong. There were maybe some scenes displaying softness, but nothing that became too troublesome. I think fans should be pleased.

The DTS HD track did seem more limited than I would’ve liked. The vocals were a bit more muted than I am used to. There isn’t as much detail here as I’ve been so accustomed to. It’s not a terrible track by any means, but it needs more clarity than what we’re given. It didn’t pack the sort of punch that I expected.

While not something that I feel demands multiple viewings, The Puppet Masters kept me with it and proved to be an entertaining film. At no point does it turn into a classic, but it’s well-paced and well-acted and provides plenty of action and thrills to cover its running time.