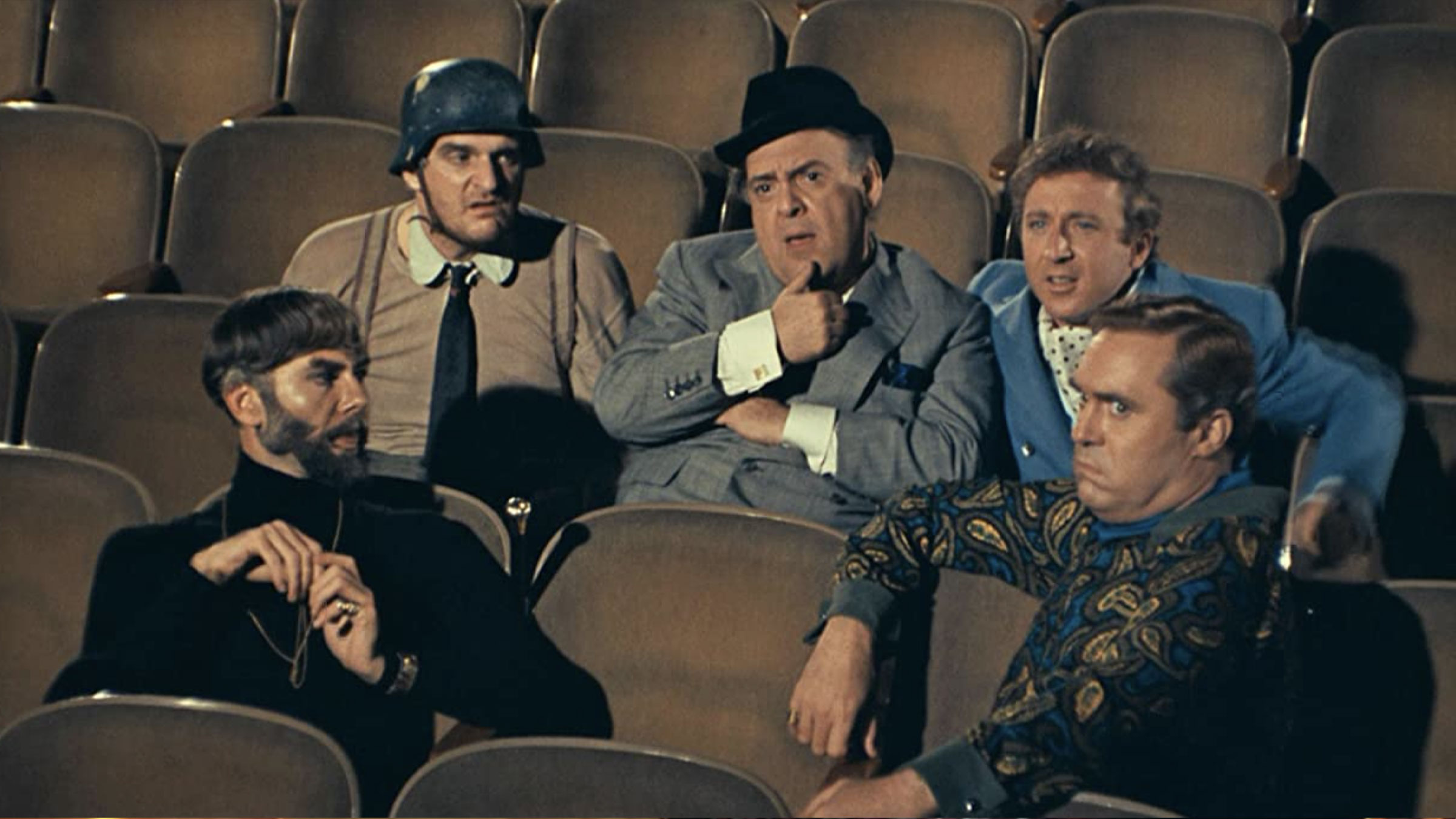 There’s a lot that can be said about Mel Brooks. Perhaps he might be one of the funnier/more talented directors to ever come around, and that’s saying a lot when you consider how many great funny movies there are out there. But, my short list does include some of his films as being right up there as some of the most entertaining ever made. Films like Young Frankenstein, History of the World: Part I and of course Blazing Saddles are among movies I’ve seen quite a number of times (as have his fans, I’m sure). Though he’s never been recognized with “official” acclaim in the form of an Oscar, he’s been revered as one of the comic geniuses in the last half of the century. Recently, an older movie of his was turned into a very successful Broadway show (much mimicking the film itself), better-known as The Producers. Matthew Broderick and Nathan Lane have taken the helm from Gene Wilder and Zero Mostel, but it’s as enjoying as the film itself. And what of the film?

Max Bialystock (Zero Mostel) is a now down and out “former” Broadway has been. His only fans are lonely old women who, aside from being rather wealthy, seem to think that Max has a thing for them. He does – albeit for their money. Max’s latest distaster has taken a toll on him and the powers that be have sent over an accountant, Leo Bloom (Gene Wilder) to do the books for Max and see what the damage is. While going over the receipts from his last show, Leo discovers that he’s $2,000 over budget and makes the connection that the play wasn’t a hit, he could still stand to do fairly well if he were to raise enough money. This starts the wheels turning in Max’s head as he tries to convince his straight-laced accountant friend to go through with the scheme. And what of the shceme? Max will romance his old lady friends and try to raise one million dollars to produce the worst play in the history of the world! The way they figure it, if it’s so bad, they’ll not owe any of the investors for the play and make out like bandits in the process.

The sheer nature of the story is funny and watching Max and Leo go through the casting process is just as funny as any of Mel Brooks’ movies. From the casting of Hitler (the play they intend to do is a musical entitled “Springtime for Hitler”), to casting the director with his, uh, assistant. Truly, The Producers is almost as funny as it gets. The recent Broadway play has brought even more attention to the film as art imitates life here. Whether or not you’re a fan of Mel Brooks, his humor is always evident, and though he really hasn’t had a bonafide “hit” since his Star Wars parody, Spaceballs, I still consider him one of the comic geniuses of the last half century. For a good time, pick up this disc as the transfer is great and though the extras aren’t as plentiful as some would like, it’s quality not quantity that counts.

Kino isn’t known for their restorations, but The Producers benefits from a brand new 4K scan that breathes new life into this classic. Admittedly, it’s been quite some time since I sat down and watched the film, but right away the clarity, color and sheer depth of the picture really stood out. Flesh tones are a bit on the warmer side, but I won’t fault the transfer for that. It’s as if, on some minute level, everything that has plagued the previous releases of this is now gone and what we’re left with is a stunning-looking image that’s sure to please.

We get a choice between a 5.1 mix as well as a 2.0 mix. You’ll rarely hear me say this, but I’d forego the 5.1 mix and stick with the standard 2.0 offering. There’s nothing wrong with the audio, but it certainly doesn’t stand up to the soundtracks of today. Then again, it doesn’t need to. Dialogue is very clear and clean, free of any distortion or mess you might find with a film of this age. At some key points during the movie, the surrounds kick in to add some depth, but for the most part you’ll find a very basic mono mix here. Aside from that, I’ve no complaints.

It appears as if most of the supplements from the previously-released DVD have made the leap to this Blu-ray.

Fans of Mel Brooks will have no doubt checked this one out. While I find of some of his later titles a bit more entertaining (Blazing Saddles, Young Frankenstein and History of the World: Part I to name a few), this is the one that started it all. Kino’s new disc shows off a stunning picture as well as a new audio commentary. It’s worth picking up.