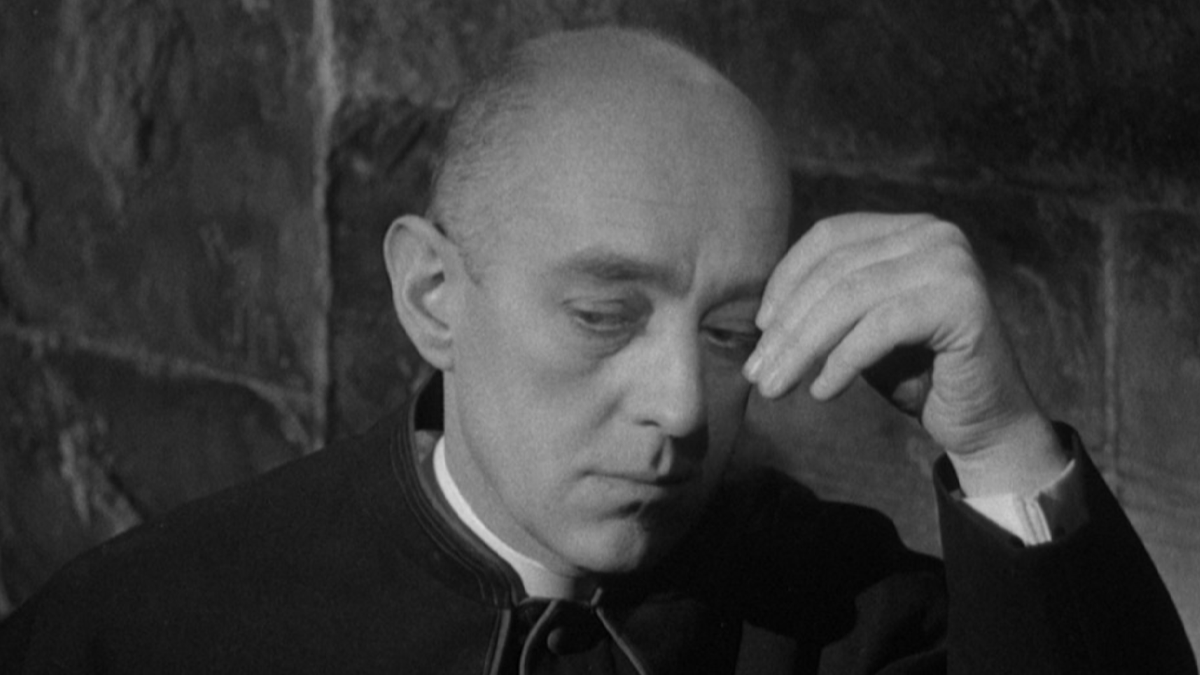 Alec Guinness was one of the greatest actors to ever practice the profession. Before being immortalized as Obi-Wan Kenobi in Star Wars, he was the genius actor in such films as Kind Hearts and Coronets, The Ladykillers, Our Man in Havana, and The Bridge Over River Kwai. Guinness could play any role. He was a true chameleon if there ever was one. When I saw that Arrow was releasing a little known film starring him in the lead role, I was excited. The Prisoner was based on a play by Bridget Bolanos who also penned the screenplay. Peter Glenville directed the film. The film was controversial when it was released despite its lack of nudity, cursing, or notable violence. It was banned in Italy and was not allowed to be screened at the Venice and Cannes film festivals. The film was controversial due to the ideas it explored. It has been sixty four years since it was released, so does it feel controversial today?

As the film begins, a Cardinal (Alec Guinness) in an unnamed Eastern European country is arrested for treason against the state. He is arrested after performing mass and he lets some people in his congregation know that any confession given by him will be a lie. The interrogator (Jack Hawkins) that he faces was once his ally. They both took part in the resistance during the war against the Germans and the Gestapo. The interrogator came from a good family, but had served. The state must force a confession from the Cardinal due to the Cardinal leading the people apart from the party’s directives. There is no room for religion in the party controlled state. Due to his service in the war, the Cardinal is a monument that needs to be defaced. The movie takes place almost exclusively at the prison as the interrogator tries to break down the priest through any means necessary.

The Prisoner is essentially a morality play. Watching the pious Cardinal as he is broken down by his interrogator is intellectually interesting and also difficult. The Cardinal has some chinks in his armor that make him all the more human, and the interrogator is not completely inhumane. One of the greatest aspects of the film is that it leaves the audience wondering who has succeeded by the end of the film. There is a scene where the interrogator looks through prison windows and it becomes obvious that the system for which he works has trapped him into doing things he can not possibly believe to be right. It is a great moment and one of many moments that count on the audience to use their minds.

The film features two excellent performances. Alec Guinness is wonderfully cast. He had played the role in the theater prior to the film version. Surprisingly, Guinness was not a practicing Catholic until two more years after filming the movie. He had me fooled. He is fantastic in the film. Jack Hawkins is believable as the interrogator. He allows the interrogator to be both insidious and sympathetic – not an easy order for any actor. Both men give nuanced performances that make the film come alive.

The film itself was based on a play and it shows. There is very little that happens in the film that could not be played on a stage. There are some small details – such as when a young man is shown being murdered by a Gestapo-style soldier for painting a slogan on a wall in protest – but, overall, almost the entire film takes place in two rooms. Fans of plays on film will enjoy the movie, while some will feel like the film is a little too claustrophobic for their liking.

The writing by Bridget Bolanos for the most part is excellent. There is a small storyline involving two people outside the prison walls that seems tacked on and totally unnecessary. Aside from that the film really works. The film is filed with great lines with my personal favorite being, “try not to judge the priesthood by the priests.” The dialogue all feels very intentional and thought out.

One of the most interesting parts of the film was how it was controversial but people could not decide what was controversial about the film. People denounced it as pro-communist, anti-Catholic, and anti-communist. That is a sign of solid writing and should alert viewers to the intentionally vague nature of the film. I will let you draw your own conclusions from the film as I have drawn my own. That only serves to make the film more personal an experience.

The transfer provided to Arrow Video by Sony/Columbia looks pretty great. Here is what the booklet details:

“The Prisoner is presented in its original 1.85:1 aspect ratio with mono sound. The High Definition master was provided by Sony Pictures Home Entertainment.“

The transfer is provided in its original 1.85:1 aspect ratio in 1080p with an MPEG-4 AVC encode. The image looks pretty great, which should come as no surprise given Sony’s track record.  The video transfer has some specking and is not quite as cleaned up as Sony’s transfer for Our Man in Havana. Fine detail is pretty strong, and I can not think of any real reason why fans would not be pleased with this transfer. I think it is safe to say that this will probably be the definitive transfer of this small release.

The LPCM mono track that Sony provided to Arrow sounds pretty good. Dialogue is clear and I did not detect any noticeable hiss. As can be expected, this is a dialogue driven film and there is not much opportunity where a surround track could have helped the proceedings. The score by Benjamin Frankel is forceful and utilized well in the film. There is nothing to complain about here.

The Prisoner is a thought-provoking film. Alec Guinness and Jack Hawkins shine in their respective roles and the film is very well written. For people that like movies that deal in religion and politics, this film will be of interest. I really enjoyed the film and the challenging thought process the film put me through. The supplements are a little bit light for an Arrow release, but I agreed almost verbatim with everything that Neil Sinyard said in his piece. I hope that Arrow utilizes him in future releases! Overall, it’s a small scale film with big thoughts. I enjoyed it.