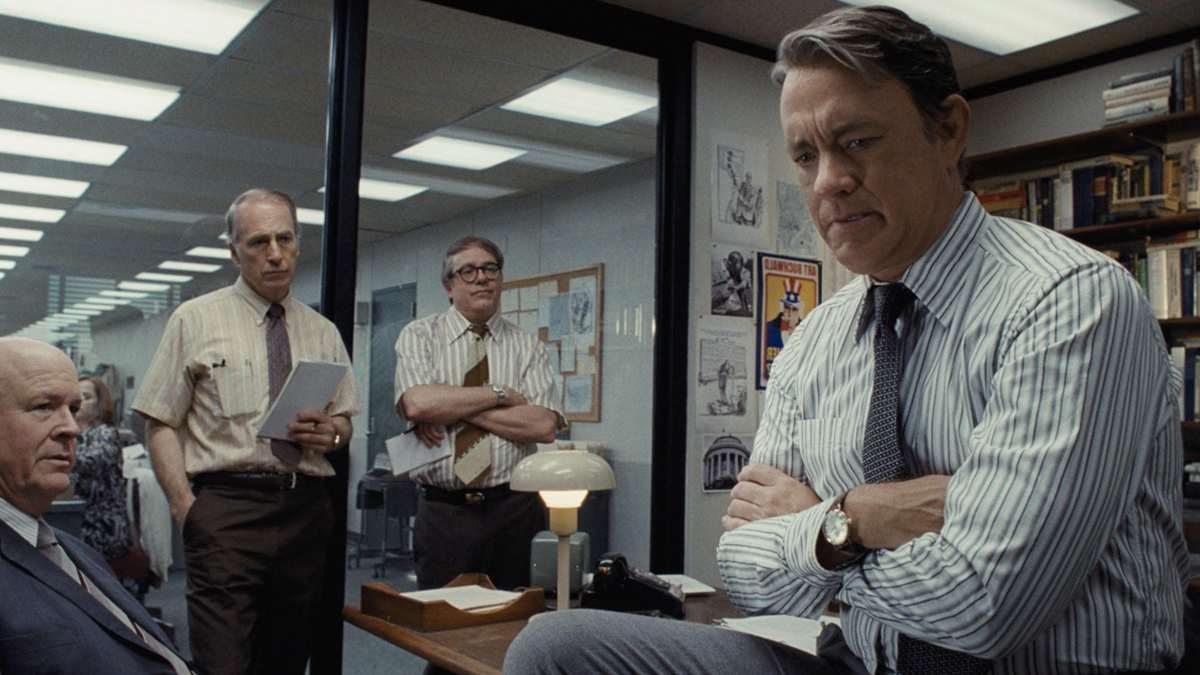 I’m willing to bet that it’s no coincidence that we’ve got a film like The Post. Directed by Steven Spielberg and starring Tom Hanks and Meryl Streep, the film couldn’t have struck at a more pertinent time. The President of the United States (I won’t even take the time to type out his name as it angers me to do so) has referred to the media as the “enemy of the people” and any news outlet that dare criticize him is regarded as “fake news.” Uh huh. Add to that his little feud (one of several who dare speak out against him) with Streep, calling her an “overrated actress” and, well, let’s just say that the stage is set. The film takes place in the early 70’s and serves as somewhat of an unofficial prequel to All the President’s Men, but it doesn’t take much to connect the dots regarding the actual meaning of the film.

Going on the assumption that the viewer is at least somewhat familiar with the players from All the President’s Men, we meet legendary editor of the Washington Post Ben Bradlee (Tom Hanks). Bradlee gets wind of the Pentagon Papers, government documents that state that the United States knew for years that the country was fighting a losing war in Vietnam. President Nixon and the White House file an injunction to stop the publishing any more of these than they already have. This gives Bradlee and opening and he instructs his team of reporters led by Ben Bagdikian (Bob Odenkirk) to acquire the papers so that the rest can be published. However, it’s not as easy as that and Bradlee must first convince the owner of the Post, Katherine Graham (Meryl Streep) to do so. Obviously, they risk prosecution. She’s got to make a choice that will have long-lasting implications in the world of journalism.

The way we report news (aka “journalism”) has certainly changed over the years. With the internet things happen at record speed and tried and true journalism measures like “checking your source” are a hard thing to come by. But it’s films like this and Best Picture winner Spotlight, that show the power of a good story. As for Spielberg’s film, there’s very little to dislike. If you’re into this world of hard-hitting facts, government cover-ups and doing the right thing for the greater good, The Post will deliver on all accounts. The film was nominated for Best Picture and Streep for Best Actress (which is nothing new). Hanks was passed over for an Academy Award nomination, but we all know that matters not – he delivers a great performance and it’s one worthy of Jason Robards’ Oscar-winning performance of the same character in All the President’s Men. One might thing that with all the star power in this film, something would get lost in the shuffle. I’m happy to report (pardon the pun) that isn’t the case.

No doubt Spielberg was trying to pay homage to the time with this film and Fox’s Ultra HD presentation is nothing short of spectacular. The 1.85:1 HEVC 4K image suffers a bit from time to time, but it’s by no means a bad thing. If anything, it’s welcome since I tend to prefer a more “gritty” look and feel. I was halfway tempted to watch All the President’s Men before watching this just to get myself in the mood. That said, everything we’ve come to expect from a day and date release is present here. Detail is amazing, colors bold and even with the 70’s color palette it looks good. This won’t leave viewers disappointed, that’s for sure.

The included DTS HD Master Audio soundtrack is the same one found on the Blu-ray (also included in this set) so we don’t get a Dolby Atmos mix here. Then again, it’s not like we need one as this track hits all the right notes (so to speak). Don’t let the subject matter fool you either as we do get some shots of the Vietnam war to start things off. The room shakes. Vocals are strong, rich and pure, surrounds resonate John Williams’ score and we get a good array of pulsating sound to keep the viewer entertained. It’s a good mix.

With Steven Spielberg, Tom Hanks, Meryl Streep and John Williams – you’ve got the unquestioned leaders of filmmaking in the last few decades. This delivers on the hype and while I felt that All the President’s Men was a bit more authentic, there’s plenty of entertainment value in The Post. Fox’s 4K disc looks and sounds great and though the supplements are a bit pedestrian, it’s a worthwhile addition to your collection.