The Night Before (Blu-ray)

After his parents were killed years prior, Ethan (Joseph Gordon-Levitt) was devastated. His world was shattered. That’s where his two friends, Isaac (Seth Rogen) and Chris (Anthony Mackie) came in. It became an annual tradition to go all out and party all night. In the later years, Isaac and Chris have moved on with their lives, but Ethan hasn’t quite gotten a grip on things. He works odd jobs here and there, but has yet to settle down. Since life and other things have gotten in the way, they all agree to have one last celebration before putting the tradition to rest for good. As Ethan is working the coat check, he comes across three tickets to what’s supposed to be the party to end all. He calls Chris and Isaac and the mayhem begins. This includes a lot of singing in clubs, a stop at Chris’s moms house, an ugly scene at Midnight Mass and plenty more. There might not be much of a plot here, but it’s fun following this trio around for a night on the town.

If there’s one thing to say about the film it’s that the cast seemed to have a great time making it. For the most part, the audience can have a bit of fun as well. Just keep your expectations reasonable. There are plenty of big laughs to be had, but also a lot of repetition. The role isn’t really a stretch for Rogen, but he does a fine job as well as Mackie and Gordon-Levitt. There are also plenty of surprises including a hilarious turn from Michael Shannon as a drug dealer the friends call when they’re in a bind. Shannon plays the role straight, letting the dialogue get the mileage. His delivery is spot-on and works because he doesn’t try to oversell it. Some of the shenanigans include the gang getting separated and Chris gets caught up chasing a thief who uses older movies as her MO. These include references to Die Hard and Home Alone of all things. There’s also an extended bit were Isaac (under the influence of drugs) meets up with his wife and causes a ruckus at midnight mass. Ethan has a few bright moments as well. The film does a good job at giving its characters their moment. There’s the expected amount of vulgarity and childish behavior, but there’s also a heart underneath it all. Things never become heavy-handed, but it works enough. The issue comes from the flimsy plot getting stretched a bit too thin by the last half. Some tightening could’ve helped matters here. Still, the pros outweigh the cons here. It might not be a new holiday classic, but The Night Before more than earns its keep as a worthy comedy.

I’ve come to the realization that my thoughts on the video section can seem a bit monotonous at times, but Sony continues to impress. I think the standard with Blu-ray discs in general has come so far, that unless an image is strongly lacking, I have a hard time finding fault. The print is shiny and clean with no issues, details are always strong and colors nice and smooth. The image is AVC encoded with a 2.35:1 ratio. Fans will be pleased.

The DTS HD track is as expected. The rear channels kick in when needed, mostly from background city noise and during a few of the scenes in clubs. There’s a nice bass at times and vocals remained clear and audible throughout. As with the video, this track accompanies the film nicely.

Inconsistent and a bit too long, The Night Before still has enough laughs to recommend it. I don’t think it’s the finest hour from Seth Rogen and pals, but it gets some good mileage from the main trio. Supporting characters also garner some laughs, especially from Michael Shannon. It’s at least worth a rental. 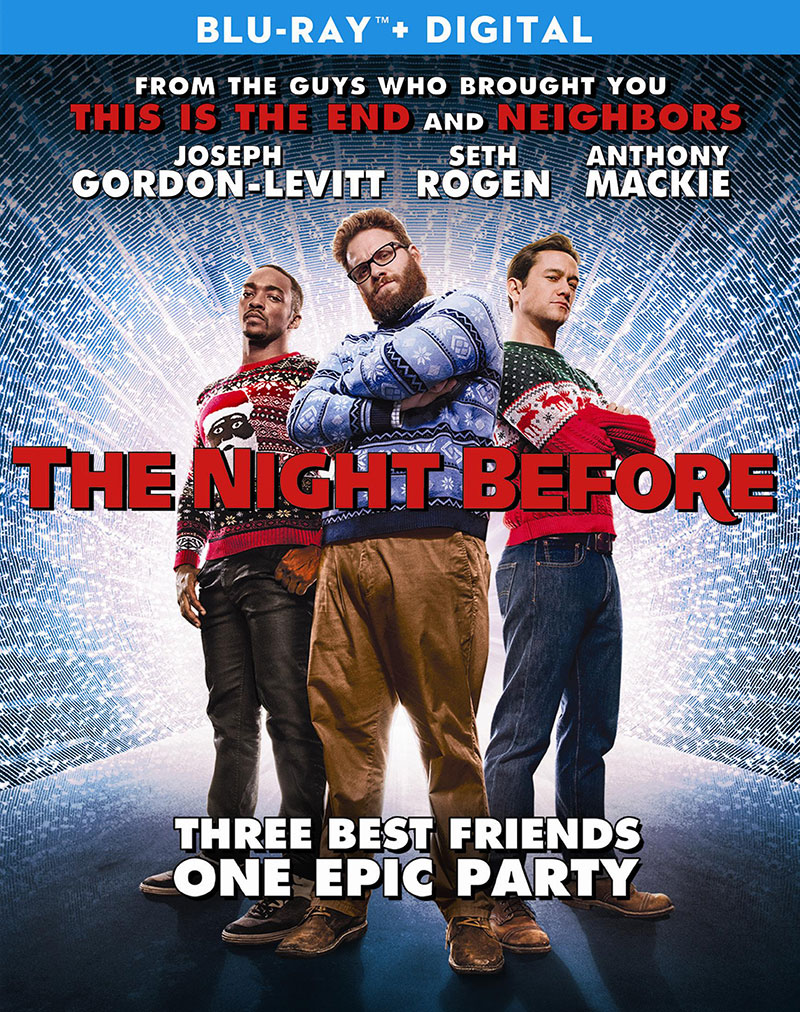