With the success of the first two movies, the third can coast through on name recgonition alone. And, in a sense, that’s what this one does. Sporting the same cast as the first two movies, The Naked Gun again takes up right after the previous one left off. Drebin (Nielsen) has since retired from Police Squad and has now been married for six months to the lovely Jane (Priscella Presley). Jane is now a practicing lawyer and Frank is a house-husband who still can’t cook, but boy can he clean! What’s most noticeable about this Naked Gun, though, is the time frame in which it came out. Judging from the Theatrical Trailer included on the disc, it came out on Friday, March 18, 1994…now that’s just a few months prior to one of the most talked about events in recent history. Of course, I’m referring to O.J.’s ill-fated car chase all through Los Angeles. O.J. is indeed in the third movie, once again reprising his role as Nordberg, though his part is not that big.

Drebin, now retired, misses police life (actually he misses not being able to shoot anybody), and has since been given his own memorial alongside the likes of Wyatt Earp and others. Now content to be a homebody who watches soap operas all day long, the Police Squad needs his help one last time. Posing as an undercover man at a sperm donation clinic, Drebin is trying to assist the Police Squad in hopes of catching the lovely Tanya (None other than Anna Nicole Smith, Miss May 1992…I think) and her boyfriend, Rocco (Fred Ward). Rocco has just escaped from prision and for a price, has agreed to blow up the Academy Awards! Posing as a fellow inmate, Drebin is in full undercover mode to try and crack this case and help out Police squad. Of course, this being the last in the series, we see that Frank again dons his disguises (which all look strangely like him) and posing as Phil Donahue at the Oscars, he is bound and determined to find the envelope with the bomb in it.

The Naked Gun 33 1/3 wraps up one of the most hilarious trilogys that I can think of, though the reins are now in Director Peter Segal’s hands. Segal stays with Zucker’s directing style and keep the slapstick to an all-time high and it might as well be Zucker directing. Segal, better known for directing “Tommy Boy” got a good taste of what a hit feels like, as this was fairly successful at the box office. In my opinion, I will always think of this as O.J.’s last movie, rather than the ending of the “Naked Gun” series…but that’s just me.

We’ve got good news and bad. The good news first! I’m pleased to say that the final installment in this trilogy looks better than its predecessors. That’s to say that the 1.85:1 AVC HD image looks a bit cleaner, sharper edges and an overall better image quality. The bad is that this, like the others, have not benefitted from any sort of restoration or new transfers. Granted, I realize these films aren’t Citizen Kane, but the fan base is pretty robust nonetheless. Suffice it to say that the same problems persist that were present in the previous DVD release.  It’s about as half-assed effort as one could imagine from a major studio.

A remixed, but very active DTS HD Master Audio mix has been included which replaces the previous Dolby Digital track found on the DVD. There are a few explosions and surround effects that make it stand out as compared to the others, and the dialogue sounds natural and very clean as well. While most of the action takes place within the front three channels, certain scenes make theirselves known with a very powerful soundtrack. Comedies are known for being dialogue-driven, but this has the best of both worlds.

Again, like The Naked Gun 2 1/2: The Smell of Fear, all of the supplements that were present on the DVD are gone. That’s a few trailers and a commentary track.  Hmmm…

The Naked Gun films will forever stand as a part of my childhood and into my teen years and are some of the funniest that I’ve seen. While it’s nice to have these on Blu-ray, it’s sad that absolutely no effort was put into these discs at all and supplements were not only added, but actually taken off these discs from the previous DVD’s. That’s a head scratcher. 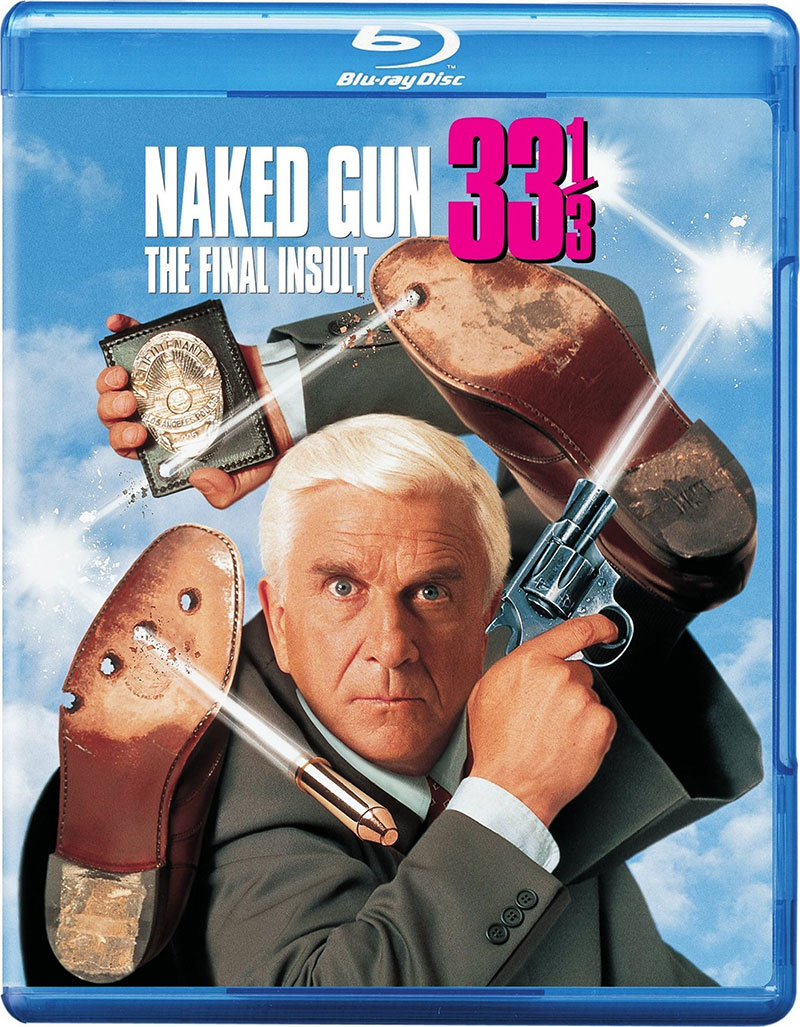