I was watching an old episode of The Simpson’s and Bart asked Homer “what’s a muppet?” I can’t exactly remember Homer’s response, but it did get me thinking…what really is a muppet? As a kid, I watched The Muppet Show on TV and I remember some of the early movies, but with the passing of Jim Henson (the show’s creator) in 1990 it would seem that these “characters” might dwindle into relative obscurity. Not so. With the newest installment in this franchise, and make no mistake – it is a franchise, there have now been five feature-length films after his death and only three prior to it. Henson and his creations, though not having quite the impact as Walt Disney’s creations, have lived on and prospered for another generation to experience.

In The Muppets we find Walter (voiced by Peter Linz), a puppet who watched The Muppets on television his entire life. His older brother Gary (Jason Segel) is also his best friend. Gary decides to invite Walter on his trip to Los Angeles along with his girlfriend, Mary (Amy Adams). While in the City of Angels, they’re planning on visiting Muppet Studios and while doing so, Walter overhears a disturbing conversation. It seems that an oil tycoon, Tex Richman (Chris Cooper), is going to tear down the studios (in need of money) and drill for oil. But there so happens to be a clause in the contract that if Kermit and company can raise $10 meeeeeelion (sorry, had to do a quick Dr. Evil reference there) dollars, everything’s fine. But the Muppet gang is scattered to the four corners of the Earth and getting them all back is not only required, but it’ll help raise the funds. Oh my God! What will happen to Muppet Studios?

Part of the fun with the film is that it doesn’t take itself too seriously. I’ve always enjoyed films that aren’t afraid to make fun of themselves as that’s the inherent fun. The script, written by Jason Segel and Nicholas Stoller, is jovial and fresh and the two are obvious fans of the Muppets. For anyone who’s seen one or more of the previous films, yes there are some star cameos but I won’t say who and ruin the surprise. As expected, there are plenty of songs to boot and with Amy Adams front and center we know what we’re in for. In fact this “Wocka Wocka Value Pack” comes with a code that allows you to download the soundtrack, so if you feel the need to belt out these tunes in your car or at the gym – feel free. In truth, The Muppets is one of those movies that’s just hard to dislike because it’s so darn fun to watch. It’s no surprise that it won an Oscar for Best Song (and with a 50% shot at winning it was as close to a sure thing as can be at the Academy Awards). Muppets fans rejoice – they’re back!

This 1.78:1 AVC HD transfer looks about as good as I imagined. The bright, bold colors shine in just about every scene and detail is excellent. You can make out the textures on every creature (real or not), wispy hairs on the Muppets’ fur is easily noticeable and Amy Adams’ ginger locks look like you could reach out and touch them (and I wanted to)! Contrast is strong and black levels are near perfect. Let’s face it, if The Muppets doesn’t feature a bright and shiny transfer, what will? This one will look great on your HDTV, iPhone, iPad or wherever else you view it.

Equally impressive is this robust DTS HD Master Audio soundtrack. There are songs galore and they all sound amazing, from the opening sequence to the numbers in between. The 7.1 channels seem to always be in motion (if you will) and something that really grabbed me was the Muppets going from one frame to another – I forgot they did that. Vocals are strong and consistent with surrounds offering up plenty of action in the rear. Let’s face it, if you can find something wrong with this audio mix then you’ve got something on me (which isn’t saying much). A top notch effort!

There are a few different versions of The Muppets out there and this “Wocka Wocka Value Pack” seems to be the best out there. We start off with an audio commentary by Jason Segel, Nicholas Stoller and director James Bobin. This movie is obviously a labor of love and this commentary is a testament to that. It’s a fun listen, full of information about the film, the script and more. “Scratching the Surface” is more of the same humor found in the movie as it somewhat pokes fun at the “Making of…” featurettes found on most films. Eight deleted scenes are also showcased as is the full, uncut “Tex Richman” song. If you wanted to hear it all, this is your chance. We also get some spoof trailers (all are included) and we see the Muppets as they read through the script. The Blu-ray Exclusive is rather unique in that it’s “The Longest Blooper Reel Ever. At Least In Muppet History… We Think” as it’s just that. An extended blooper reel that once again takes the tongue-in-cheek approach. And, as mentioned, there’s a code where you can download the soundtrack via Disney Movie Rewards. 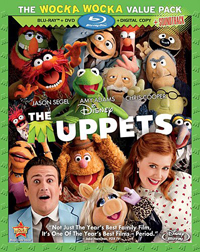