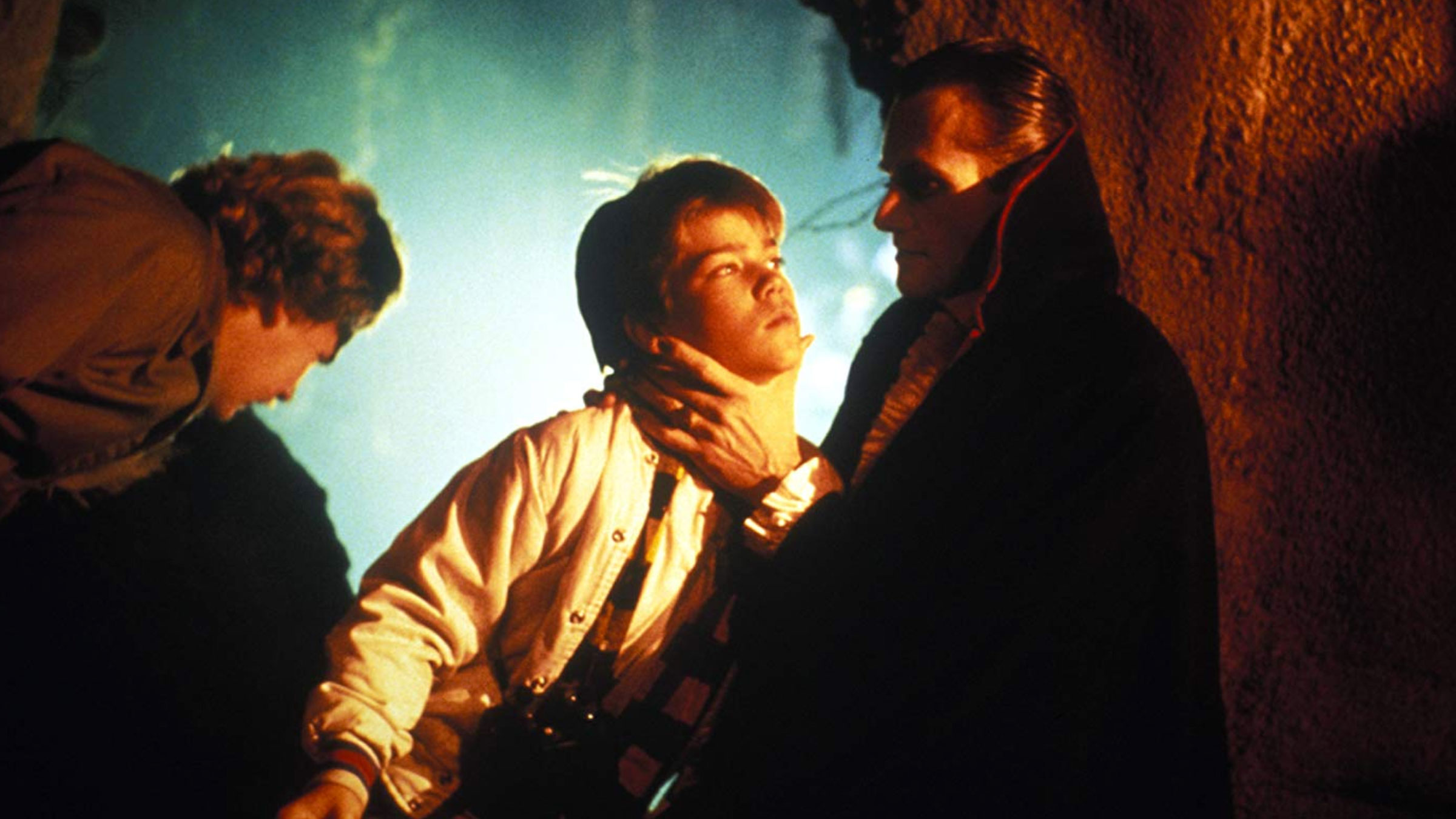 Very recently I had the opportunity to watch the movie Night of the Creeps by director Fred Dekker. I really enjoyed the movie. It is goofy and fun and it plays with a lot of cliches in ways that I found interesting and entertaining. It was basically a love letter to the horror and science fiction films of the previous half century. After watching that film, I immediately ordered myself a copy of the Olive Films Blu-ray of his next feature, The Monster Squad. Given that Night of the Creeps was rated R and this film is rated PG-13 and starring a bunch of kids in the lead roles, I knew to expect it to be more family friendly. As I was watching it, I just kept thinking that if I had known about this movie as a kid, I would have watched it with friends like we watched The Goonies. The Monster Squad is another fun mash-up film, but this time Fred Dekker and Shane Black’s script drew upon classic horror characters from the Universal horror films and packaged them into a Eighties family film. After watching the film I could not wait to watch it with my two boys.

As the film begins, the screen reads, “One hundred years before this story begins… it was a time of darkness in Transylvania… A time when Dr. Abraham Van Helsing… and a small band of freedom fighters… conspired to rid the world of vampires and monsters… and to save mankind from the forces of eternal evil… They blew it.”

The film starts in 1887 with Dracula’s tomb being raided by Van Helsing. Van Helsing dispatches a couple female vampires and then brings in a virgin to read an incantation. As they attempt to speak an incantation in front of a glowing jewel, a portal to another dimension opens up and swallows them. The film cuts to Los Angeles in 1987. Twelve year olds Sean and Patrick get in trouble with their principal for drawing monsters during science class. They are part of a monster club – a group of kids that meet in a tree house and discuss monsters. Meanwhile, Fat Kid a.k.a Horace is bullied by two kids, Derek and E.J. Luckily a slightly older kid named Rudy arrives and saves the day. Horace asks Patrick and Sean if Rudy can join the monster club. Sean’s little sister, Phoebe the Feeb, isn’t allowed to join. They agree to let Rudy join if he passes the monster test which consists of knowing facts about monsters. Meanwhile, an airplane carrying coffins is disrupted by some noises in the back. Dracula, in the form of a bat, has stowed on board. He takes a crate carrying Frankenstein’s monster off of the plane and it lands in a swamp. Sean receives a book in the mail written by Abraham Van Helsing in German – his journal. Sean’s dad, Del, is a policeman and his marriage is suffering from the needs of his job. Del is called in to work instead of going to marriage counseling because a man comes in to the station claiming to be a werewolf and wanting to be locked up. An officer shoots the man at the police station, but in the ambulance he turns into a werewolf. Across town at a museum, a 2000 year old mummy has walked out of his exhibit. The mummy, Dracula, and werewolf meet up in the swamp. Out of the water, the Gill monster raises up the coffin holding Frankenstein’s monster. Dracula revives the monster. Sean sees that he received a message from a Mr. Alucard looking for the book from Van Helsing. He plays with the name and makes the connection that the letters when reconfigured spell Dracula. When Sean overhears the events of his father’s night, he calls a meeting of his friends and forms the monster squad to try to stop the monsters before more people die. Dracula and the monsters want to get Van Helsing’s diary from the boys at any cost. The boys will need to pair with an elderly German man to take down the monsters.

Fans of Night of the Creeps will be happy to see that the same sense of humor and adventure made the leap into Fred Dekker’s second film. While the film stars young kids, they talk much more like kids do – cursing and using double entendre. I imagine that this probably led to some parents feeling uncomfortable with their children watching the movie. That said, parents that are comfortable with their kids watching The Goonies or Gremlins should feel right at home here. I watched the film with my two boys and they absolutely loved it. Also, despite a briefly voyeuristic scene, there is no nudity in the film. The kids that they chose for the main roles are all great in the movie. There is not a clunker in the group. When Horace mans up late in the film you will want to high five a friend.

These types of movies just aren’t made anymore. It is strange to me that the movies we seem to want our kids to consume lack so much of what made these films so fun. Every kid’s movie nowadays tries so hard to reach the adult audience, but what I like about Monster Squad is that it reaches your inner child by simply being a terrifically fun and over the top kids movie. This movie was written by two horror nerds who were part of the first generation to be influenced by Spielberg, and it is the most enjoyable kids movie I watched this year.

If you have a couple kids, my recommendation would be to check it out and have some fun.

The video presentation of The Monster Squad probably will not scare away fans of the film but it probably will not thrill first time viewers. With an AVC encode in an aspect ratio of 2.35:1, the film looks pretty good. The issue with the presentation is that it is fairly soft for a Blu-ray presentation. After seeing the fantastic work that Shout!Factory put into the recent release of Fred Dekker’s film The Night of the Creeps, this transfer just pales in comparison. It’s a shame that the transfer wasn’t given more tender loving care because honestly the movie has a lot visually to offer. For now, this is the best the film has looked but there is definitely room for a substantial improvement. What is on display still looks good, but I will double dip if a new transfer is ever released.

Olive Films have provided a good sounding DTS-HD MA 2.0 stereo track. Dialogue is clear and crisp. Effects are loud and robust at times. Interestingly, the old Lionsgate release had a 5.1 Surround option that I would love to hear and compare. Based on what I heard here, the movie sounded pretty good but it is a bit of a downer to not have the option of the full surround mix.

Unfortunately, this disc has no supplements.

The Monster Squad is a fun film that keeps its demographic in mind while never condescending. The kids in the movie sound and act like kids. I watched it with my two boys and they both loved it. Fans of The Goonies and Gremlins should find themselves right at home here. The film itself is easily one of my favorite kids movies but Olive Films have not put much effort into this release. While the film looks and sounds pretty good, there is still room for improvement. Fans will be happy to be able to acquire the disk at an affordable price but it feels like a shame that there is not a true collector’s edition that fans can really display.