It’s hard to believe that there was a time, not too long ago, that Disney didn’t own the entire animation marketplace.  Ok, ok…I know – stop you heathens before I continue!  I realize that nowadays there are other “leaders” in the animation industry, but when we’re talking classic animation, most of us think of Disney.  Gone were the days of Snow White, Fantasia and Peter Pan. It was the late 80’s and Disney’s animated films were along the lines of The Great Mouse Detective and Oliver and Company.  By no means were these movies bad, but they just weren’t synonymous with what the world had come to expect from Disney.  However a little mermaid with a fiery red mane and a desire to become human changed all that and, in many ways, might have just changed the entire face of Disney to come.  You see, due to the success of The Little Mermaid, it in turn paved the way for other movies to come after it. I’m talking Beauty and the Beast and Aladdin to name just a few.  One would have to wonder how different the face of animated movies from Disney would be had The Little Mermaid tanked at the box office, but as is stands this one little movie had quite the long-lasting impact.

It’s hard to believe that it’s been nearly 25 years since this movie was originally released and being a Disney movie, the plot isn’t exactly difficult to follow.  We meet Ariel (voiced by Jodi Benson), a mermaid who wants nothing more than to go to the surface world. She collects little tidbits of things that reside at the ocean floor and wonders what it’s like to see an actual person.  However King Triton (voiced by Kenneth Mars) has warned his daughter of the dangers of the surface world and, being a “teenage” girl, she refuses to listen.  Triton assigns Sebastian (voiced by Samuel E. Wright) to watch over her but to no avail.  Ariel instead heads to the surface world with best friend Flounder (voiced by Jason Marin) along for the ride.  And in nearly record time Ariel falls for a human prince, Eric (voiced by Christopher Daniel Barnes).  King Triton finds out and confines Ariel to her room. She escapes.  She then makes a deal with the proverbial devil in Ursula (voiced by Pat Carroll) by sacrificing her voice to be human.  Is Ariel destined to be Ursula’s slave or will things work out in the end?

Watching The Little Mermaid for the first time in years made me realize exactly how far we’ve come in the animation field. I realize that computer animated films, popularized by Pixar, have given these a new perspective but even traditional 2D animation nowadays looks uber-realistic.  To be totally honest, I’ve found other Disney animated realizes to be more entertaining like Aladdin, Mulan and Beauty and the Beast. That’s not to say that this film doesn’t have some good moments, but I felt it played more to females than males (and bear in mind when this came out I was in High School – not exactly the target audience). Of course we can’t forget that it’s a classic Disney film with songs that you most likely know by heart (especially if you have children) like “Under the Sea” and “Kiss the Girl.”  Still, this movie has earned its place in the pantheon of Disney cinema classics and rightfully so.  With this first release on Blu-ray, we get just about everything you’ve ever wanted in one package.

This new version does feature a new transfer as opposed to the one that was used on the film’s 25th Anniversary Diamond edition. While I didn’t do a side by side comparison, it’s clear (pardon the pun) that this new Blu-ray is the real deal. Compared to some of the newer animated films, it does seem a bit dated, but this is far and away the best the film has ever looked (a 4K version does exist).  Colors pop, the lack of dirt on the print is a sight for sore eyes and everything seems to flow better.  Ariel’s red hair literally lights up the screen. Having said that, compared to some newer releases I found some of the “exterior” scenes to still be a bit on the dingy side. This is what prompted my comment about how far animation has come.  It looks fairly dated, but considering what the animators go through to bring a film to life – I’ll let them off the hook as it’s evident that a LOT of work has gone into this release.

Unlike the video, it seems that the same DTS HD Master Audio mix that was used on the previous Blu-ray version is being used here. That’s fine, because it sounded surprisingly robust there. And, without a doubt, this is the best that the movie has sounded.  The vocals seem to have more pop to them, the surrounds seem to offer more of an audio “experience” and the entire soundtrack as a whole sounds much better. Again, having said that, there are some bits here and there that still seem to somewhat lack any depth.  I found a few of the lines of dialogue to be a bit thin and some of the sounds seem to be manufactured.  Well, they are, but you get what I’m saying.  But, like the video, the audio is by far the best this has ever sounded.

I’m losing count of the number of times Disney has issued this disc, and I’m guessing that so long as people continue to buy it, they’ll keep churning them out every five years. So let’s take a deep breath and get started, because not only is there some new content, but most all (if not all) the previously-released content is also available, albeit most of it digitally.

Most of the content from the previously-released 3D edition is still accessible, although most of it is now digital. Please check out our review of The Little Mermaid: 25th Anniversary 3D for a breakdown of those supplements.

There’s no denying it, The Little Mermaid brought Disney into a new era, one that’s not subsided in three decades (and I’d be surprised if it ever does). This is about as classic as it gets. No doubt anyone who’s read this far has seen the film and if not, well, there’s no time like the present. It’s fun for the whole family and the bullet point list seems to grow with each incarnation. Top line video and audio along with a wealth of supplements make this one a no-brainer. 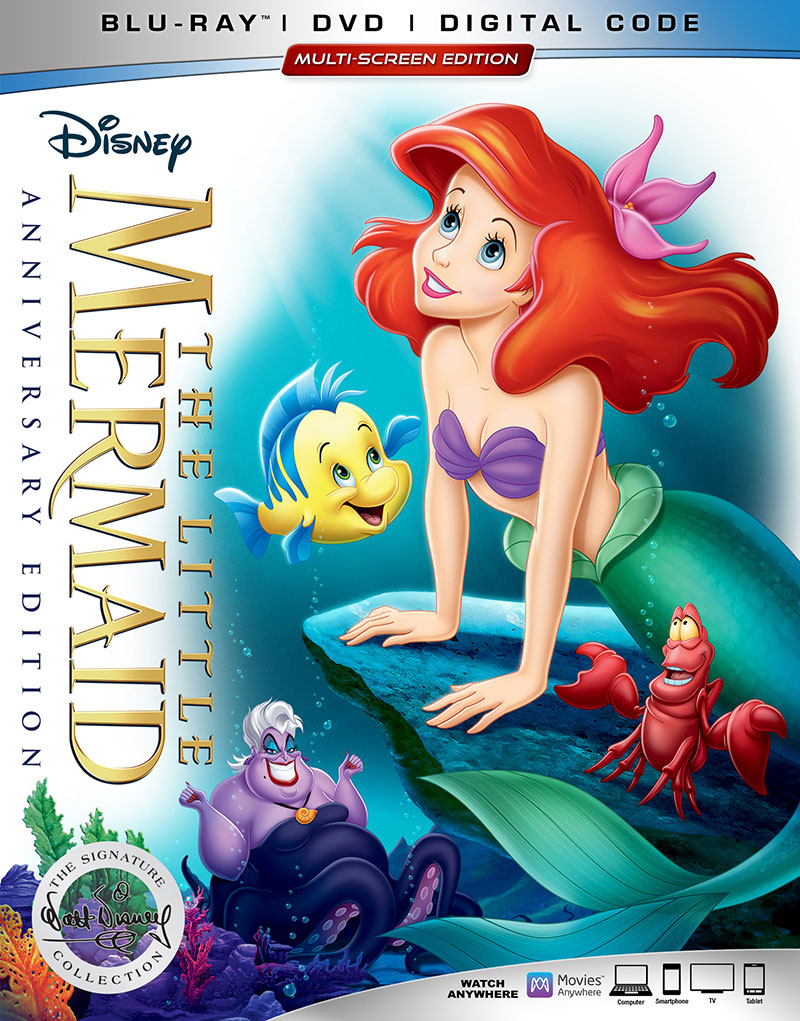