The Life and Times of Judge Roy Bean (Blu-ray) 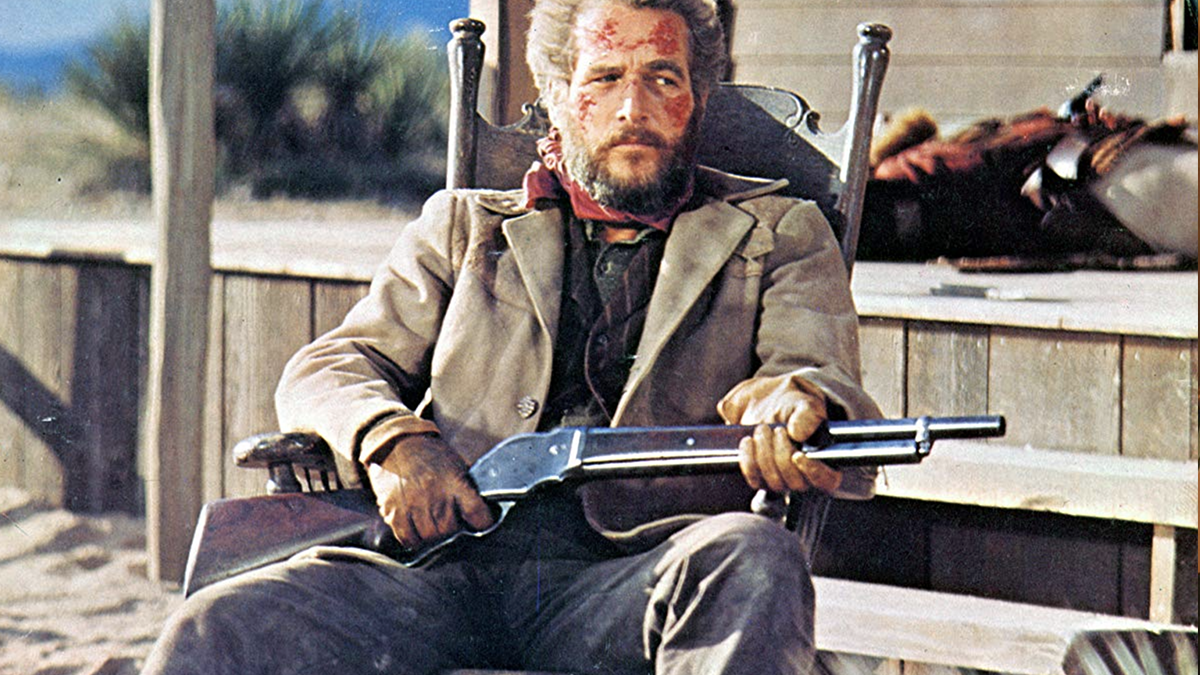 Near the turn of the last century the Pecos River marked the boundaries of civilization in western Texas. West of the Pecos there was no law, no order, and only bad men and rattlesnakes lived there…. Maybe this isn’t the way it was… it’s the way it should have been.

So begins the unconventional Western-Comedy-Drama The Life and Times of Judge Roy Bean. Starring Paul Newman, with a script by John Milius, this is one of the strangest films I have seen in a while. The director John Huston was capable of directing any type of film that he decided was worth his time. One of my favorite films that he helmed Under the Volcano, has a similar look to this film and a little bit of the looseness in this film. What stands out about the film, even more than the direction, is the off-the-wall script by Milius, but I don’t want to get too far ahead of myself.

Roy Bean (Paul Newman) walks into a saloon and orders a drink. He announces himself to the whores and lowlifes within and let’s them know that he just pulled off a robbery and made his way to this side of the Pecos because he had heard it was favorable to men like himself. The people within the saloon see this as a great opportunity to beat him up, rob him blind, grab his gun, and drag him outside. They put a noose around his neck and attach it to his horse’s saddle and set the horse free. He barely survives this episode when the rope snaps. A young girl brings him a pistol and despite his wounds he manages to kill every last person in the saloon. He posts up outside the saloon with a shotgun and waits for the buzzards to come. When traveling Reverend Lasalle (Anthony Perkins) comes to town, they bury the dead. Roy proclaims himself the new judge of the area. He lets the town know there will be peace, and he doesn’t care who he has to kill to keep it. When a rough gang comes into town, he deputizes them. It is not long until the town he presides over becomes an actual town. Roy promises to do everything in his power for Texas and Lily Langtry – a performer that he loves based upon posters he has seen of her. The marshals marry prostitutes and they quit the trade. Soon enough the gallows justice of the judge begins to lose favor in the town.

The script by John Milius is pretty bonkers. I did some research and it turns out that there was a Judge Roy Bean who lived from 1825 until 1903. Hollywood made two movies about him before this film. Milius completely changed the timeline of his life to where the main character could live to see the early times of Prohibition and the oil boom. This script obviously has little to do with the actual historical figure but is used as a basis for Milius to have as much fun as possible. In one of my favorite scenes a man shoots a poster of Lily Langtry and is killed. The judge rules it justifiable homicide. These types of over-the-top shenanigans happen repeatedly in the film and if you are not on board, the film will be lost on you. This is a film where the main character keeps a bear as a pet for a decent amount of time in the film, if that gives any indication of what you might expect watching it.

This film was not a critical success upon release, but Paul Newman is undoubtedly fantastic in it. John Houston’s directing style at times was a bit looser than I would have preferred, but I can’t tell if that adds to the madcap nature of the film or subtracts from the enjoyment of the film. There are some wonderful cameos and supporting performances. Stacy Keach has an incredible cameo as an albino bandit. Ned Beatty is solid as one of the deputies to Roy. Roddy McDowall is perfectly cast as the uptight lawyer that is the antithesis of Roy’s style of justice. There is not a bad performance in the film.

Overall, this film is not perfect. There are parts of the film where pacing completely falls apart, but there are definitely moments of brilliance as well. If I gave this film a grade it would probably receive a “C+.” It is this close to being absolutely fantastic, but the parts are a bit greater than the sum. I would advise a rental prior to a purchase, but I can guarantee it is unlike any Western you have seen before (with a little bit of The Ballad of Cable Hogue and McCabe and Mrs. Miller as the closest to compare.)

The video transfer presented in 1080p in an aspect ratio of 1.78:1 looks pretty good. One of the things that will stick out to anybody watching the film is that the film is a fairly soft focused affair. This is not due to the transfer, but a cognizant choice made by John Huston. If you have seen his film Under The Volcano, the look is similar.  Fine detail is good for the most part, but the soft focus techniques occasionally will make the film look a little muddy. Colors in the film are sometimes fairly muted, so expect the film to sometimes look pretty washed out also. Overall this is another good transfer from Warner Archive, but the film itself is not going to blow away people just because of this format.

The Life and Times of Judge Roy Bean has been given a well-done DTS-HD MA 2.0 track. I enjoyed the score by Maurice Jarre whenever it showed up in the film, lending some energy to the odd proceedings in the film. The dialogue for the most part can be heard, but sometimes I had difficulty hearing what the characters were saying. I couldn’t tell if this was a sound design issue or if the actors just kept whispering. Either way, I found that a little annoying.

The Life and Times of Judge Roy Bean is a fun and entertaining film that is not quite like any western I have ever seen. Read that as a warning just as much as an invite. I highly recommend a rental prior to a purchase, but I enjoyed the film overall. The transfers by WB Archive are competent, but the source itself does not shine on Blu-ray like some older films. I really enjoyed Newman’s performance and marveled at some scenes in the film.