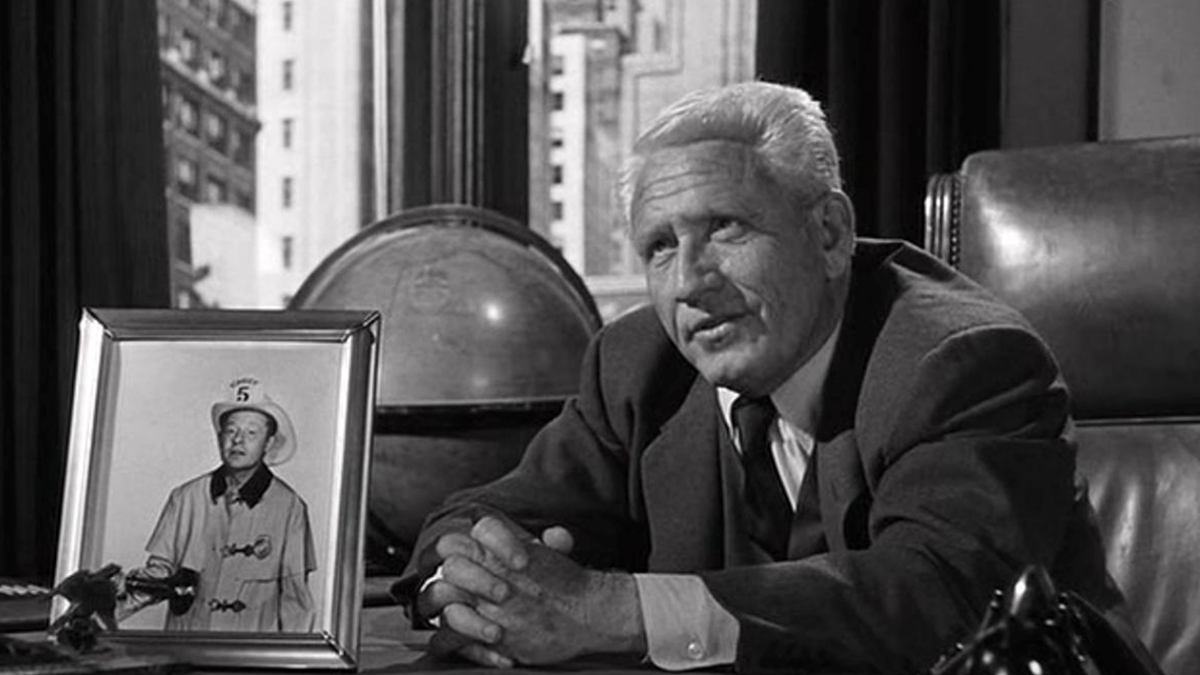 Twilight Time recently released the John Ford film The Last Hurrah starring the great Spencer Tracy. This film is a natural fit for the Twilight Time label for three reasons. It is based on a literary work like much of their catalog. It is about politics which the label has embraced in other works. Nick Redman and Julie Kirgo wrote and directed a film on John Ford called Becoming John Ford. If it was up to me, all of Ford’s films would have commentaries by the crew at Twilight Time or by Joseph McBride who wrote the definitive book on Ford. I will admit that I was excited to watch the film because I am a bit of a political junkie. My father was involved in politics as I grew up and it had a profound impact on me. I read political histories fairly often and love films about the political process, so this seemed right up my alley.

The storyline of the film takes place in an unnamed New England city. The plot revolves around Mayor Frank Skeffington (Spencer Tracy) as he mounts his final mayoral campaign. Skeffington is not without opposition in the town. His morality is questionable from the outlook of his constituency, but he has been in power so long that he has a lot of friends as well. One of Frank’s greatest opponents is newspaper magnate Amos Force (John Carradine.) They have a grudge between them that dates back to their childhoods. Frank calls upon his nephew Adam Caulfield (Jeffrey Hunter) to join the campaign when he realizes that his nephew has a job at Amos’s paper. Adam agrees to serve as a spectator to the final leg of the campaign and the men grow closer together while Amos helps a young candidate named Kevin McCluskey enter the ring against Frank.

This is a pretty good film. Spencer Tracy is excellent in the lead role. I like him in pretty much everything I have seen him in, but this film plays to his strengths. Jeffrey Hunter is good in the su[porting role even if the role doesn’t demand much from him. The cinematography by Charles Lawton Jr. is very well done and one of the best aspects of the film. John Ford wields his usual control over the actors and gets good performances across the board.

There is one issue that I had with the film. The character of Skeffington was loosely based upon the life of Boston politician James Michael Curley and the character of Kevin McCluskey was based on John F. Kennedy. For a political film that is loosely based on real people, the film does not have much bite. The film seems to idealize Skeffington warts and all which, given the history of Boston politics, I felt that approach was a little strange. For a political film, the film seems to shy away from politics. The film wants us to like a Skeffington so much that the character becomes a bit less interesting than if he had been given a character flaw or two.

That said, the final quarter of the film (despite dragging its feet during the finale a little bit) has a real quality to it. I particularly enjoyed the scenes where they focus on the campaign’s election evening results party. I have been to those parties and know the exact feeling of watching results come in at a campaign headquarters. The film captures that feeling very well.

Overall, this is a good John Ford film with an excellent performance by Spencer Tracy and some truly great moments. If it had been just a little bit less reserved, it could have been truly great.

Columbia Pictures and Sony have provided an amazing new transfer in 1080p with an MPEG-4 AVC encoding in 1.85:1 aspect ratio. Whenever Twilight Time release a Columbia Pictures title, videophiles should take notice. Sony have proven themselves time and again as some of the greatest film restorers in the industry. Their efforts on this film are undeniable. This film maintains enough grain to form incredible amounts of fine detail. The black and white cinematography by Charles Lawton Jr. looks beautiful on Blu-ray with a very crisp image. Sony have proven with their releases that they are every bit as capable as the Criterion Collection at preserving film.

Twilight Time have provided a DTS-HD MA 1.0 track. It has excellent fidelity to the original elements. This film is primarily dialogue based but it can be fairly loud at times. The opening parade is a good example of how loud the track can be, but moments like that are pretty irregular in the film. The dialogue is clear and I did not notice any noticeable hiccups in the audio.

The Last Hurrah is a good film. If it had been a little more caustic it could have been a great film. Spencer Tracy gives an excellent performance and John Ford capably directs. Twilight Time have provided an incredible transfer from Sony/Columbia Pictures. The commentary track is excellent as well.