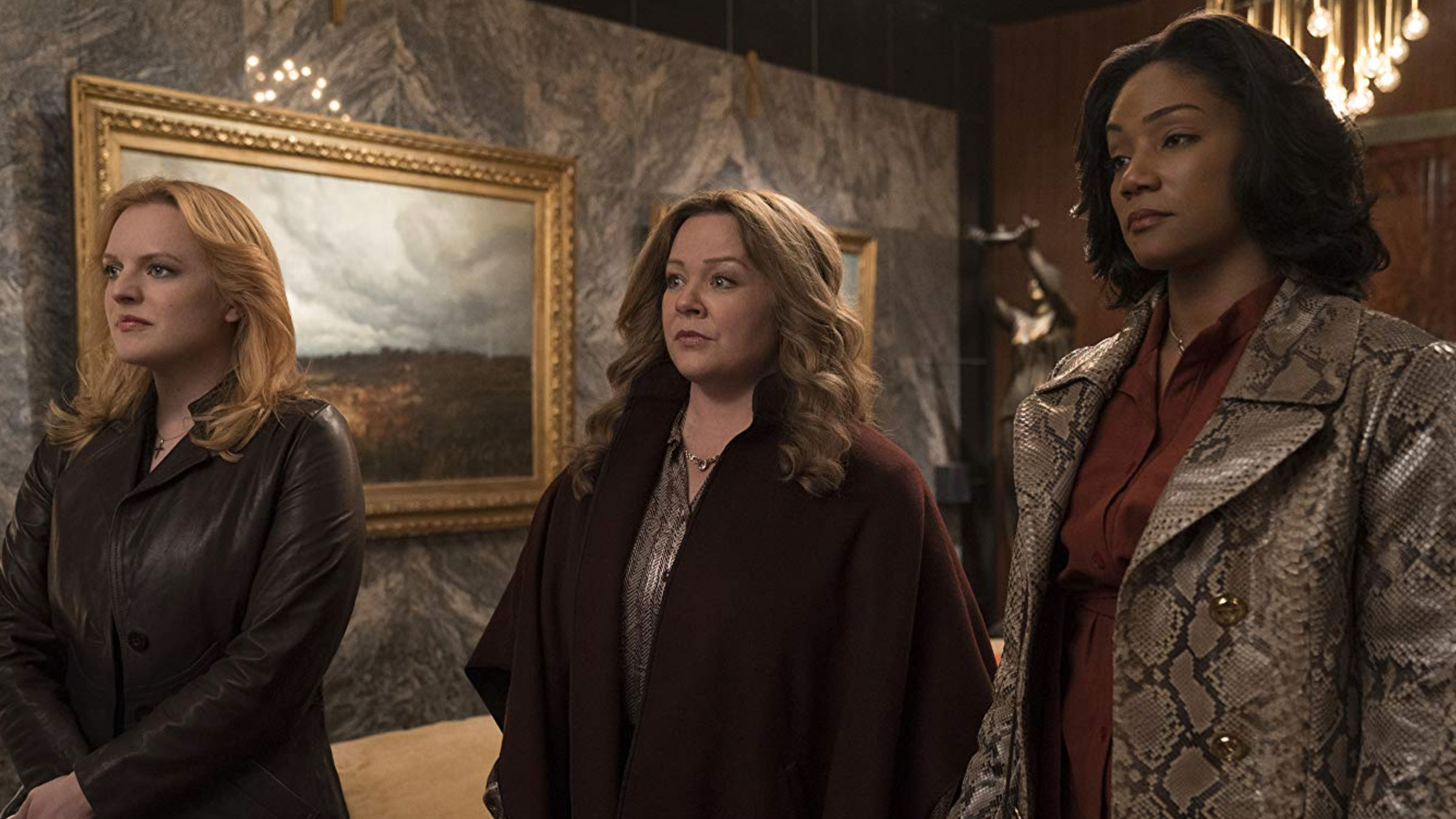 For as many movies as I do see in theaters, there are still some (for whatever reason) that I hold out on and wait for Home Video, or streaming, if you will. The Kitchen falls into this category as there were a few occasions that I was close to biting the bullet, but kept putting it off. The short window from theaters to disc or streaming services these days also makes it easier to hold off. The film features performances from Melissa McCarthy and Tiffany Haddish in the lead roles. McCarthy’s comedies are hit-or-miss with me, but it’s always nice to see her in a more dramatic role and mix things up. While I feel the performances in the film are solid, they didn’t stand out and have the pop that I’d expect, but ultimately the film does just enough right to warrant a rental. Let’s see what we’re dealing with here.

Set in the late 70’s and based on the comic miniseries of the same name, the film follows the wives of three mobsters who take over their husband’s duties after they’re arrested. Melissa McCarthy plays Kathy Brennan who has two children and her husband is Jimmy. Tiffany Haddish is Ruby and her husband is also arrested and she joins her other two lady friends when she realizes she needs to protect herself after her husband is locked away. Lastly, there’s Claire Walsh (Elisabeth Moss) who is a bit more hesitant to join the other two, but decides that she’s finally tired of abusive men pushing her around. Their husbands are all sentenced to three years in prison after being busted by FBI agents. Little Jackie Quinn (Myk Watford) becomes the head of the mob and assures the ladies that they’ll be taken care of, but the money isn’t enough to satisfy them, thus pushing them into this life even more.

There’s a lot going on in The Kitchen, but it kept me with it. The film does get better as it progresses. There are characters named Jimmy and Jackie and some elements can feel familiar and a bit clichéd, but I was still happy to go along with the ride. I think where the film excelled was in its unpredictability. I was never quite sure just how things would turn out. I’m a fan of mob films, especially those from Director Martin Scorsese. Sadly, this doesn’t come close to that level, but it works well enough to satisfy. I feel the majority of the critics were a bit too hard on it. When I saw the trailers I feared it would be another Widows type of film that we saw last year. Thankfully this doesn’t try to push some female empowerment theme. It simply shows three women who choose to step up after they’ve been hit with a roadblock. The plot throws a bit too much at us for a film that’s under 2 hours, but it also moves along at a nice pace and gives enough insight to not feel too undercooked. While not perfect and not even great, I still feel this one’s worth checking out.

Even looking at the cover art made me think that this film would have a very unique look and feel to it. And, sure enough, it does. Set in the early 70’s in New York City, the film has a very subdued color palette. It’s done for effect, obviously, but everything has a somewhat muted look which gives it that hint of authenticity. Warner’s 2.40:1 AVC HD image isn’t lacking with depth and dimension, however. Detail is razor sharp and while some of the more “earthy” tones tend to dominate, I felt that it was just what the film needed to give it that “edge.” It looks good.

The included DTS HD Master Audio mix is just what was needed, though there are some spots in which I found myself straining to hear what was said. I assume this was intentional and not a fault of the audio. Apart from that, it was a solid, strong-sounding mix. There are a few scenes in which all speakers are engaged and, let me tell you, those are the ones to watch for. I generally have no complaints.

Far from perfect, but also far from the disaster that most critics would have you believe. The Kitchen kept me with it. The central premise is simply enough to draw us in, then the world expands. I liked that part. I enjoy mob films and this one has familiar elements, but also feels fresh at the same time. Give it a chance and you just might enjoy it.