Looking back, I think Russell Crowe might go down as one of the better actors we’ve seen.  True, when I first saw him in his first big role, L.A. Confidential, I wasn’t sure what to think.  But as time has progressed, he’s shown a wide variety of roles and even secured a Best Actor Oscar with his portrayal of Maximus in Ridley Scott’s Gladiator. Crowe has chilled out over the years as well, once very outspoken and, dare I say it…a jerk; he’s now settled into this “new” lifestyle and continues to take some risks.  His recent turn in Les Miserables might make us wish he’d never take another singing role again, but it does show range to be sure.  Back in 1999 Crowe’s only claim to fame was L.A. Confidential and when he teamed up with Director Michael Mann for The Insider, a look at the tobacco industry (always a hot topic), things changed for him.  Of note, this title was among the first that I received from Disney for a site I’d just created – DVD Authority.  How time flies.

We meet Dr. Jeffrey Wigand (Russell Crowe) as he’s packing his things and leaving his former job. He’s just been fired from Brown & Williamson tobacco.  His life is a good one, two imported cars in the garage, membership at a Country Club and a doting wife who no doubt loves her lifestyle and her husband (most likely in that order).  Wigand is getting used to change.  His Audi is now a Volvo and his mansion, now a more pedestrian that the rest of us can relate to.  It’s when 60 Minutes producer Lowell Bergman (Al Pacino) contacts Wigand to conduct an interviews that his life really begins to change.  Should he do it, he’ll risk the safety and security of his family.  But his morals take over and he decides to do it under the guise of Mike Wallace (Christopher Plummer).  Is doing the right thing always the proper course of action and is it the true measure of a man who can stand up to the “bullies” of the world, in the case the “Seven Dwarfs” or the CEO’s of big tobacco.

Regardless of your stance, this true story about a corporate whistle-blower is one of Crowe’s best performances.  He put on weight for the role, had his hair thinned and greyed and literally became Dr. Jeffrey Wigand.  Pacino is in top form as well and even as over the top as he is, it seems to work for him here (and the next year in Any Given Sunday).  To me, this is one of those films that has a certain pace to it, though the running time is nearly two and a half hours long, it doesn’t feel like it.  This is due to Mann’s direction and the impeccable acting of Pacino and Crowe.  It’s been nearly fifteen years since I saw this movie, but it’s held up well.  I’d put it in the same arena as All the President’s Men or The Conversation.  Crowe was nominated for an Academy Award for his role here but unfortunately lost to Kevin Spacey of American Beauty (it also was nominated for Best Picture and lost to the same film).  If you’re still trying to shake off Russell Crowe as Javert, and you haven’t seen this film I implore you to give it a try.  All cliché’s aside – you won’t regret it.

Disney’s catalog releases are somewhat hit and miss when they make the jump to Blu-ray, but thankfully The Insider is one of their higher-profile titles and they’ve taken care of it. The result is a very attractive 2.40:1 AVC HD transfer that encompasses nearly every aspect of the color spectrum. Much like Traffic that followed it, the film has a very blue corporate feel to some of it, a very colorful and warmer section and a darker element to it as well. Detail has been improved from the DVD and contrast is rock solid. While a bit of grain and dirt do persist, it’s nothing to get too worked up over. As I mentioned, it’s been some time since I’ve seen this film, but looking at it with a fresh pair of eyes I can say that it’s held up very nicely indeed.

While this isn’t a title that you’d think would sound good, it actually does.  This new DTS HD Master Audio mix is front-heavy, but surrounds and LFE do have their moments making way for a very effective and realistic mix.  Dialogue is at the heart of this film, but there are some moments in which I was really surprised, some little nuances here and there that really stood out.  Certainly if you’re looking for something in which things blow up and the room shakes, you’ll need to look elsewhere but this new mix is the best this film has ever sounded.

Supplements – What are the Goodies?

Unfortunately this is where The Insider falls short in that we get the same production featurette and the original trailer.  I’d have liked to have seen a “retrospective” with Pacino and Crowe, but I guess not. 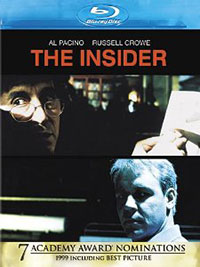