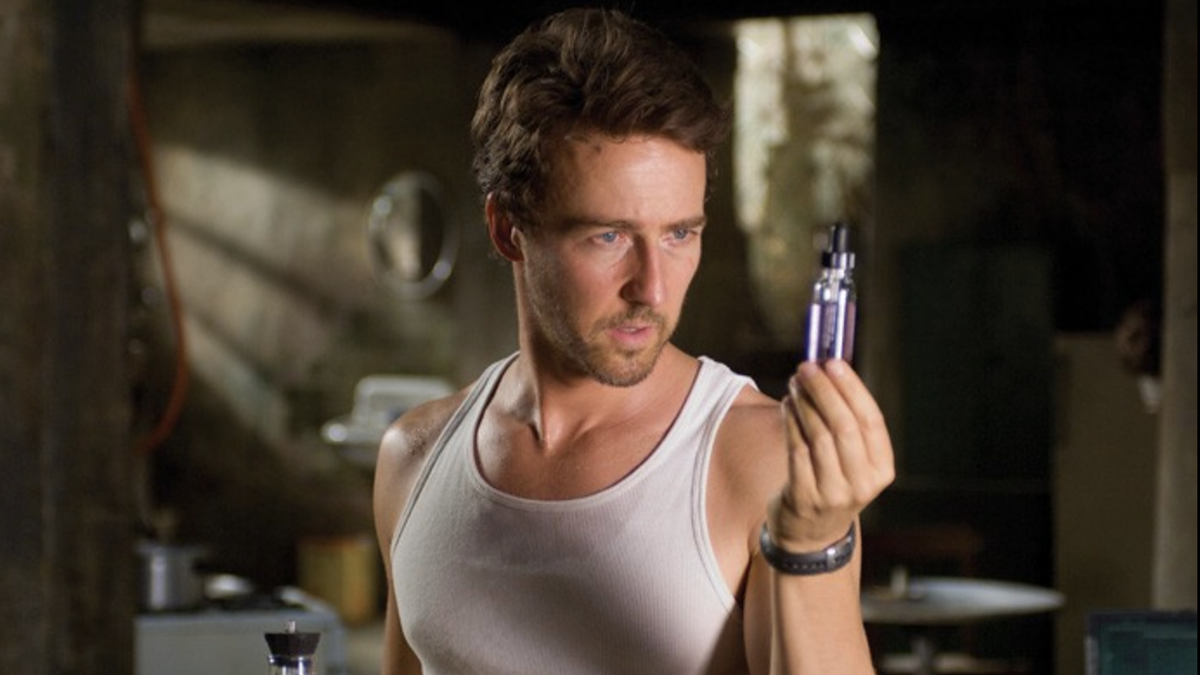 When the first Hulk film arrived in theaters in 2003, it mostly disappointed audiences. It was a superhero film at odds with itself. Director Ang Lee downplayed the action elements and focused more on the troubled inner conflict of the Bruce Banner character. Most audiences (myself included) also didn’t like the 45-minute wait for the not-so-jolly green giant to show up. It was a very uneven and overlong film. It had a reasonable opening weekend at the box office, but a huge second weekend drop. This was clearly not the Hulk film fans had wanted. Flash forward to 2008 and we essentially get a reboot of the character. Edward Norton replaces Erica Bana as Bruce Banner and this time around there’s more emphasis on action. In an unusual move, we see the origin story during the film’s opening credits. It paid off. We all know the basic story of how an experiment goes wrong and Bruce is affected by gamma exposure and if he gets angry…well we all know what happens next. I also like how we’re thrown right into this world. The original film spent so much time trying to dig deeper and deeper into Bruce’s childhood that it lost sight of the fun element. Hulk is clearly a tricky superhero to tackle, but this time they get it right. When you have a character like this, he doesn’t just don a cape and enjoy being the hero, the Hulk is of Banner’s own worst enemy so to speak. The Hulk is also an all CGI character so in a way a connection to the character is lost. I also preferred the look of the Hulk much better. The green is toned down and he’s much more ripped. He has also been given a Tom Cruise like hairstyle.

The film begins with Banner living in a foreign country in a life of solitude. He works at a bottling plant and his only connection to the U.S. is with a fellow scientist simply named Mr. Blue. Banner is Mr. Green. He is sending Mr. Blue blood samples to try to find a cure. After the last test doesn’t work, Blue requests they meet in person. There’s a minor accident at the bottling plant and a drop of Banner’s blood accidentally gets into a soda bottle. The bottle is packaged and shipped to the United States. After a consumer gets an extra kick, General Ross (William Hurt) discovers Banner’s whereabouts. The film has three major sequences with the Hulk, including the climax. This time around Liv Tyler plays the love interest, Betty Ross. She and Norton have great chemistry and their relation works much better than the previous Hulk film. It’s clear too that the aim was to be closer in nature to the T.V. show as well. When General Ross discovers where Banner is, he enlists the help of power hungry soldier Emil Blonsky (Tim Roth). After Blonsky learns what Banner can become, he wants whatever Banner has that makes him that way. He and general Ross concoct a plan for Blonsky to help bring Banner down.

Before the film’s release, much was made about director Louis Leterrier and star Edward Norton clashing with the studio over the final cut of the film. It was rumored that some 70 minutes of footage was cut out (more on that in the special features section). Apparently the studio wanted something leaner and less than two hours as well as more emphasis on action. Leterrier and Norton, however wanted more focus on character and story. Norton also refused to promote the film and traveled to Africa during the film’s release as opposed to supporting the film. The final film doesn’t suffer for it though. We get more than enough character development, a strong love interest between the two leads, and even a good villain. This is indeed the second film (after Iron Man) to fit into the Marvel universe. All of these lead to The Avengers. Marc Ruffalo (An Inferior choice) replaced Norton in this film. Norton was originally set to reprise his role for The Avengers, but talks broke down. Norton had a better handle on the character. He was calmer and contained, whereas Ruffalo seemed more on edge the whole time. So, while this film does fall into the Marvel continuity, it also acts of something as a standalone film as well. It’s a fun ride from beginning to end and should please superhero fans.

The Incredible Hulk smashes its way onto the 4K format sporting a 2.39:1 HEVC 4K transfer. This is certainly a visually stunning film. It may not have as strong visuals as Thor, but that’s not a bad thing. This film is a different kind of beast (no pun intended). The hulk looks surprisingly lifelike. The ripples in his physique are well defined and the strands on his head are loose and flow. You can make out traces of dirt and grim on him in several of his scenes. Colors are also accurate and well defined. The sequence at the bottling plant earlier in the film is also a strong showcase for purists. There really is nothing negative to say here.

The previously-released DTS HD Master Audio has been replaced by a DTS X mix that, well, rocks. This is also a disc you would use to show off your set up. As the bullets bounce off the Hulk’s back in an early scene, we can hear every detail, every drop of glass. The dialogue also comes across crystal clear. Norton and Tyler are both fairly soft-spoken actors, but their lines are still very clear and easy to understand. The climax also makes good use of the rear channels. If you live in an apartment, you might want to make sure to not wake the neighbors.

It’s clear that this has been released on 4K to try and double dip as much as necessary. That’s fine. But we don’t get any new features here, they’re the same that appeared on the Blu-ray.

Released just a month after Iron Man, these two films started off the Marvel Cinematic Universe. It’s hard to believe that a decade later it would be one of the highest-grossing movie franchise of all-time. Norton’s presence is missed in the later films, for sure and Hulk is one of the character’s that’s in dire need of another solo film. Still, many feel that this version is far superior to the 2003 Ang Lee version and it’s nice to have in 4K nonetheless.