On October 5, 2005 author Stephenie Meyer published the book Twilight.  Looking back over the past eight years, we know what happened with that book and that series.  We’ve got young teen love, vampires, werewolves and a whole lotta angst to go around.  Twilight was, of course, the first of the four books and New Moon, Eclipse and Breaking Dawn followed.  This paved the way for a Harry Potter-esque series of films that have now been completed and the movie studios are like literal sharks in a tank waiting to make anything else Meyer publishes into a film.  As it so happened, she also penned a little novel entitled The Host in which an alien race invades Earth and takes over the race.  In truth, I never read The Host nor did I finish the Twilight series (though I did read two of the four novels).  And I will give credit where its due in that Stephenie Meyer is a very talented author.  She’s no J.K. Rowling, but to have five of your books made into six films in eight years is quite an accomplishment.  Enough of the history, let’s dive in and see if The Host is worth watching.

Earth has been invaded by an alien presence that has the odd habit of, well, taking over the bodies of the inhabitants.  This isn’t all together a bad thing as humans are now resistant to disease, a new era of peace has emerged and if you look at it on the surface – all is well.  Well, all is not well especially when aliens and angsty-teens are involved.  We meet Melanie (Saorise Ronan), who has been one of the “infected” but her personality is resistant to being taken over.  As such we get a full dialogue and yet more insight into the mind of a teenage girl.  The “souls” (the invaders) have taken over the Earth and all look like supermodels.  They drive chrome-dipped cars, wear white and have the most beautiful eyes you’ve ever seen.  The search the galaxy (universe?) taking over inferior life forms.  Of course, the movie wouldn’t be complete without not one, but two male leads (giving us that “love triangle” that worked so well in the Twilight films) in the forms of Jared (Max Irons) and Ian (Jake Abel).  Truthfully I’ve said enough.

Having never read the novel, I had no idea what to expect.  Well, let me recant that – I had an idea as to what to expect since I’d actually seen all of the Twilight films.  I’d assumed that Stephenie Meyer had a little more range, but evidently something got lost either from her pen to her book or her book to the film.  Whatever the result, this movie is just a hot mess.  I’m a bit surprised too, since director this type of film would seem to be right up director Andrew Niccol’s alley.  Niccol had helmed one of my personal favorites, Gattaca, as well as S1m0ne and In Time.  But evidently he wasn’t firing on all cylinders here. The rather young cast does what they can with their roles and I found it hard not to be totally annoyed by Soarise Ronan’s role here. I actually enjoyed her in The Lovely Bones, so I credit the role and not the actor.  Just…skip this one all together.  If you want to watch The Host, watch the 2006 Korean one that has absolutely nothing to do with this film.  Or if you’re really into the whole body snatchers thing, watch Invasion of the Body Snatchers.

In spite of what’s actually happening on the screen, I do have to admit that The Host does look pretty amazing on Blu-ray.  The 2.40:1 AVC HD image is top notch in almost every single way, shape and form (sorry, I couldn’t resist).  Niccol’s films have a very clean and sterile look about them, it’s like the entire movie set is a giant Apple store of something.  Detail is amazing, we see the perfection in the actors’ wardrobes, the uber-cool cars and even their “jellyfish-like” real form.  Colors are warm and vibrant, showcasing nearly every color in the spectrum. Contrast is rock solid and I saw no evidence of DNR.  Sadly, this looks downright amazing.

The included DTS HD Master Audio soundtrack is nothing to balk at, no matter how much I wanted to.  Dialogue is crisp and razor sharp, the LFE are randomly highly-involved and surrounds are ever so active.  We hear Melanie’s constant internal dialogue with the utmost clarity and had I not been so annoyed that I was passing up a sunny day outside, I might have paid a bit more attention to what she was saying.  Like the video, the audio certainly does deliver and it’s a testament to the quality that Universal’s putting out on their discs.

Included in this Blu-ray release is an audio commentary with author Stephenie Meyer, director Andrew Niccol and Producer Nick Wechsler as they join forces to give us a pretty dull and lifeless track.  I’ll come out and say that I only listened to the first 45 minutes or so, but I just couldn’t bring myself to waste any more time on this film.  Also included are some deleted scenes, the typical EPK “Bringing The Host to life” which focuses on Meyer and how the film came to the screen as well as a PSA from “The Seeker.”  There’s also a DVD and an UltraViolet copy should you wish to pollute your other devices with this film. 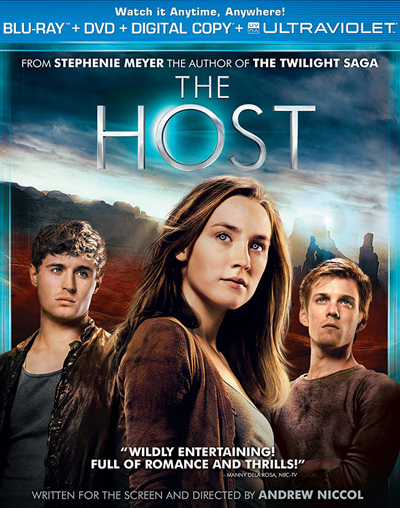