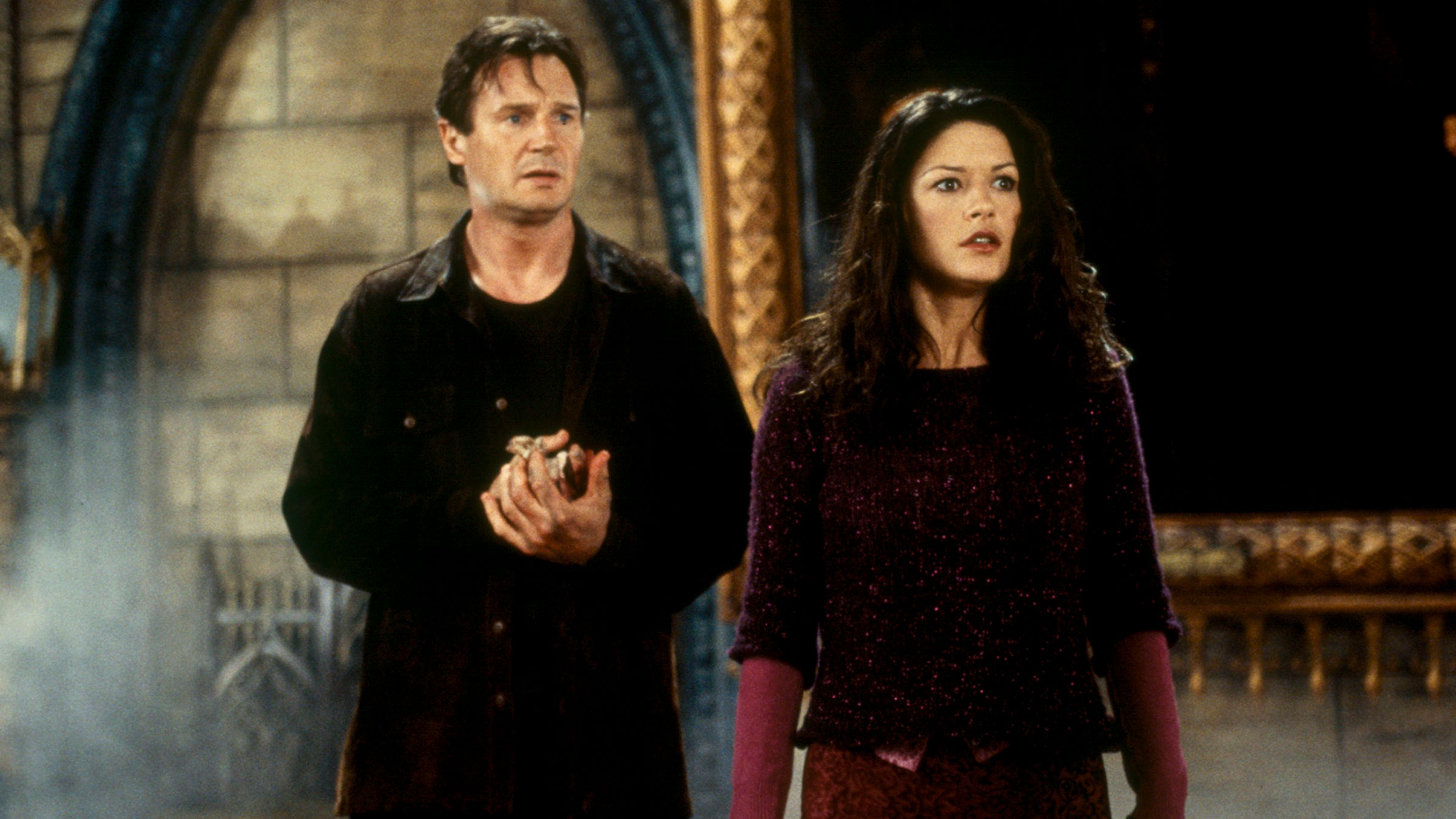 Dr. David Marrow (Liam Neeson) has arranged for a research experiment to be done in which he will study the effects of fear, but his subjects don’t know that. Marrow has drawn his trio of test subjects into the experiment under the guise of a different research experiment, one that deals with sleeping disorders. This experiment will take place in Hill House which is a huge and ornate mansion that harbors some scary stories and a checkered past. Marrow plans to use the history of the house in order to set the stage for his study on fear, but he has no idea what lies in store. The subjects arrive and we meet Theo (Catherine Zeta-Jones) a rich and spoiled sex kitten, Luke (Owen Wilson) a questioning and intelligent experiment veteran, and Nell (Lili Taylor) a strong young woman who just lost her mother. As the hours pass and the night comes, strange things begin to happen within the house and no one is sure what to think. The house almost seems to come to life at times and Nell appears to be center of the house’s attentions. Are the happenings all part of Marrow’s plans or has this group wandered right into an actual haunted house?

This movie was dismissed by many as a shallow and disappointing film, but I have to disagree with the masses on this issue. While I do feel the characters are on the thin side in terms of development and the film does fall short of fulfilling the potential power of the storyline, this movie never fails to entertain me and that is enough to keep me happy. The film has humor and some scares to be sure, but the true stars of this film are the visuals and production design. This movie is simply gorgeous in every respect, the sets are phenomenal and make you feel right in the middle of a real life haunted house. The attention to detail is amazing and there is never a shortage of dazzling visuals to keep your eyes busy. The special effects are also quite good and add much to the tone and mood of the film and the house in which it takes place. This film has a nice ensemble cast to be sure and while they might not be the deepest characters out there, I find them to be very entertaining. If you want a visceral and terrifying film then look elsewhere, but if you want a fun and visually stunning movie then make sure you check this one out.

This film was directed by Jan De Bont, who seems to have a firm grip on delivering top notch popcorn flicks. While De Bont’s movies don’t focus on storyline complexity or deep characters, they do offer a lot to fans of popcorn type movies, or those which focus on entertainment and sacrifice other elements. In other words, snooty film buffs will badmouth Jan but I’ll bet even money those same cards watch Speed on their home theaters. This movie had the potential to be a fantastic film with a strong storyline and such, but it turns out to be little more than escapist fun. I like to watch the movie so I won’t complain, but don’t expect Shakespeare or Citizen Kane on this one. If you want to see more of De Bont’s movies I recommend Speed and Twister. The cast of this film does a fine ensemble performance and I feel bring the characters to life well. Liam Neeson (Rob Roy, Schindler’s List) seems out of place from time to time, but gives his usual solid effort. Lili Taylor (Ransom, Pecker) seems to be the center of the cast and she does a superb turn in this film. I look forward to seeing her in more leading roles in the future. The supporting cast includes Owen Wilson (The Minus Man, Shanghai Noon), Bruce Dern (The ‘Burbs), Virginia Madsen (The Hot Spot, The Florentine), and the ever popular Catherine Zeta-Jones (Entrapment, The Mask of Zorro).

It’s been over two decades since this movie first hit the DVD format, so it was due for a little refresher. Paramount’s new line of Blu-ray’s has really breathed new life into some of their titles and this is no exception. The transfer features flawless color replication and if you need instant proof venture to the scenes in the red room, where the reddish hues sparkle and never bleed in the least. The other shades look just as bright and correct though and flesh tones appear natural and consistent also. The contrast is excellent as well, shadow always retain detail well but never reveal too much. The wide 2.39:1 AVC HD image is a marked improvement over the previous versions and it shows, in the most literal sense.

I distinctly remember there being a DTS version of this and a regular Dolby Digital 5.1 when the DVD first came out. Thankfully technology has advanced to the point where such things no longer exist. What we have here is a Dolby TrueHD version that sounds better than either of the aforementioned sound mixes. And I’d forgotten how good this movie sounded! It’s amazing what some LFE and well-placed surround sounds can really to do heighten the mood of a film. Vocals are clear and crisp, the bass (in some scenes) is thumpin’ and it all makes for an amazing-sounding film.

The supplements from the previous version are recycled here, though there is one new supplement.

This wasn’t a highly-regarded film at the time and the last twenty years haven’t done much to improve upon it. But horror is in and if you can check your brain at the door, you’ll have a good time. Paramount’s new Blu-ray both looks and sounds better and the addition of a new, albeit brief, feature only adds to the allure.