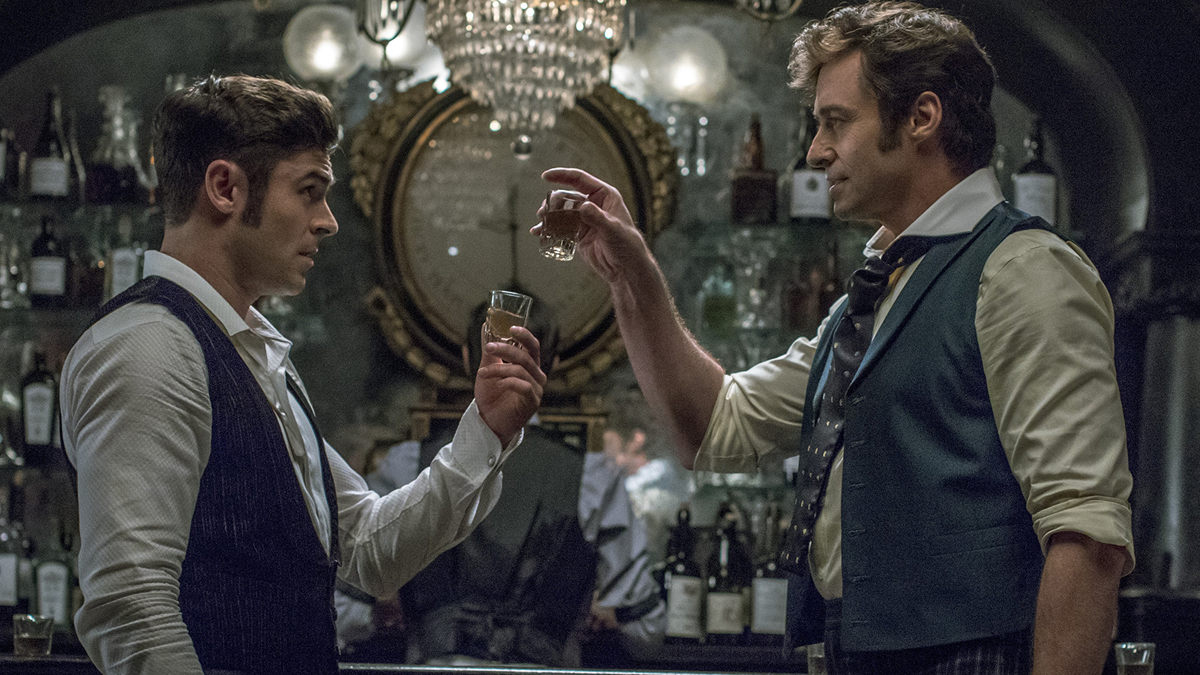 Musicals have been around nearly as long as movies themselves. In the golden age of Hollywood, entertainers often had to be “triple threats” in that they needed to be able to sing, dance and act. That’s a trait not shared by today’s stars, though there are a fair share who possess all three (Hugh Jackman being one of them). And while the life and times of P.T. Barnum might not be the most obvious choice for a movie musical, it shows that in the right hands that anything can be entertaining. While not historically accurate, The Greatest Showman is a lot like the life of Barnum – you get pay your money, you’re entertained and you leave. There’s no deeper meaning to it. It’s show-business. Those looking for something a bit more, well, factual need look somewhere else. I’m sure there’s got to be a documentary on Barnum out there somewhere, but this isn’t it.

Jackman plays P.T. Barnum, the son of a tailor who never had a dime to his name. Determined to make something of himself, he manages to court the well-monied Charity (Michelle Williams) who’s lived the life of luxury. Barnum opens a Manhattan museum dedicated to oddities. It flops. However, one of his daughters gives him an idea: fill the museum with living things and it might be more successful. He puts out a call and soon we find a bearded woman (Keala Settle), a dwarf (Sam Humphrey), a tattooed man (Shannon Holtzapffel) and a trapeze artist (Zendaya). It’s a hit and it brings him riches, but he’s been labeled for “fake” oddities and he wants to find genuine talent. It’s then that he enlists a Swedish singer, Jenny Lind (Rebecca Ferguson) that gives his show some much needed authenticity.

And that’s it. That’s basically it. This isn’t a biopic on how Barnum rose to become one of the 19th century’s leading entertainers and it does touch on his partnership with “Bailey”, though it’s in the form of Phillip Carlyle (Zac Efron). If you’ve been clamoring for Efron to belt out tunes like he did in the High School Musical films, well your wait is over. The Greatest Showman embraces what it set out to be – a movie musical that’s entertaining, but not really factually accurate. I can see someone sitting down watching this and Moulin Rouge! as a double feature. Hell if I’m under the weather, that someone might just be me. This is Jackman’s show, though there are some great supporting performances – mainly from Williams, Efron and Zendaya. It’s a feel good film that’s sure to please, but won’t (and didn’t) win any awards.

Fox’s Ultra HD presentation of this film is simply a thing of beauty. The HDR gives a bit more color depth to some of the interior shots, namely the pink outfits worn by the trapeze artists as well as the general ambiance of the stage. Contras and black levels are spot on and the detail is simply stunning. Jackman played Barnum from the age of 20 to perhaps in his 50’s (again, the movie never really says) but the texture in his hair, outfits and skin is so razor sharp that I was dumbfounded. The 2.39:1 HEVC 4K transfer leaves nothing to the imagination. Fox is consistently putting out some of the best-looking 4K titles and this one is no exception.

A very robust Dolby Atmos track serves the purpose of setting the stage and mood for the film. This is a musical in every sense of the word and each and every song sounds as if it’s being performed live. Bear in mind that the musical team behind this was also a big part of La La Land, so there are some obvious parallels drawn here. The thump and the bass really set the mood for the toe-tappin’ musical experience that the viewer experiences. It’s really quite a treat.

The audio commentary and the text-based supplements (Music Machine and Sing Along) are present on the Ultra HD disc, while the other supplements are all part of the Blu-ray offering.

You either like musicals or you don’t. I do. They’ve been around since the inception of the format itself with Broadway Melodies, Singin’ in the Rain, The Sound of Music and Chicago just to name a few. The Greatest Showman is a lot like its subject matter – a nondescript, entertaining movie that’s sure to please folks and leave them in a good mood. It’s not overly deep and I’m sure many facts were left out. Fox’s presentation is outstanding in the technical merits with reference sound and video presentations. There’s enough supplemental material to warrant a purchase, too.