The Girl with the Dragon Tattoo (Blu-ray)

Unless you’ve been in a cave (or missing) the last several years, then you’ve undoubtedly heard of Stieg Larsson’s series of books. These consist of The Girl with the Dragon Tattoo, The Girl who Played with Fire and The Girl who Kicked the Hornet’s Nest (reportedly there’s a fourth book, but Larsson’s girlfriend is holding it until the money is correct). And, for those who didn’t know, Larsson died of a heart attack back in 2004 so that makes this series of books/films even more potent. You might also be aware that these films have already been adapted into a film trilogy, but us Americans always have to do things our own way. So with that said, director David Fincher (Se7en, Fight Club and The Social Network) now has the daunting task of crafting these films to not only mirror the books, but he’s already got films to compete against as well. Then again Fincher has always been up for a challenge. For those that haven’t read the books (I’ve read the first one) or seen the European versions of the films, this is an introduction to the characters and what will be a trilogy of films. To those that are already familiar with the characters, this is your chance to do a comparison between the different versions. At nearly three hours long, there’s a lot of material to cover so let’s get started.

Mikael Blomkvist (Daniel Craig) is the owner of an independent magazine – Millenium. He’s just been convicted of libel against a billionaire industrialist. Taking a leave of absence, he’s recruited by Henrik Vanger (Christopher Plummer), a former CEO and still powerful member of society. Henrik has been obsessed by the disappearance of his niece for some four decades and wants to enlist the help of Mikael to see if he can uncover any new leads. It’s somewhat of a joke to Mikael, but he takes the job. As he starts digging, he learns things about the close-knit Vanger family that aren’t readily available to the public. As he starts to dig deeper, he meets (and later employs) the help of Lisbeth Salander (Rooney Mara in an Oscar-nominated performance), the rough-around-the-edges researcher. Lisbeth has her own demons, but is arguably the best at what she does. As new material is discovered, it reveals somet things about the Vanger family that clearly weren’t meant to be seen. Both Mikael and Lisbeth are now in a fight for their lives and must also try to find out the truth – about everything.

Admittedly, taking a 160 minute movie and condensing it to one paragraph doesn’t do justice to this movie. David Fincher’s adaptation of the novel is just different enough from the European version so that any direct comparisons shouldn’t be made, but we all know that they will be. I really can’t think of any other director that could do the subject matter justice aside from Fincher. And there is dark material here. There are a couple of rape scenes, some very graphic violence and let’s just say that not even animals are immune to the violence. Craig’s rather robotic performance works well here and as I mentioned, Mara’s turn as Lisbeth merited her an Oscar nod (she lost to Meryl Streep in The Iron Lady). If you like your films dark and you like David Fincher’s films then this should be right up your alley. The good news is that we’ll have the latter two installments, though it might be a few years before they see the light of day. Let it be said that this film isn’t for everyone and the weak-hearted might want to look elsewhere for some entertainment.

Fincher’s films are primarily known for their physically darker presence and The Girl with the Dragon Tattoo is certainly no exception. The 2.40:1 AVC HD image is near flawless and if it’s dark you’re looking for, then this is your movie. Fine detail is amazing throughout and though some might be put off with the intentionally dark scenes, it’s fitting to keep the tone of the movie consistent. Shadows, black levels and contrast are all flawless here with the indoor lighting looking as natural as can be. The outdoor scenes seem to showcase a more gritty, corporate grayish hue (think Traffic) which is, again, fitting. For a film this long and occupying most of the real estate on the Blu-ray, it looks amazing and just short of perfection.

Again, Fincer is no fool as he re-teams with last year’s Oscar-winner Trent Reznor (he won for The Social Network) as they collaborate on another unique score. There aren’t a lot of slam bang effects that will rock your system, rather much like The Social Network the score is more organic with subtle effects sprinkled throughout. Dialogue is a bit on the softer side, but it’s of no fault of this DTS HD Master Audio mix. There are a few scenes which resonate with LFE and give the movie a much needed jolt (pardon the pun as one of those scenes involves, well, a stun gun) but on the whole it’s a very solid mix.

This three disc set is heavy on the extras, but you’ll need to pony up for the Blu-ray version to really get the whole experience. That’s ok because I assume anyone reading blurayauthorty.wpengine.com is interested in the Blu-ray version, right? The first disc contains an audio commentary with director David Fincher. For anyone whose listened to one of his tracks, this is more of the same. Fincher is very forthright, technical and in-depth with his commentaries. Surprisingly there aren’t many lulls in the track which makes for a very interesting listen. Moving onto the second disc and the Blu-ray exclusives, we find the lion’s share of the supplements. We start off with “Men Who Hate Women”, the literal title translation and we get some interviews with the cast and crew as they explain their interest in Larsson’s novels and the lead – Lisbeth. “Characters” is actually broken out into three other sections focuses on the main three characters in the novel: Lisbeth Salander, Mikael Blomkvist and Martin Vanger. We learn about how the actors were cast, their physical look and feel and how the individual actors chose to play their respective parts. The next segment is aptly-titled “On Location” in which we get a few featurettes showing the various shooting locales and a pseudo deleted scene entitled “F**K These People.” Nice. “Post Production” is just that, the individual segments that led to the physical look and feel of the movie as well as some alternate takes on the main title sequence. Personally I liked the way Fincher did the opening titles for Panic Room, but that’s just me. Finally we end up with “Promotion” which contains some trailers and some publicity materials. 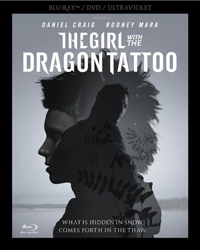