The Girl in the Spider’s Web (Blu-ray)

The Girl With…series has a sordid history when it comes to the film adaptations. The late author, Steig Larsson, who died of a heart attack in 2004, created the original trilogy of books. These became best-sellers worldwide and we all know the names: The Girl With the Dragon Tattoo, The Girl Who Played with Fire and The Girl Who Kicked the Hornet’s Nest. These have already been made into films starring Noomi Rapace back in 2009. And as we all know, David Fincher did a reboot of sorts in 2011 with Roomy Mara and Daniel Craig in the title roles. Evidently it wasn’t enough of a hit to warrant parts two and three, so instead we flash forward 7 years and go with The Girl in the Spider’s Web. This is a sequel, but wasn’t written by Larsson. Confused yet? Yeah, me too. Let’s get started.

Lisbeth Salander (Claire Foy) is perhaps the most dangerous computer hacker. And not necessarily for her skills on the keyboard. In her free time she exacts revenge on cheating husbands, much to their chagrin. Still, when asked to perform an impossible challenge, she simply can’t resist. An Ex-NSA employee, Frans Balder (Stephen Merchant) has created a computer program which can hack any nuclear weapon on the planet. Unfortunately for him, he realized this too late and now the proverbial cat is out of the bag. He hires Salander to get his program back, but no sooner does she accept the job than she’s public enemy number one. But he mission, which she’s already chosen to accept, is to get the program (code named “Firefall”) and save Balder from a group called “The Spiders.” Add to this that this somehow all ties back into Salander’s past as we were teased with a prologue of Lisbeth and her sister.

I did read The Girl with the Dragon Tattoo about a decade ago. I liked it. I have not seen the films starring Noomi Rapace. I’ve heard they’re excellent. And I did see and liked The Girl with the Dragon Tattoo when it came out on disc. That aside, I just felt that this movie felt out of place. It doesn’t have its place within the first three novels and I’ve heard that Larsson’s family has been squabbling over his fortune for some time. How nice. Couple that that Roomy Mara (who was Oscar-nominated for her role as Lisbeth) and Daniel Craig have now been replaced with Claire Foy and Sverrir Gudnason. So if you have to wonder why they keep showing him, he’s playing Mikael. Truthfully, this felt more like a Jason Bourne or James Bond movie than a Girl With…film. It just didn’t click with me. Or audiences.

When it comes to new films on disc, there’s really no studio that puts out better-looking transfers than our friends at Sony. And it seems they know it. The Girl in the Spider’s Web looks simply marvelous as I perused it on my 4K TV. Granted this was the Blu-ray, but lack of HDR aside it dazzles. The desolate landscape of Europe looks glum, grey and snowy. Just as it was supposed to be. Claire Foy’s raven-clad hairstyle clashes ever so with her porcelain-colored skin. It’s quite the contrast. The little nuances also make a statement, giving us just the right amount of detail. Say what you will about the film’s content, but the film looks divine.

I have no idea if a 4K version exists, but the Blu-ray sports a very robust DTS HD Master Audio mix that was music to my ears. It’s got explosions, gunfire, car chases and a neat little motorcycle chase across the ice. James Bond would be envious! Euro accents aside, the vocals sound pitch perfect and the front stage lends its efforts to help round out a nice mix. Surrounds are not forgotten as they offer up a bevy of sound to balance everything out. No complaints here. It rocks.

There’s no denying that Lisbeth Salander is an intriguing character, but I don’t know if too much time has passed between the last installment and this one. Will Claire Foy be the new face of Lisbeth or will she be another face that plays her (like Batman)? Nevertheless, this series has legions of fans and for those that have bee patiently waiting, here you go. 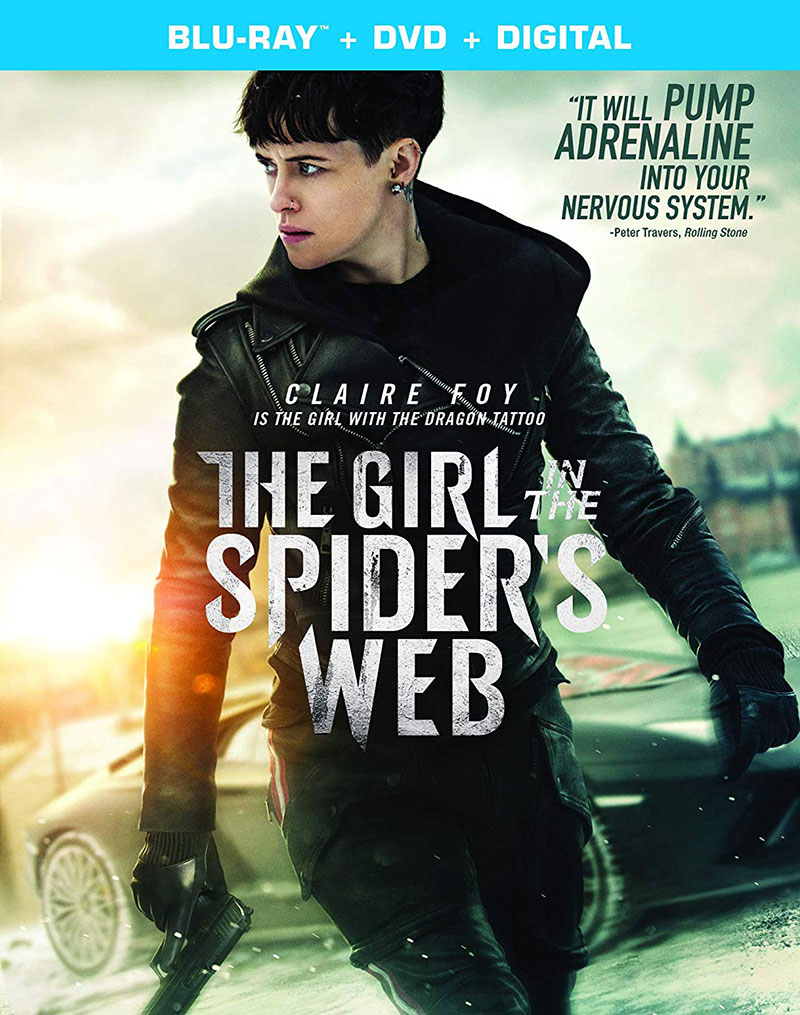