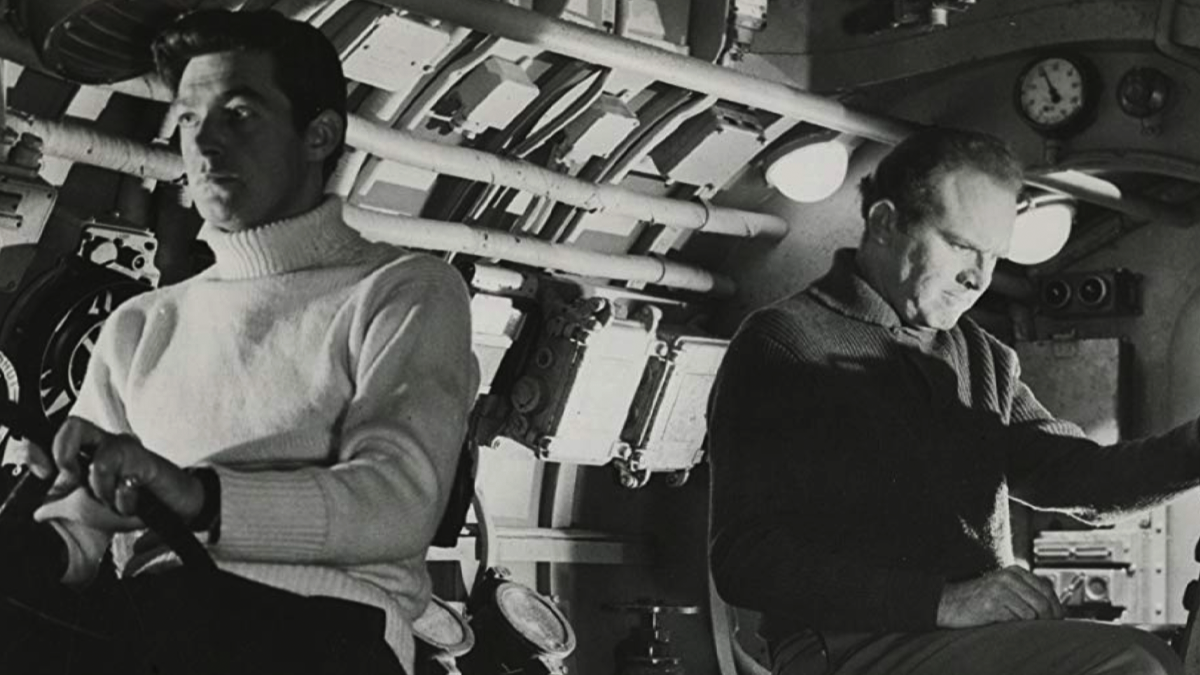 Warner Archive continues to focus their attention on science-fiction films from yesteryear with Eugene Lourié’s film The Giant Behemoth. This is a creature feature in the same vein as a Godzilla film. Eugene Lourié was best known for another creature feature – The Beast from 20,000 Fathoms. Receiving the film, I decided to see how my kids and I would enjoy it.

The film begins with marine biologist Dr. Steve Karnes discussing a radioactive chain reaction at a conference about Atomic issues. This is the only really good science in the film, as Karnes discusses how some fish exhibited radiation but the animal that fed on the fish showed even more radiation and how the radiation accumulated in bigger animals. On the coast of England near Essex, Jean’s father is attacked by a radioactive sea monster, but she thinks he is just out getting drunk. She goes into town and he is nowhere to be found. Enlisting her friend John from the local pub, they look on the shoreline. They find him on the beach severely affected from radiation. He says he was attacked by a “behemoth,” and then he dies. After the funeral, Jean and John walk the seaside and encounter a large amount of dead fish washed up on the beach. John sees something and touches it, not realizing it is full of radiation. In London, hearing a report of the dead fish and a possible sea monster, Steve Karnes meets with his professor. They formulate a plan to visit the town and find out what is going on. They meet with John and Jean. John shows them his hand that was affected negatively by the radiation from the “stuff” he touched. After some tests reveal high radioactivity in some fish, they decide to see if they can find the sea monster. Soon London will need to defend itself from a large sea monster – a radiated paleosaurus- that can issue radioactive waves from itself.

This is a fun and fast creature movie. Like most of the creature films from that time, it is impossible to take it seriously. Part of the fun is how seriously the actors take their roles in service of something so implausible. Inside these movies lurks the true fear that generation was carrying around – radiation and nuclear war. The film does use some stock footage of nuclear tests and the footage is frightening. The film also uses some stock footage from the bombings of London from the Germans in World War II. The world had just survived an incredible loss of life and numerous atrocities just slightly over a decade earlier and creature films were one way to help everyone take their mind off of the possibility of being destroyed by an atom bomb.

This creature feature is enjoyable but not extremely memorable unless you may have watched it in your youth. The stop motion animation techniques are still fun to watch now and the black and white cinematography still looks pretty good. The acting is well-suited to the film but I can not remember any of the actor’s names offhand. Overall, this is another fun release from the Warner Archive that will satisfy all the science fiction fans that like to harken back to the atomic age.

Warner have done an excellent job on the restoration in 1080p in 1.78:1 aspect ratio. Black and white films when done correctly look gorgeous on Blu-ray And Warner shows here why they are some of the best in the business. The picture here is clear and fine detail is excellent. There is some softness that occasionally creeps into the picture, but these occasions are so rare that it would be ridiculous to complain. Fans of the film should be ecstatic to see such a small release get such a great transfer.

Warner have provided a DTS-HD MA 2.0 track. The dialogue is clear and they have done an excellent job removing any hiss. The thunderous score by Edwin Astley sounds good on this track. This is not a particularly immersive track, but they have done a solid job on the mixing. Fans will be pleased.

The Giant Behemoth is a fun, if slightly forgettable, creature feature from the atomic age. It helps the time go by quickly enough and gave me more than a few good laughs on a Saturday morning with my kids.  Fans of classic sci-fi and stop motion animation will enjoy this film and the beautiful transfer that Warner has provided.