“Senator – have you ever committed adultery?”

Jason Reitman tends to choose projects that spark my interest. His first film Thank You For Smoking remains a favorite, and I have enjoyed his films Juno, Up in the Air, and Young Adult. When I saw that he had chosen to film an adaptation of the book All The Truth Is Out: The Week Politics Went Tabloid by political journalist Matt Bai, I was intrigued enough that I read the book before seeing the film. The book ended up being one of my favorites that I read last year, so I eagerly looked forward to seeing the film.

The film begins in 1984. Gary Hart has just finished second to Walter Mondale in the Democratic primaries in the Iowa Caucus. Mondale had just taken him down by comparing Hart’s ads to the Wendy’s ads that said, “Where’s the beef?” In his hotel room, Hart (Hugh Jackman) is told to head back to Washington by his wife, Lee Hart (Vera Farmiga.) Four year later, while the Tammy Faye Bakker and Jim Bakker scandal plays out in the news, Gary Hart enters the presidential race with an overwhelming lead over every other candidate. In Hart’s campaign base of Denver, Colorado, Hart’s campaign deals with Hart’s insistence that he announce in front of Red Rocks. This is to the chagrin of his staff and against the tradition of announcing in nice well-lit halls and convention centers. Hart thought that this would help him stand out to the other people from the mid-West. Hart had at one point lived on the couch of Washington Post reporter Bob Woodward and was a well-known philanderer. It was common knowledge that he cheated on his wife while living separately in D.C. At this point in time, reporters had a tacit understanding that certain subjects were not newsworthy. Over the next few weeks, all of that would change. Gary Hart was a non-traditional politician who consistently shied away from putting his personal life into the campaign. His campaign was about ideas – not about eating BBQ in front of camera crews. Needing a break from the campaign trail, Hart goes to Miami with a friend and campaign adviser named Billy Broadhurst (Toby Huss.) Boarding a boat named Monkey Business set to sail to Bimini, Hart meets a young model named Donna Rice (Sara Paxton.) The series of events that followed would forever alter the landscape of political journalism and destroy Hart’s political career and ambitions. Middling Miami Herald reporter Tom Fiedler (Steve Zissis) receives a phone call that Hart is having an affair with Rice and they also offer to sell a photo. Meanwhile, across the country reporter A.J. Parker (Mamoudou Athie) asks Hart about his separation from his wife earlier in their marriage and whether Hart feels like his marriage was traditional. In response, Hart replies,”follow me around. Put a tail on me. You’ll be very bored.” The combination of these two events creates a perfect storm for Hart and Rice; embroiling them in a scandal that will alter their public lives.

The book’s main goal was not to decide whether or not Hart cheated on his wife with Rice, and the film, like the book, does not try to answer that question. The point of the book was to convey how the story changed the media landscape. The public decided that Gary Hart was guilty based on the evidence they received. The press forgot whether or not this story was actually newsworthy. Out of fear that they would lose out on a big story to the other newspapers, they all followed the story. Donna Rice found herself in the limelight and it followed her throughout life. Gary Hart’s name became THE name associated with adultery. Before Gary Hart and Donna Rice, the press had an understanding that there was no reason to publicly crucify officials simply for adultery. Gary Hart attempted to run a campaign that stood on its ideas. When his campaign became about himself and personal matters, he no longer felt the urge to put his family through the ordeal.

The other question in the book that the film asked was: Why did Gary Hart make the decisions that he did? Why would a political candidate running for President hop on a boat to Bimini with some women that were not his wife? These answers never quite become clear and are only known to Gary Hart himself. It is a question posed without an answer. The word that comes to my mind is hubris, but I think it is a question that the viewer will need to answer himself.

The screenplay is capably written by Jay Carson, Jason Reitman, and Matt Bai adapting from his own book. The only parts of the film’s writing that feel forced are the interactions between Hart and his wife. That is probably because these conversations were made privately and not publicly. They are the only conversations in the film that do not have the ring of truth to them, simply because their private nature kept the public at bay at what they spoke about. What transpires in the film can only be considered conjecture in those moments. What we do know is that the Harts did not divorce and are still together. Whatever transpired between them managed to save their marriage despite the maelstrom they were in.

The film has an Altman-esque quality at the beginning and also an Aaron Sorkin quality for the duration. I loved the way that the film blended all the tiny conversations that dealt with the political climate; showing conversations from the staff while the  televisions feature Tom Brokaw and others ruminating on the presidential race. The film recreates the smoke-drenched big hair and neon Eighties perfectly, with a soundtrack that includes “Head Over Heels” by Tears for Fears, and “Foreplay/ Long Time” by Boston. The film definitely will take you to that place in time and it manages to feel immediate. It’s well done.

Hugh Jackman is fantastic in the lead role. He is utterly believable. J.K. Simmons, Alfred Molina, Bill Burr, Mamoudou Athie, Kevin Pollack, and Toby Huss round out a solid ensemble cast. This film was a big undertaking to cast so many of the political aides and reporters in an accurate way, but the casting seemed appropriate.

The only downside to the film is that there are a scene or two that could have been excised to keep the momentum. There is a little too much pontificating (a scene with J.K. Simmons comes to mind that could have been dropped completely.) This is a pretty small complaint for a film that so well encapsulates a shift in the nation’s political climate. Jason Reitman directs the film with a steady hand and gets his points across in the running time. This is a good story of how our journalism shifted towards courting controversy.

It’s nice to see a film that fills most of the entire screen. Back in the early days of DVD, I wanted the movies as wide as they could go, but I now find that watching in a 1.78:1 or 1.85:1 aspect ratio are more favorable. And that really means nothing, but I found it worth noting. That said, Sony’s 1.85:1 AVC HD image is consistent with the high standard that studio has set over the years. The movie takes place just over three decades ago, so some of the dated outfits and hairstyles are a bit amusing to look at. Still, the clarity and definition supplied by the Blu-ray are a welcome treat as this looks the part. Colors are spot on, detail is immaculate and I found nothing that might detract from what was a very fine-looking transfer.

The aforementioned “Altman-esque” quality of this film applies mainly to its dialogue. Altman, as we know, was famous for the overlapping dialogue that represents the way we all speak, but the articulation isn’t tailor made for film. Still, the included DTS HD Master Audio soundtrack manages to find a nice balance between the spoken word, surround ambiance and the front channels. This isn’t a movie to demo your system with, but I found it a very realistic type of film that best replicates what being in the midst of a Presidential race must feel like.

The Front Runner is great. While the pacing of the film suffers from one or two too many scenes of characters conversing, the film does an excellent job of laying out the points from the excellent book on which it was based. With a strong script and a stirring performance by Hugh Jackman, this is a thinking man’s film. Political junkies like myself will enjoy it. 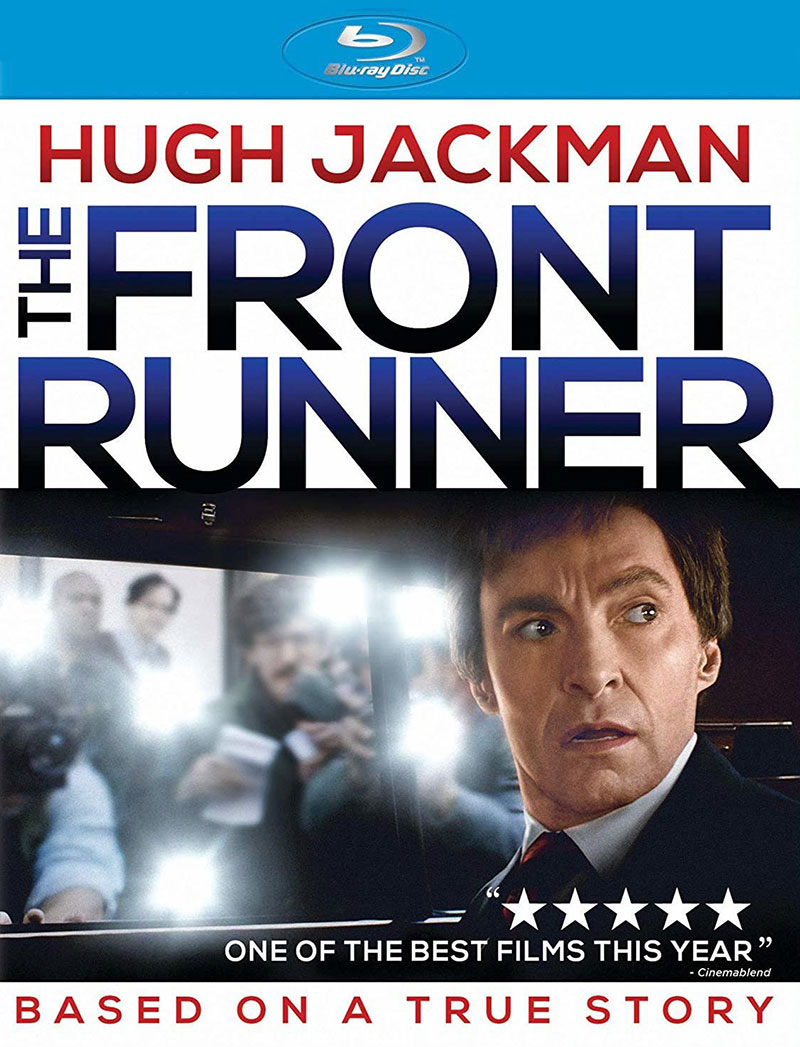