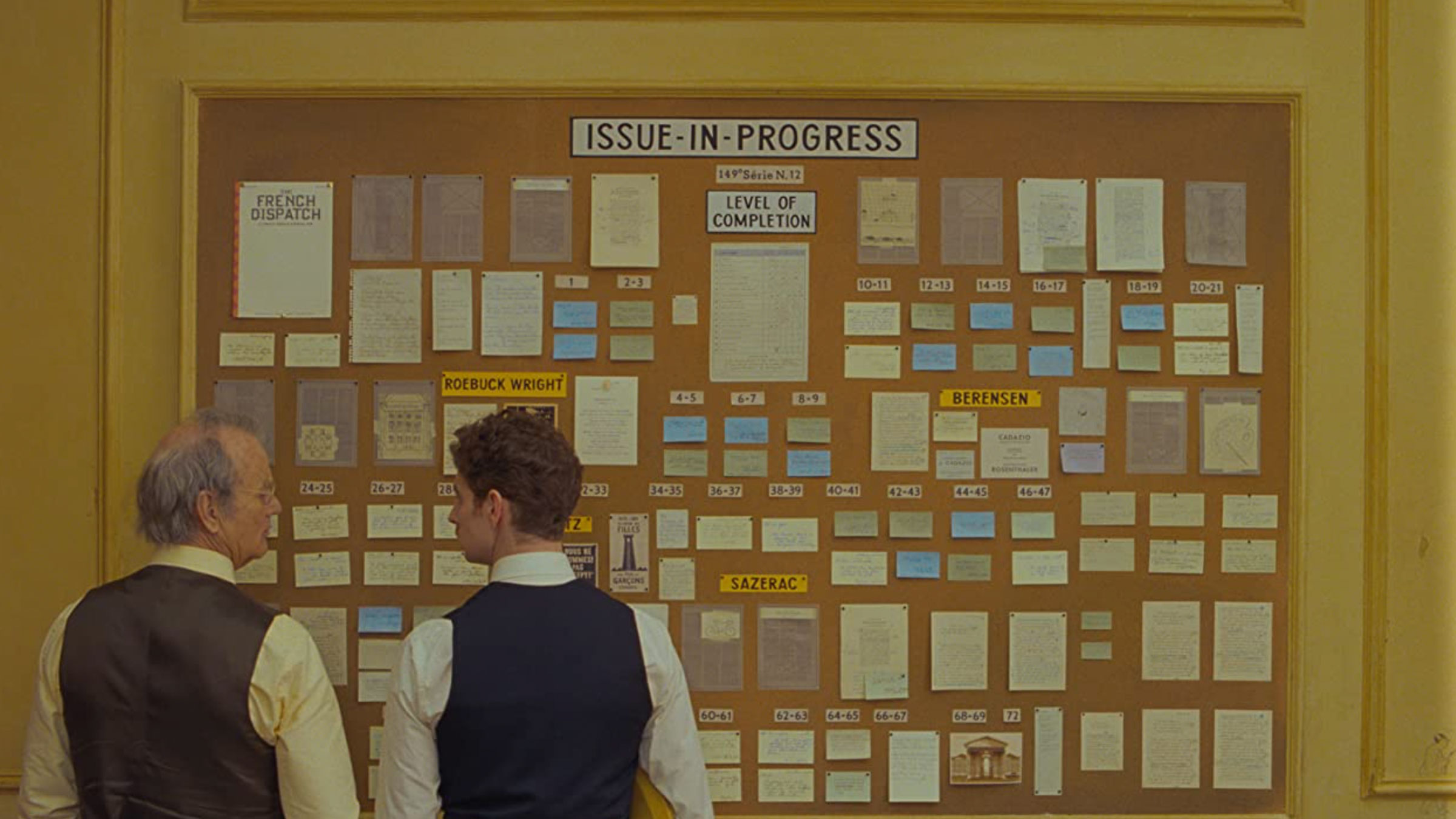 I’m sure that I’ve mentioned this in one of my other reviews of Wes Anderson films, but I don’t have it in me to dive through the reviews and cite which one. I’ll just say that my mother and I were channel surfing in…we’ll call it 1997 and came across a film that sparked our interest. As it turns out, that movie was Bottle Rocket and introduced us to the world of Wes Anderson (and it also gave us Owen and Luke Wilson). I was an instant fan and it was the next year that we got Rushmore – a movie that put Bill Murray on the map as a dramatic actor (though he still dabbled in comedy). Over the years, Anderson’s films have continued to display the same sort of tone and rhythm, giving us some fairly off the wall characters. With The French Dispatch, it’s more of the same and sporting a much larger cast. That’s fine. He can pull it off. And I’m sure the characters of this film would have a field day with this writer’s style.

It’s a bit strange that in the not too distant future we might have a generation that’s not familiar with reading a physical magazine. The French Dispatch watches just like reading one.

Arthur Howitzer, Jr. (Bill Murray) has died. In his will, he dictates that the newspaper: The French Dispatch of the Liberty, Kansas Evening Sun, will cease its operations. We meet Hersaint Sazerac (Owen Wilson) as he introduces us to the details of his city. At this point, the rest of the film is told in three vignettes: “The Concrete Masterpiece” focuses on jailed murdered Moses Rosenthaler (Benicio del Toro) who’s turned to art as he paints portraits of a female prison guard (Léa Seydoux). His work catches the eye of a collector, Julien Cadazio (Adrien Brody) who demands more of Moses work. We then move onto “Revisions of Manifesto” which showcases the protests of young French revolutionaries in 1968. Lucinda Krementz (Frances McDormand) reports on the ideas of a manifesto-writing teenager, Zeffirelli (Timothée Chalamet). Krementz offers corrections to his work and sleeps with him during her reporting. This is based on the work of actual journalists. Finally we move onto “The Private Dining Room of the Police Commissioner” in which Roebuck Wright (Jeffrey Wright) shares on a talk show. He’s set out to profile a local chef and police officer (Stephen Park). Things go awry and we’re sent into an animated car chase. These three stories are printed in the final issue.

To be sure, this film has a very different style and tone about it. It’s non-linear. But it also reads as if you’re reading a magazine (mentioned above). And it’s an interesting way to present a film. I’m sure that other critics are enamored with this one as much as I am. People who write (people much more talented than I) are a different breed and The French Dispatch plays to that. Anderson, nor any member of his cast don’t necessarily need the accolades nor the money, so it’s a testament to them for being part of it. I will say that if this is your first Wes Anderson film, it’s best to go watch another first. For those, like myself, who have seen the rest – this is yet another reason to tip our hats to filmmakers like Anderson.

Anyone who’s seen a Wes Anderson film should know what to expect visually. Well, let me amend that – anyone who’s seen a recent Wes Anderson film should know what to expect visually. Anderson’s movies have always have a somewhat muted color palette, but more so with his latest efforts. As expected, The French Dispatch showcases a variety of intricately-laid out scenes all featuring his trademark cotton candy colored palette (say that five times fast). But it works. Yes, it works. The film also uses a few different aspect ratios with the main one being a 2.39:1 scope, though we get the occasional 1.66:1 window-boxed look and a few black and white scenes as well. This one runs the gamut, folks. And if pastels are your thing – you’ll be in heaven.

To say that the films of Wes Anderson are dialogue-driven is, naturally, an understatement. His films ooze dialogue. And while this might not showcase the girth of your home entertainment system, there are enough subtle nuances in the score that make it worthwhile. Vocals are pinpoint sharp and crisp, the surrounds chime in at certain points, enough that I took notice, and the front stage handles the rest. It’s a nice, simple and understated DTS HD Master Audio mix that’s sure to please.

Here’s hoping you like the film, because this disc is void of any and all supplemental material. But, given that Criterion has released nearly every other Wes Anderson film as part of their collection, I’d wager that we’ll see a disc from them that will make up for the lack of extras that Fox/Disney failed to provide.

It’s highly unlikely that Wes Anderson will come out with a film that will ever eclipse my favorite – The Royal Tenenbaums. But you never know. The French Dispatch is everything we’d expect of Anderson and he gives us more of what his fans like. The cast is…big. Almost too big (that’d be one of the film’s detriments, if you ask me). The lack of supplements on this disc is disappointing, but as I alluded to – I’m sure we’ll see a version from Criterion at some point.