The Following: The Third and Final Season (Blu-ray)

It’s strange to think that it’s been fifteen years since we were treated (or tortured, depending on your particular point of view) to Dawson’s Creek. Yep, I went there. James Van Der Beek, Katie Holmes, you know the names.  Well I mention this not to make you squirm in your seat, but rather that it showed the range of writer/director Kevin Williamson.  That name, synonymous with the Scream and I Know What You Did Last Summer films, hasn’t gone away, no he’s just been biding his time! All kidding aside, I’ve actually been hearing via my parents that The Following was actually a pretty good show, one that they watch on a regular basis.  So when this arrived, I felt intrigued to check it out and, lo and behold, they were right.  I’ve always been a big fan of Kevin Bacon and seeing such an accomplished actor on the small screen is quite a treat (and his wife, Kyra Sedgwick, made quite a name for herself with The Closer).  Dark, demented, and dare I say it…original, the first season of The Following has me hooked.  Let’s dive in.

A year has passed since rogue ex-FBI agent Ryan Hardy (Kevin Bacon) finally capturing his nemesis Joe Carroll (James Purefoy).  With Carroll locked up on Death Row and Hardy back with the FBI – and in a stable relationship with an ER doctor (Zuleikha Robinson) – new threats emerge that have Hardy, Mike Weston (Shawn Ashmore) and Hardy’s newly agented niece Max (Jessica Stroup) on edge and off balance.  Unlike the known threat of Joe Carroll, each new danger is potentially more lethal because the FBI isn’t exactly sure where it’s coming from.  But with psycho twin Mark Gray (Sam Underwood) still at large, Joe Carroll still haunting Ryan from behind bars, Carroll’s murderous mentor Dr. Arthur Strauss (Gregg Henry) in the background, and a new, meticulous chameleon-like killer (Michael Ealy) circling, Hardy soon realizes that Joe Carroll was only the beginning.

Each of the episodes are presented in a 1.78:1 AVC HD transfer that looks superb. I caught a few of these on demand just so I could compare the over the air HDTV broadcasts to that of the Blu-ray and they’re essentially identical, but with an edge to the Blu-ray. The series is dark, gritty and I loved every minute of it.  Black levels are never compromised, contrast works well and I noticed no artifacting errors.  Flesh tones appear to be a bit washed out in some scenes, though I credit the filmmakers as opposed to an error in the presentation.  Modern television series look as good and sometimes better than feature films, and the first season of The Following looks just as good as we’d expect.

The included DTS HD Master Audio mix had a few moments that really took me off guard. Just as these television series look as good as films, they often rival them in the audio department as well.  Vocals are clear and crisp, Kevin Bacon’s deep voice permeates through the channels.  Surrounds are surprisingly fairly active, with them offering up some ambient sounds to compliment the front heavy sound stage.  I think the days are over when we classify television series and feature length films in two different audio and video categories – as with the video presentation, the audio is equally impressive.

Gritty and real, The Following is the kind of show that hits hard and fast. Admittedly it took me a while to get warmed up to the show, but once it’s got its hooks in you – you’re pulled in. At only three seasons, it’s the kind of show you can binge watch and Warner’s Blu-ray certainly does the show justice. Not for the faint of heart, this one is recommended. 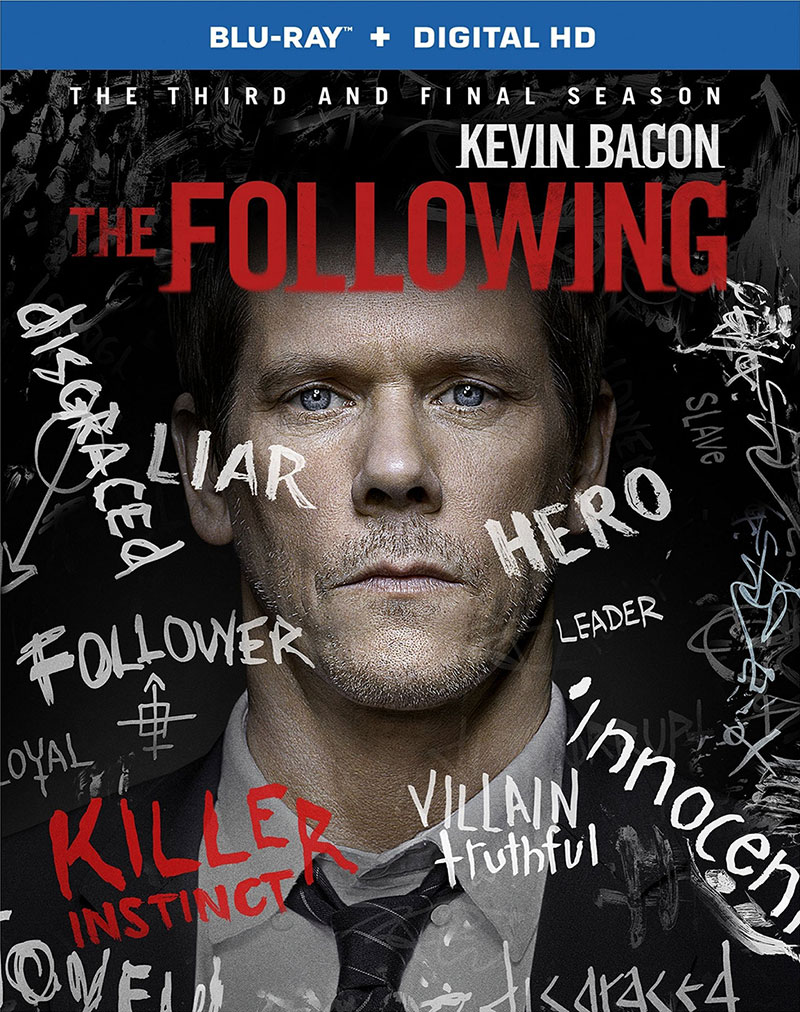