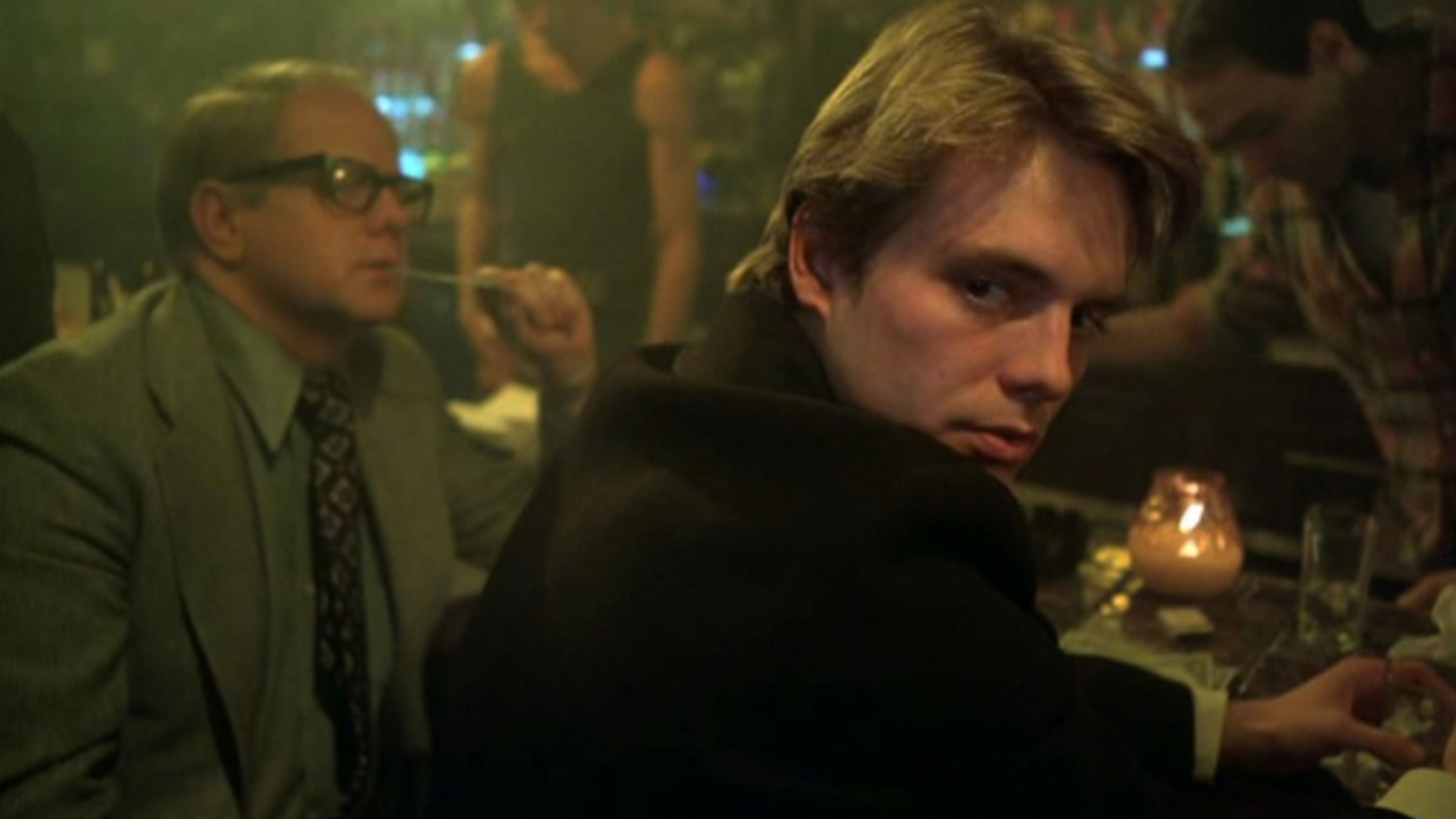 Starring a young Michael Biehn and an aged Lauren Bacall, The Fan was released in 1981 under a shadow of controversy because of the recent murder of John Lennon. I had never heard of the film, but I tend to watch basically everything that Shout!Factory releases. I watched the film over the weekend.

Actress Sally Ross (Lauren Bacall) has hit a bad patch in her career. She is past the prime years of her days in Hollywood and has been reduced to starring in a gaudy Broadway show. Her number one fan, record store worker Douglas (Michael Biehn,) is obsessed with her. He writes her letters expressing his desire and admiration for her, but he is met with responses from Sally’s secretary, Belle Goldman (Maureen Stapleton.) As Sally prepares for her Broadway show and tries to win back her former husband Jake (James Garner,) Douglas falls deeper and deeper under the spell of an obsessive psychosis. Soon, Douglas turns violent as he tries to get closer to Sally and begins wielding a straight razor towards anyone who gets in his way.

The Fan was a critical and commercial failure upon its release but has gained a cult following in the gay community since its initial release. I can absolutely see why this film would attract a gay audience. It has the iconic Lauren Bacall slumming it in a pseudo-slasher that has lots of scenes involving Broadway. In this sense, the film can be quite funny. I highly recommend watching the film with the excellent commentary track by Jeff Nelsen, David Decoteau, and David Del Valle. That track almost redeems the film and makes the act of viewing the film a lot more fun and entertaining.

For myself- and I am guessing for many – this film just does not quite work. As proven from the numerous special features, the script was rewritten as the film was being shot to appeal to fans of Dressed to Kill. I love that movie, but the methods used there are not applicable to what was meant to be a much more cerebral character study. The first director was replaced, and Ed Bianchi was only given three weeks to prepare for his first film. Lauren Bacall hated the rewrites of the script and the added in violence. This leads to a performance where she seemed to want to be anywhere but in this film. James Garner immediately distanced himself from the film afterward. Basically – the film is a mess. That said – as a curio I can see why people would want to see it. Like I said – it is Lauren Bacall slumming it in a pseudo slasher. That definitely will pique the interest of some film nerds and horror aficionados.

From my perspective – Michael Biehn gives a good performance in the film. It’s a little bit wooden, but it is not bad work. James Garner is charming, but he is given very little to do in the film. Lauren Bacall had aged so dramatically that it is very hard to take her seriously in this role. The film has the feeling of watching a lot of people coming together to have a bad time making a movie. The direction by Ed Bianchi has its moments and some well put together shots, but the film never comes together completely. There are some well executed moments, but he could have used a little more time to get things right. The highlight of the film for me was the great score by Pino Donaggio. It is just great.

Presented in 1.85:1 aspect ratio with an MPEG-4 AVC Encoded image, the 1080p presentation looks okay. This transfer suffers from heavier grain and some lack of focus. Visually the film is a little bit flat. This film’s original materials were probably not in the best shape. I think fans will be happy fr the upgrade, but this is not going to wow most consumers.

The audio presentation on The Fan is capably done. The DTS-HD MA Mono track sounds pretty great thanks to the fantastic score by Pino Donaggio. I love Pink’s scores and this one is no exception. This is Pino basically riffing off of Bernard Hermann. I can get behind that. Dialogue is clear and there is not real issue of note aside from some hiss during some quieter scenes.

The Fan is an oddity and will attract some curious horror and film aficionados, but it is not a very good film. I can understand how the film has become a cult classic to the gay crowd, and the fantastic commentary track almost succeeds in making the film enjoyable. The commentary track singlehandedly almost saves this film. I respect Shout!Factory’s decision to release this film on Blu-ray and the supplemental features are fantastic. Fans of the film will be elated to have this film in their collection.