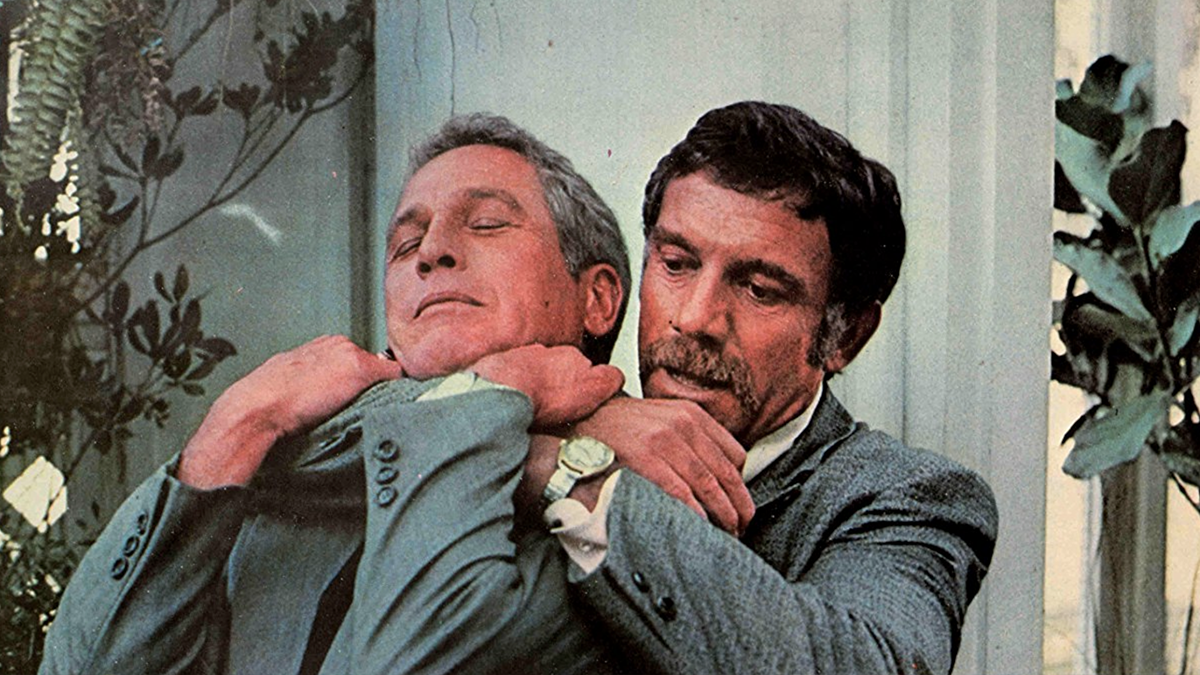 Warner Archive have recently released two Paul Newman led detective films based on novelist Ross Macdonald’s character Lew Archer. They changed the name of the detective to Lew Harper and featured him first in 1967’s Harper. Harper is not a perfect film, but has enough good qualities to recommend at least a rental. The second film in that series was 1974’s The Drowning Pool. Based on the Ross Macdonald novel, The Drowning Pool is penned by Racy Keenan Wynn, Lorenzo Semple Jr., and the amazing Walter Hill. It is very different from the first film as I will explain below.

Private Detective Lew Harper is brought from sunny California to New Orleans to assist an old fling, Iris Deveraux (Joanne Woodward.) Upon arrival into town, a young girl shows up in his hotel room and propositions him. Lew throws her out, but is picked up by the police anyway. Speaking with the Chief, Broussard (Anthony Franciosa,) he is able to plead his case. Broussard sets him free on the condition that he reports back to him on details regarding the Deveraux family. Meeting up with Iris, Harper finds out that Iris is being blackmailed. Somebody has sent her a letter accusing her of infidelity to her husband. Considering that the Deveraux family is so wealthy, she has no intention of getting divorced.  When Iris introduces Harper to her daughter, Schuyler (Melanie Griffith,) Harper recognizes that she was the girl from the hotel room. The next person he meets is Iris’s mother in law – Olivia Deveraux – a mean old bird. From there, Lew is escorted through the swampland to meet J.H. Kinkaide. Kinkaide has serious dirt on the Deveraux family and would like to find his way into their land so he can get at their oil. He would cut Harper in if he likes, all Harper needs to do is win over Iris and cause her to stray from her husband. When Olivia Deveraux is found dead, Harper begins to investigate wholeheartedly.

One of the obvious and best aspects of the film is that it is essentially a reunion of the cast from The Long Hot Summer. Joanne Woodward, Paul Newman, and Anthony Franciosa are all back together. While this movie is not nearly as good as that one, it is great to see them all onscreen together again.

The screenwriter of the first film, William Goldman, is not involved with this project. The new screenwriters were Tracy Keenan Wynn, Lorenzo Semple Jr., and the great Walter Hill. In retrospect, I feel like I can tell which parts Hill contributed to the script. Hill is easily one of the most enjoyable screenwriters out there, and I think whenever it feels like a Walter Hill movie it succeeds. This film has a plot that makes a bit more sense than the first film’s plot, but it suffers from some of the same writing issues as the first film, namely that it is hard to figure out how the plot seems to jump from scene to scene without a clear image of how he chooses which clues to follow.

Also absent from this outing is cinematographer Conrad Hall. One of the best aspects of the first film is how capably Conrad Hall could line up a shot. Without his presence, the new cinematographer Gordon Willis (also a legend) gives a very different look to the film that is much darker. Think of it this way – Conrad Hall shot Butch Cassidy and the Sundance Kid whereas Gordon Willis shot The Godfather. These films do not look similar, which I found jarring when watched back to back. These are two masters of the craft, but be prepared for there to be little similarities in their aesthetics.

Similar to Harper in its failings, and different from Harper in its successes, I think that I prefer the first film, but both are enjoyable and a little forgettable.

Video quality is very high. Fine detail is even better than was seen in the transfer of Harper. That said, this film is not nearly as vibrant looking as the Technicolor used in Harper. The cinematography by Gordon Willis looks great overall and anybody who has seen his work on films by Woody Allen or The Godfather Trilogy will know what to expect visually. The one thing that was strange to me about the visuals of the film is that the movie takes place in and around New Orleans and that city is hardly featured in the film at all. To me, their locations scout should have considered using a few prominent places there and it would have given the film a little bit more to look upon.

Warner Archive have provided a very competent DTS-HD MA 2.0 Mono track. Unlike the Herb Alpert style music in the first film, this score by William Small is much more melodramatic and repurposes the song “Killing Me Softly with His Song” for much of the score. It sounds pretty good overall and fits in with the setting in the Seventies. Audio quality is good, but I found myself annoyed at how hard it was to hear certain characters – especially Broussard. It shifts from very quiet to the fairly loud score routinely which made my job of controlling the remote a chore. I wish they had leveled this one a little bit more seamlessly.

The Drowning Pool is a capable sequel that is very different in style than the previous film but enjoyable in a different way. It still has some of the same failings as the previous film – such as the leads that Harper investigates still seem to fall out of thin air. This film is neither great nor bad. Overall, I enjoyed it but found it a little bit forgettable. I think that you may want to rent prior to purchase.