Alexander Payne has become one of the biggest “go to” guys in Hollywood. Like a Martin Scorsese, Steven Spielberg or Woody Allen it seems that he’s a director that any actor would want to work for. And with good reason. I’ve been a fan of his since 1996’s Citizen Ruth starring Laura Dern. From there he went onto make the dark comedy Election, worked with Jack Nicholson in About Schmidt, though it wasn’t until 2004’s Sideways in which he finally broke through. The latter earned him a Best Picture nomination as well as nods for Best Director, Best Adapted Screenplay and both Supporting Actors. It ended up winning for Best Adapted Screenplay, just as The Descendants did, but it put him on the map. Seven years went by before Payne once again stepped behind the camera (for a feature-length film, he’d done other side projects), this time working with Hollywood’s Golden Boy – George Clooney. Payne once again wrote the screenplay for the film and was directing, but the question remained – would the magic still be there?

Clooney plays Matt King, a lawyer and the executor of his family’s estate. The family owns a large share of land and the trust ends in seven years. Selling the land will make he and his family very wealthy, though Matt has managed his finances a bit more wisely than others. This is one problem. The other is that his wife, Elizabeth (Patricia Hastie), has was injured in a boating accident and is now in a coma. Though Matt’s hoping for a speedy recovery, the doctors say otherwise. Add to this that Matt’s eldest daughter, Alex (Shailene Woodley), is having problems of her own. She’s away at boarding school for reasons unknown. Matt learns that he’s going to have to pull his wife off life support and wants his family together. It’s at this time that Alex informs her dad that Elizabeth was having an affair and had planned to leave the family. Matt King has seen better days.

I don’t have the power of the pen like Alexander Payne, so I’m sure that my synopsis of the plot was a bit rough. Still, this doesn’t take away from the fact that The Descendants was one of the best films of 2011 and rightfully nominated for several Academy Awards. I still prefer 2004’s Sideways because I thought the performances were a bit better. Well that and I love wine! But Payne’s movies do provide thoughtful, character-driven dramas about average people. There’s no doubt that Clooney gives a stand out performance, though he lost out on the Best Actor statue to Jean Dujardin in The Artist. The film is a bit hard to watch, there’s not a lot of positive energy floating around, then again it’s about real life and sometimes…things don’t always go our way. Fans of Payne’s films will flock to this, for sure, but if you want to see Clooney at his finest then there’s no better place to start.

Filmed on location in Hawaii, The Descendants has plenty of opportunities to showcase the beauty of our 50th state. Fox has issued this Blu-ray in a very nice-looking 2.40:1 AVC HD transfer that looks just as we’d expect – good. Fine detail is amazing, we can see the patterns on the shirts, the grey streaks in Clooney’s hair and the scruff on his face. This isn’t a movie like Into the Blue where every scene is sun-soaked with colors galore, though. A number of the scenes are a bit on the under saturated side, to be honest. I found contrast to be within normal parameters as are black levels. Some of the scenes seem a bit on the soft side, so I’m not sure if it’s a fault of the transfer or if it was intentional. It’s a good-looking film and viewers will find little, if anything, to complain about.

The DTS HD Master Audio soundtrack isn’t really something that you’ll want to turn up. Payne’s movies are almost all about the dialogue and there’s plenty to go around. Some scenes do have some background ambiance that give a nice lift, but the front stage will get the majority of the workout here. Like Sideways, there’s a nice and interesting score here, though it’s nothing too memorable. Vocals sound strong and crisp, as we’d expect. It’s a good mix and again, one that people won’t find much wrong with.

Fox has wisely added several goodies to this Blu-ray edition, though the absence of a commentary track is kind of off-putting. Still, we do get several conversations with Clooney and Payne. We start out with “Everybody Loves George” which pretty much says it all. I mean, who doesn’t like George Clooney? Give this a viewing and you’ll see why he’s the man who’s hard to hate. “Working with Alexander” is just that, cast and crew laud praise on the Academy Award winning writer. “Hawaiian Style” shows us how the film was blessed by a priest and we get some reactions by the cast and crew. Moving onto the Blu-ray exclusives we find “The Real Descendants” in which two Hawaiians tell us of the land they’ve had for generations and they give us a tour of the estate. “Casting” shows us how the actors auditioned for their parts (except for Clooney, Beau Bridges and Robert Forster). “Working with Water” shows us the challenge of working with and in the elements as well as some insightful advice from the cinematographer. A trio of music videos are included as is “Waiting for the Light” as the cast literally waits for light so they can start to shoot a scene. “The World Paradise – Hawaii” is a black and white short that shows off the natural beauty that is Hawaii. The most intriguing feature is “A Conversation with George Clooney and Alexander Payne” as the two talk about the movie and other films that inspired them. There are also several deleted scenes with an introduction by Alexander Payne, the original theatrical trailer and a digital copy of the movie. 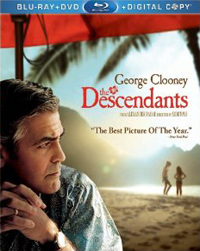