The Dark Side of the Moon (Blu-ray) 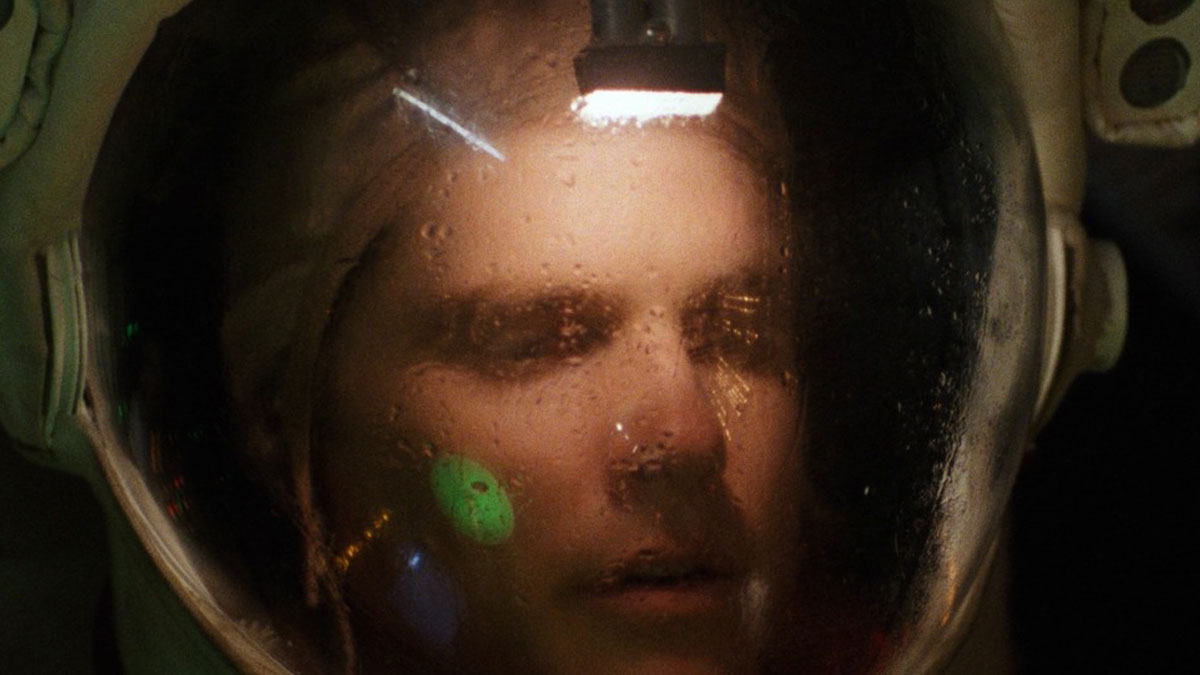 Unearthed Films is an up and coming film distribution label. Recently they partnered with MVD Distribution to release H.P. Lovecraft’s The Unnamable. The success of that release insured more titles. Now the label has released the 1990 science fiction/horror hybrid Dark Side of the Moon on Blu-ray with a new 4K restoration. I have a real soft spot for science fiction from the Eighties and Nineties, and this straight to VHS film hits some high notes considering the small budget.

The film opens with this title card:

“The year, 2022. The maintenance ship SPACECORE 1 is on a routine “refab” mission. The refabs are fixers. Their purpose is to repair nuclear-armed satellites orbiting high above the earth. Due to the atomic capabilities of these satellites, refabbing is considered dangerous… Very dangerous.”

While trying to call Houston, Giles (Will Bledsoe) and Flynn (John Sampson) experience problems with their communication equipment. They call Paxton (Joe Turkel) who asks the onboard computer – a female cyborg named Lesli but she doesn’t give any reasons why teh equipment has failed. The ship begins to experience more issues. They  are informed by Jennings (John Diehl) that they have twenty four hours before the maintenance ship will lose its oxygen reserves and become freezing cold because the auxiliary power is having trouble. Looking out the window, Alex sees an unidentified space ship coming toward them. Nobody boards their ship when they dock, so Giles and Flynn decide to board the ship. There is something strange about the atmospheric readings on the ship but they need the oxygen from the ship so they connect with it. Strangely enough the ship seems to be an old NASA vessel, but NASA hasn’t flown in thirty years. On the ship they find core samples from Centrus B-40 – the dark side of the moon. Looking through the ship, they soon encounter a freshly dead body of a Captain Gotie. When Giles and Paxton ask Lesli about the ship, it reportedly crashed in the Bermuda Triangle. So why is it in space? What happened to Gotie? Why is there a triangle shaped hole in his chest? Unbeknownst to the crew, they have let something ancient and evil onto their ship.

Dark Side of the Moon is an ambitious low budget film. The script was written by the Hayes Brothers who would go on to write The Conjuring series of films. The film is a mash-up of ideas from The Thing, Alien, and The Exorcist. The film borrows from good material but never matches the level of quality that those films achieved. That said, as a fan of all of those movies it was fun to see how their ideas would play off one another. While the script is certainly of the “everything and the kitchen sink” variety, it is still a fun piece of fiction.

The film was directed by D.J. Webster. This was his only film. He went on to direct a lot of Amy Grant music videos. As a director, I thought he did a pretty competent job. The film is definitely lo-fi, but the set design and effects are way above average for a low budget film from this era. The movie was made for 1.2 million (as evidenced from the special feature that showed the complete budget.) The optical effects that were done in camera stand the test of time and look pretty good. The casting for the film is pretty solid because it has four reliable character actors: Robert Sampson, Joe Turkel, John Diehl, and Alan Blumenfield. All four of those actors have played second fiddle in over a hundred roles. Turkel is recognizable from The Shining and Blade Runner. Diehl is recognizable from The Client. Sampson is recognizable from Re-Animator. Blumenfield has been a supporting actor in 185 projects. Will Bledsoe, the lead in the film, has the least acting credits and this was his final film, but he is absolutely adequate in the lead role. The recognizable character actors definitely add to the appeal of the film.

Dark Side of the Moon blasts onto Blu-ray courtesy of a new 4K restoration from Unearthed Films in 1.78:1 aspect ratio. The new 4K transfer looks really good. Understanding the inherent budget constraints and the fact that this film was developed as a vehicle for VHS label Vidmark, the picture looks as detailed as it is ever going to get. It was obviously shot on fairy inexpensive film stock and has that look, but it is obvious that Unearthed Films put some good work into the restoration.

The Dark Side of the Moon has an LPCM 2.0 stereo track that is adequate. There are some scenes where the audio has some distortion – most notably in a scene where the character of Alex screams loudly – but for the most part the track sounds pretty good. As long as fans go in with the right expectations, there is no reason to dislike this track.

Dark Side of the Moon is a fun and campy straight-to-VHS film. While the plot is ridiculous and the film is by no means perfect, I have seen far far worse films from this genre. I think that fans of the campy cult classics released by Shout!Factory and Arrow Video will find themselves right at home here. The transfer of the film looks and sounds pretty darn good. I look forward to seeing what releases Unearthed Films focuses on in the future.