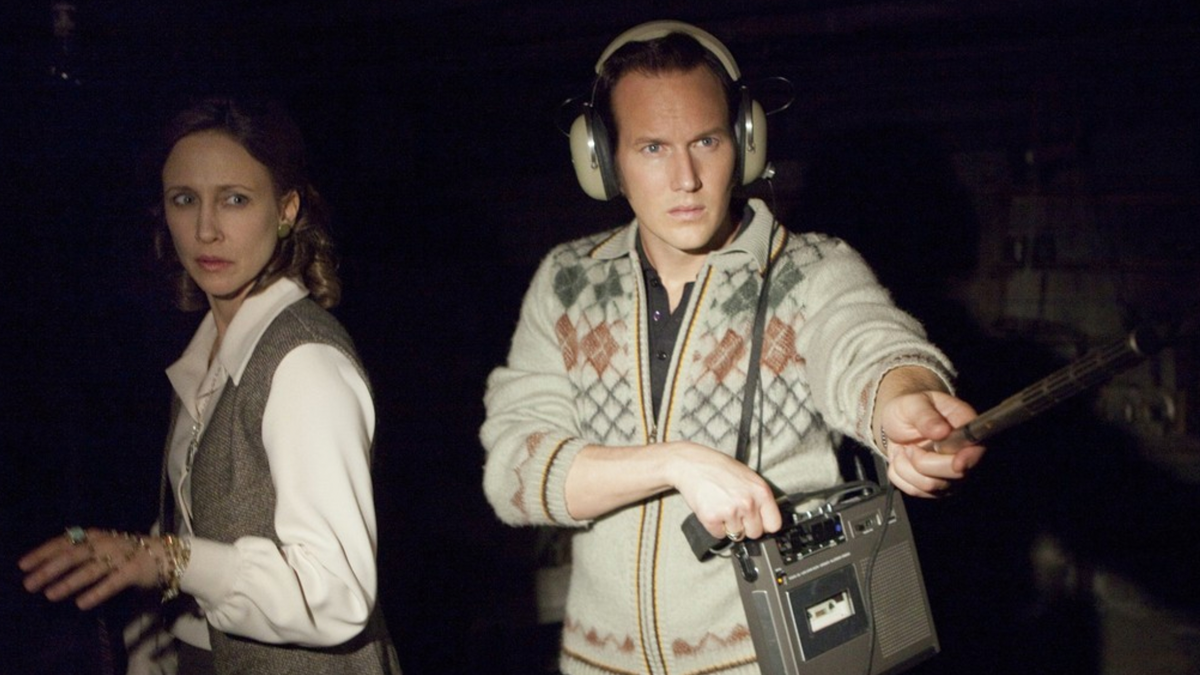 I’m not easily frightened.  I wish I was, but maybe it’s the thousands of movies that I’ve sat through over the years that have desensitized me. Or maybe I’m just not easily scared?  I will say that Stanley Kubrick’s The Shining is one movie that will make me have trouble sleeping at night.  I guess it’s more the psychological terror that gets me as opposed to things that go bump in the night (or in this case, a haunted house/exorcism).  I’m also way too logical to really believe in ghosts and the like. I watch these shows like Ghost Hunters and just sit there laughing.  A team of wannabe filmmakers stumble around a house with a video camera and then look around every time they hear a sound.  Give me a break.  I mention all of this as I don’t really believe in demonic possession or anything that’s supernatural at all. It defies logic and if anything, I embody logic.  That and I’m Catholic (don’t ask me why), so I suppose there’s at least some part of me that says I should or want to believe in the power of Christ if one person is said to be possessed by Satan.  Right. Moving on…

Meet the Perrons, a nice family of 7 with five daughters, a doting wife (Lili Taylor) and a hard-working husband (Ron Livingston) that have just moved into a new house.  It’s 1971 and the Rhode Island estate that they’ve purchased seems to be the house of their dreams.  That is until they start hearing noises in the middle of the night.  The house is perpetually cold and all of the clocks stop at 3:07 a.m. Other than that, everything’s great! Carolyn (Taylor) decides to seek out some help for their troubles and finds husband and wife team Ed (Patrick Wilson) and Lorraine (Vera Faminga) Warren.  Ed and Lorraine specialize in things like this, though they’re not officially “exorcists” as far as the Catholic church is concerned.  However they’re nice folks and they decide to investigate only to find out that there is indeed something amiss.  A demon has attached itself to the family and it’s not exactly easy to get rid of it. The Perron’s can’t run or hide, but must rely on the power of Christ to save them and their house.  Will it work?

Movies like this are hit and miss and if in the wrong hands, I can see this being a total disaster. Thankfully James Wan (Saw, Insidious) is the man with the plan and he’s brought a sense of authenticity with him to the film.  Not only does the movie look like it was shot about 40 years ago, the performances are convincing as well.  As I mentioned at the forefront of this review, I really don’t believe in things like this, but while watching the movie with my wife – her hand never left mine and tightened at just the right times.  Seeing the emotional toll it took on her made me realize and appreciate how scary this movie could be if you’re willing to resign yourself over to the film. I, obviously, wasn’t.  One thing I did appreciate was that the movie seemed to avoid any of the obvious pratfalls that so dominate movies like this. Minimal violence and language – just the supernatural at its best trying to scare the hell out of you.  And it just might if you let it.

Any film about a haunted house and/or the supernatural will most likely be, I’m assuming, very dark in both tone and nature.  Sure enough, The Conjuring comes to Blu-ray in a 2.40:1 AVC HD transfer that’s as dark as they come.  Though the movie is placed in the early 70’s, it’s those scenes at night that really leave their mark on you (sometimes literally).  Black levels and shadows in the movie are of the utmost importance, contrast is well-balanced and I found no evidence of macro-blocking or movement in the darks.  The outdoor scenes are rich and saturated in some earthy tones, we even see some things that I’d forgot existed – like tape recorders.  Detail is outstanding as well with Patrick Wilson’s sideburns and Ron Livingston’s five o’clock shadow being very noticeable.  A great effort from a new to Blu-ray film.

Ok, either these newer films are really using new and inventive techniques to use the LFE or my sub woofer is blown. After watching Pacific Rim the other day I’d remarked that “I’d never heard sounds like this come out of my sub…” well this marks the second movie that has put it through the motions and I do have to say, with great effect.  Vocals are crisp and clean and I’d forgotten what Lili Taylor’s voice had sounded like with her Minnesota accent and all.  There are a few scenes that have a supernatural “whisper” to them and it only adds to the tension.  Surrounds are used with great effect as well (this is a haunted house movie, after all).  This DTS HD Master Audio mix is nothing short of perfection.

Seeing as how Warner continues to unearth supplements for The Exorcist, a film that’s four decades older than this, I find it hard to believe that these three featurettes are the only thing that could be added to this Blu-ray, but nevertheless – ’tis better than nothing.