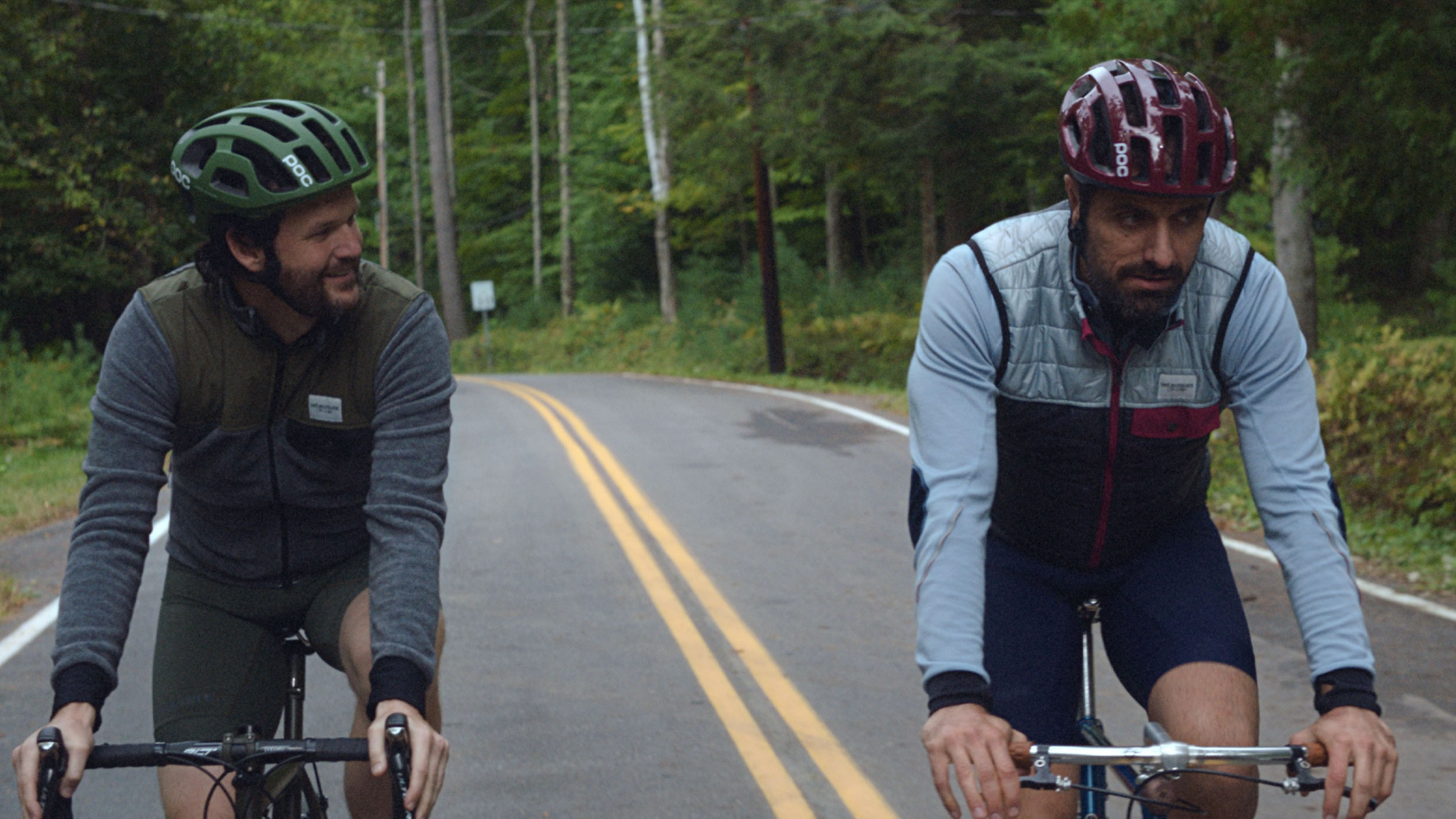 Films about relationships are often a mixed bag. Let’s face it, they either work or they don’t. In the case of Annie Hall (and countless others) it hit the nail on the head. I still quote that film when the couple are being asked questions by their respective psychairists: “How often do you have sex?” to which Allen’s character replies “Hardly ever, I’d say like two to three times a week.” Diane Keaton’s character replies “All the time, like two to three times a week!” And that, to me is the fundamental difference between men and women. By no means am I comparing The Climb to Annie Hall, but there are a lot of similarities. Filmmaker/actor/writer Michael Covino and friend and co-star Kyle Martin filmed a 9 minute vignette and used that to make this film (more on that below in the supplements section). It’s a rather unconventional film with a rather non-linear (yet linear) narrative that takes place over the span of several years. And I loved it.

We meet Mike (Michael Covino) and best friend Kyle (Kyle Martin) as they’re riding up a steep hill in France. Kyle is gushing about this upcoming wedding only to be cut off by Mike who tells him that he’s been sleeping with his fiancé. By the end of the scene Mike is beaten to a pulp, not by Kyle but by a passing motorist who Mike verbally abused earlier. This sets the stage for the series of vignettes to follow. We learn that Mike has succeeded to steal away Kyle’s fiancé and married her, and we learn she died a few years later. There’s a funny scene at her funeral. We also follow Mike through a lot of self-discovery as he succumbs to alcoholism, looking back at his past and wondering what to do with his life. By comparison, Kyle seems to be doing OK at life.

To tell any more would be unfair to the viewer, suffice it to say that it’s worth the trip.

As I alluded to earlier, the film is shown in a series of “one take” vignettes. These aren’t actually one takes, rather a series of shots that make it look like it’s one take (think Birdman). And they range in time from a few weeks to months to years. The best way I can think to describe it is like Pulp Fiction, each segment can technically take place on its own, but it’s all part of an overarching bigger picture (pardon the pun). I’m sure we’ll see more of Michael Covino and is work in front of the camera is as impressive, or perhaps moreso, than behind it. We’ve seen films like this from Stephen Soderbergh, Kevin Smith and countless others which has catapulted them into the Hollywood limelight. Might we be witnessing this with Covino? I think so.

Presented in a rather unconventional aspect ratio of 2.00:1, The Climb isn’t one of those films that’s going to showcase the beauty of your HDTV/4K television. It’s grainy, lacks the detail of films with a larger budget and has a few faults along the way. But then again, so do all of us. In the effort of full disclosure, Sony did send along a DVD when this initially came out, but I liked the film so much that I purchased the Blu-ray and that’s what’s being used for this review. In essence, this title screams “low budget” and, well it is. Several of the scenes suffer from a bit of instability, grain persists though not the point where it’s unwatchable and some of the lower light shots are downright ugly. But it does fit with the theme of the film. The Blu-ray does offer a better overall (more consistent) picture compared to that of the DVD. If anything this shows how spoiled we’ve all become with modern technology.

As we might expect, the included DTS HD Master Audio mix isn’t anything to write home about (the DVD has a Dolby Digital 5.1 track). While vocals remain clear, there are a few times when I had to turn the volume up to get a better feel for what was being said. There are a few areas of the film which utilize the surrounds, but not many. This is dialogue-driven as they come, so while the “upgrade” to a DTS track on the Blu-ray was nice, it really doesn’t offer much more than the DVD’s 5.1 offering. It’s a good, but not great, track.

The Climb won’t be for everyone. My wife and I started the film and only I finished it. It’s got a very slow pace to it and the setup of the film won’t be for everyone. But there’s a lot underneath the surface. Certainly the movie doesn’t look or sound as good as others out there, but so what? It’s films like these that keep my interest in movies going. I loved it.