Hemingway is my favorite author. I know it is cliché, but when I read The Sun Also Rises in my freshman year of college, it was a life changer. Pretty much every place I visited after that novel, I always had one of his novels along with me until I had finished every last one. I remember that I finished To Have and Have Not while in the town of Monterosso in Cinque Terre. There are certain memories that are made so much better by a great book. As I perused through the more recent films that Criterion has released, I saw that the film The Breaking Point was loosely based on To Have and Have Not. The director Michael Curtiz is known for a film called Casablanca and made this version of the novel just six years after the Howard Hawks version. With my interest piqued, I sat down and watched the film.

The story of the film revolves around struggling boat captain Harry Morgan (John Garfield.) Harry came home from the war and started a family, but despite being a war hero he has failed miserably at his boat charter business. Harry has a loving wife named Lucy (Phyllis Thaxter) that supports her husband even though he is not much of a provider for their two daughters. A rich man named Hannagan charters Harry’s boat and brings along his girlfriend Leona Charles (Patricia Neale.) Harry brings along his friend and first mate Wesley Park (Juano Hernandez.) Hannagan surprises Harry by requesting that they go all the way to Mexico, but for eight hundred dollars he agrees. Along the way Leona begins to come onto Harry, despite Harry’s protestations that he has a loving wife and children. In Mexico, Hannagan skips out on his bill and leaves Harry, Leona, and Wesley stuck in Mexico without funds. Harry has little choice but to compromise his morals and accept a dangerous smuggling job from his scumbag lawyer acquaintance F. R. Duncan (Wallace Ford.) Duncan has some Chinese men that want into America illegally on Harry’s boat. This job will send Harry into a desperate struggle to provide for his family through any mean’s necessary.

This is said to be the only adaptation of any of his work which Hemingway personally approved. For fans of the novel, many liberties have been taken with the story. It is not a perfect adaptation of the material, but what it retains is the spirit of the material. This is largely due to an excellent performance from John Garfield. Garfield was blacklisted as the film came out and died two years later from a heart attack and the young age of thirty nine. It’s unfortunate. Garfield is perfectly cast in the film and makes the film feel like the book even when the script differs wildly from the source material.

The other actors in the film turn in solid performances. Phyllis Thaxter is very good as Harry’s adoring wife Lucy. When she dyes her hair out of nervousness caused by the other woman, it’s pretty heartbreaking. Patricia Neale is not my favorite femme fatale, but she does exude an unlikable quality that makes her character feel realistic and like the type that would try so hard to lure a married man. My favorite side actor was Wallace Ford as F.R. Duncan. He is great in the film as the back dealing lawyer.

Michael Curtiz does a good job directing in a way that does not show off. This man can direct a film and he did not feel the need to make the camera movements noticeable in this film. The finale in particular is a very well-orchestrated action sequence that is just as effective today as when it was released. All of the location shooting adds realism to the film and breathes life into the story.

Overall, this is a solid piece of filmmaking. While this film is not as memorable as the Howard Hawks helmed production, it is closer in spirit to the novel, despite changing much of the story.

Criterion always do a good job describing the work they did in the liner notes:

This new digital transfer was created in 2K resolution on a Lasergraphics Director film scanner from a 35mm safety fine-grain positive made from the original camera negative. Thousands of instances of dirt, debris, scratches, splices, and warps were manually removed using MTI Film’s DRS, while Digital Vision’s Phoenix was used for jitter, flicker, small dirt, grain, and noise management.

The new 2K 1080p transfer of the film in its original aspect ratio of 1.37:1 looks really good. Criterion have always had good luck restoring black and white films and this is no exception. Fine detail is excellent and the movie clearly looks the best it ever has.

Once again from the liner notes:

Criterion Collection have provided an LPCM mono track that does the film good justice. Dialogue is crystal clear. There is no hiss. There are no cracks, thumps, or anything to distract from the film. Criterion always does their due diligence and while this track is not very bombastic, fans should be pleased.

The Breaking Point is a good piece of filmmaking that captures the essence of the Hemingway novel which it is based upon. That said, the film itself is a little bit forgettable. I am not sure how much replay value this will get from me, but I did enjoy it. The supplements are a little bit thinner than Criterion typically put on their disks, but the video transfer and audio transfer are very well done. Recommended. 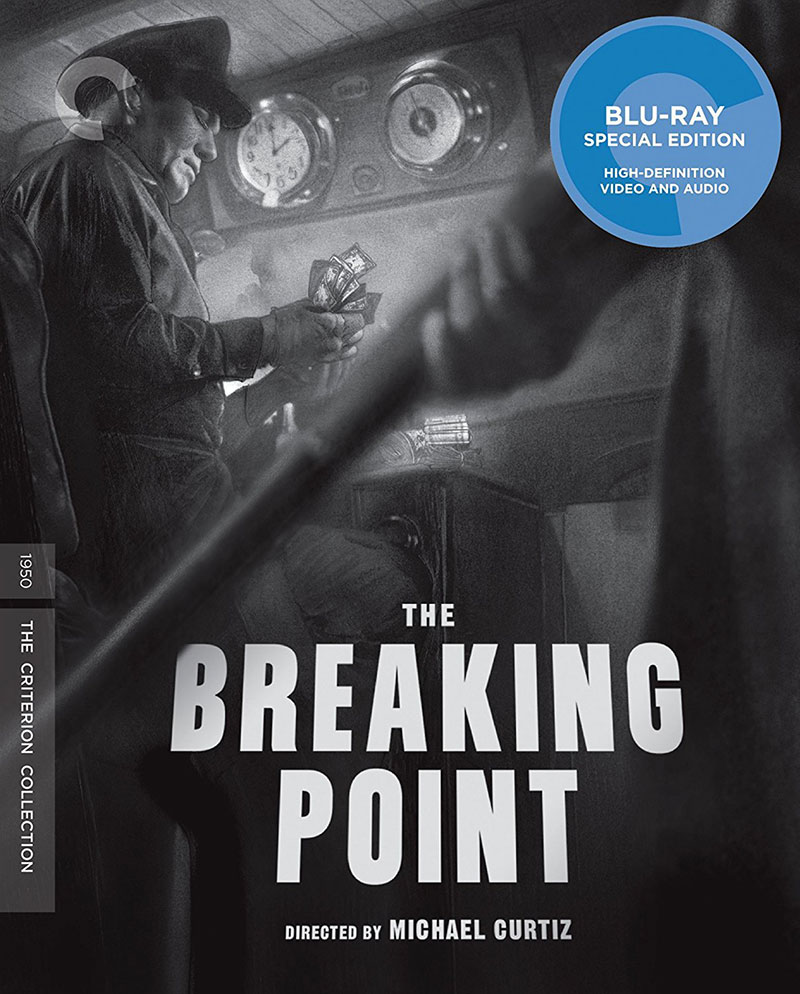