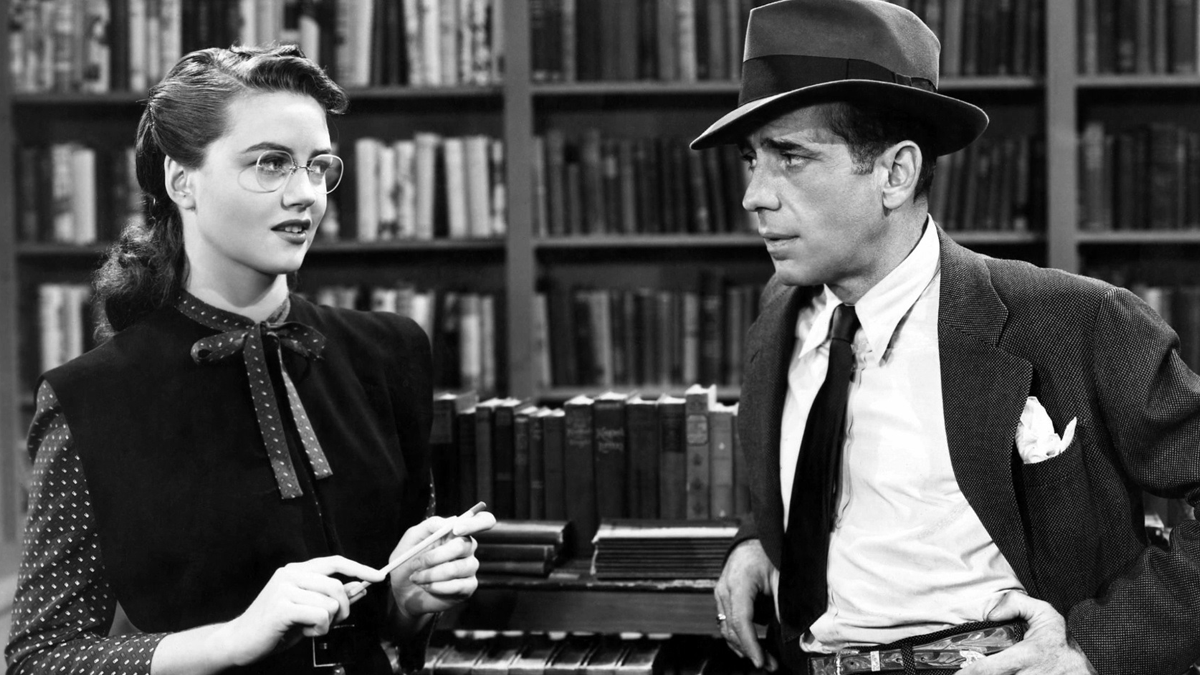 Warner Bros has made a concerted effort over the last couple years to give their Archive Collection some of their most prestigious titles from the Film Noir they have in their collection. To test out the economic feasibility of these titles they started with the films that were a sure thing – To Have and Have Not, Dark Passage, and The Big Sleep. All three feature Humphrey Bogart, easily one of the most recognizable actors of the last century. Two of these are directed by Howard Hawks and all three feature Lauren Bacall, whom Bogart would marry by 1946. I sat down yesterday and watched The Big Sleep and now I am sure I will find myself watching the rest in the very near future.

The story revolves around one of the best known fictional private detectives of all time, Philip Marlowe (Humphrey Bogart.) Marlowe is called to the house of General Sternwood (Charles Waldron.) Upon arrival to the vast estate, Marlowe meets Carmen Sternwood (Martha Vickery,) the younger of the General’s daughters. Carmen is wild and childish. She makes a pass at Marlowe before he can even meet with the General. In their meeting the General explains that he is being blackmailed. A year earlier he paid Joe Brody for some blackmail. His man Sean Regan has disappeared that was sent to take care of the blackmail. Arthur Gwynn Geiger has sent a notice for collection related to gambling debts accumulated by Carmen. Geiger has been threatening their family over the debts. Marlowe accepts the case and says he will look into the issue. Before he leaves the house he meets the beautiful Vivian Rutledge (Lauren Bacall.) Vivian worries about her sister. Marlowe starts following the suspicious book dealer, Geiger. When Geiger ends up dead in a room with the passed out Carmen and photographs are missing from the scene, Marlowe must navigate the numerous parties involved.

The Big Sleep was one of the absolute best novels by celebrated author Raymond Chandler. For my money, Chandler is one of the greatest novelists of all time. I have read every single novel he ever put to paper and he was a master with prose. He understood the art of plotting a story. Chandler’s plots are always very intricate with numerous pieces coming into place, so it is natural that the debut of his work onscreen would be a little bit confusing at times. This is despite the best intentions from screenwriters Leigh Brackett, Jules Furthman, and William Faulkner. You are reading that correctly. One of the greatest novelists in American fiction penned the screenplay from a Raymond Chandler novel. Despite some of the confusion from trying to fit all of Chandler’s subplots into the film, the screenplay features good dialogue and there is very little fluff. From the first scene on the film moves forward towards a satisfying conclusion. That is strong praise for any film.

It is great to watch Humphrey Bogart as Philip Marlowe. I can’t help but picture him whenever I read the Chandler mysteries, although both Elliott Gould and Robert Mitchum have given good turns as the character. The truth is that Bogart encapsulated two of the great detectives: Sam Spade (of The Maltese Falcon) and Philip Marlowe. Bogart has the right look: a sort of rugged everyman look that is inexplicably handsome. If you were to quantify what makes Bogart so great, I think the face is where you start, but then you move on to his actual chops. The man could act. If you want to have your heart torn out, check him out in In A Lonely Place. When he plays a detective he can’t be outdone, and that is what elevated this film to classic level. Watching him play against Lauren Bacall (his best leading lady) is a real treat. When they chose to reshoot certain scenes with Bacall they got a much more interesting performance from her (and therefore a better film in my opinion.)

Howard Hawks does a great job of direction. The casting of each part is spot on for the characters from the novel. I particularly enjoyed both Martha Vickery and John Ridgely in their supporting roles. The film has striking black and white cinematography by Sidney Hickox whom had also worked on To Have and Have Not (where Faulkner adapted Hemingway.) The shots are not all that stylish, but each shot effectively conveys the reason for its existence. In fairly wide angles the viewer is allowed to constantly take in the surroundings. This is an effective approach given the amount of turf that Marlowe covers over the course of the film.

Lovers of film noir already know this film is required viewing. Bogart, Bacall, Hawks, and Faulkner adapting Chandler. That’s a cocktail I could drink fairly regularly. Check it out.

Warner Bros. did a fantastic job on the transfer of the film using an MPEG 4 AVC codec of a new 2K restoration in gorgeous Black and White in its original aspect ratio of 1.37:1. It is absolutely crystal clear. Honestly, I have been really impressed with the restoration work on the Archive releases and this one looks as good as any of their best work. There is a huge jump in detail between the DVD and the Blu-ray. Fans should spend the money for the upgrade based simply on this transfer. It looks amazing.

As a mono mix front speakers are used for the entire mix. Clarity is solid. I did not detect any dropouts or overbearing hiss. Like many of the Archive tracks, they have done their due Sullivan experience and recreated the original sound mix to the best of their ability. The score by Max Steiner fits the film very well and is present for the course of the entire film. Fans will be pleased.

The Big Sleep is a classic detective film. Humphrey Bogart is perfectly cast as Philip Marlowe. While the film can be a little clumsy with certain plot elements, it is very easy to forgive any shortcomings whenever Bacall and Bogart interact on the screen. Warner Archive have provided a truly incredible transfer of the film and the supplements included are interesting and worth your time. I wish that Warner had considered putting the alternate cut in a full HD transfer, but beggars can’t be choosers. This should be a welcome entry in any classic film lover’s library. Highly recommended.