The Bad and the Beautiful (Blu-ray)

Kirk Douglas was always willing to take a risk to play a role. If the script was well written he would champion it, even if the main character was unsympathetic. A perfect case in point would be the fantastic Billy Wilder film Ace in the Hole. It features a dynamite performance by Douglas as a truly despicable human being. WB Archive has released on Blu-ray the Hollywood melodrama The Bad and the Beautiful. This film gave Kirk Douglas an opportunity to skewer the machinations of Hollywood and also play a character that indulges in betrayal as often as friendship. This territory would be explored again by Douglas and director Vincente Minnelli in the film 2 Weeks in Another Town ten years later. The Bad and the Beautiful is an entertaining black and white melodrama with writing that elevates it above many of the melodramas of that time.

Three people are gathered in the office of producer Harry Pebbel (Walter Pidgeon.) If they are willing to do a picture with Johnathon Shields (Kirk Douglas,) the picture will receive two million dollars in funding. In a flashback, the famous director Fred Amiel (Barry Sullivan) recounts how he met Johnathon eighteen years earlier at a funeral. Johnathon’s studio magnate father Hugo had passed away after squandering his wealth. Fred accidentally insults Hugo’s lineage when he does not realize the relation to Johnathon. Fred had been hired to mourn Johnathon’s father with the last of the cash leftover from Hugo’s studio failure. Johnathon and Fred kindle a friendship after Fred’s apology. Johnathon decides to play producer Harry Pebbles in a card game with the hope of gaining his friendship. This lands him a production job on some B-movies. When Johnathon and Fred manage to make a good B-picture out of a bad script, things look up for Shields Productions. When they visit the boarded up home of deceased actor George Lorrison, they stumble upon a crying drunken daughter named Georgia (Lana Turner.) Fred shows Johnathon his amazing script for The Faraway Mountain, and when Johnathon has a chance he takes advantage of Fred. The film then relies on flashbacks for the other two people in the room. The second person in the room is Georgia, now an actress. Johnathon built her up and then let her down. The third person in the room is an author named James Lee Bartlow (Dick Powell) who Johnathon brought into the Hollywood system and then severely wronged.

The Bad and the Beautiful is a solidly made film. The writing is more clever than I anticipated. It is a melodrama for certain but it has some nice touches. It manages to capture an interesting time in Hollywood history. It captures the time when the first studio heads that had built Hollywood through the silent age were starting to die off and new blood was starting to enter the system. The writing still lays on the drama fairly thick, but the story manages to have just enough bitter elements to work. That said, I am not totally sold that the ending works. It almost seems tacked on, but that may just be my opinion.

The acting in the film is well done. It is hard to beat Kirk Douglas. He passed away recently and he was one of the last of the living icons from that period of Hollywood history. He dominates the film with a firebrand performance. Lana Turner is beautiful and well cast in her role. I also enjoyed the performance byBarry Sullivan. The direction by Vincente Minnelli can not be a faulted. The film benefits from some well done black and white cinematography by the legendary Robert Surtees who worked on films including Ben Hur and The Graduate.

The transfer provided by Warner Archive is quite beautiful and definitely not bad. It is actually about perfect. Presented in 1080p in 1.37:1, the film looks fantastic. Owing to the excellent black and white cinematography of Robert Surtees, the film shines on Blu-ray. Blacks, whites, and grays are all lush and inviting. Contrast is excellent. Fine detail is robust. Fans should be enchanted by the results.

The new DTS-HD MA 2.0 track sounds great. There is no hiss. Dialogue is clear. This is a dialogue driven film primarily but the upbeat orchestral score by David Raksin has been given a solid boost. Fans will be pleased.

The Bad and the Beautiful is an uncommonly thoughtful melodrama featuring some strong performances by Lana Turner and Kirk Douglas. The only aspect of the film that doesn’t quite fit is the ending. The direction by Vincente Minnelli and cinematography by Robert Surtees are both well done. The transfer of the film is beautiful and will please fans. The documentary included will be of note to fans of Lana Turner’s work. 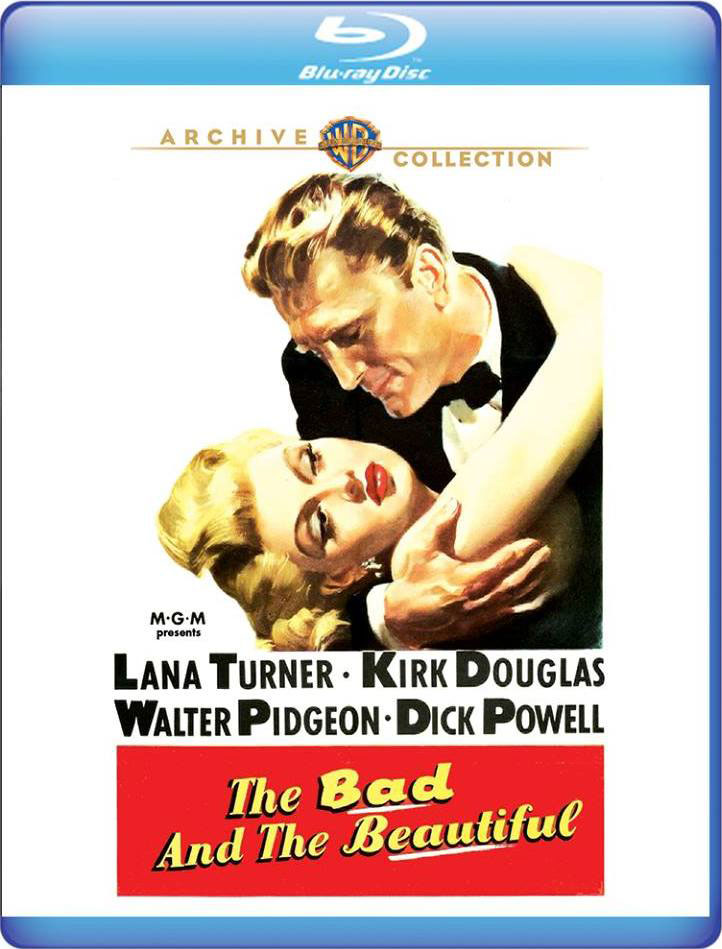