The Adventures of Tintin (Blu-ray)

Over the years, my opinion of Steven Spielberg has varied. While it’s impossible to deny some of his great works like Jaws, Raiders of the Lost Arc and Schindler’s List he’s also been behind some recent failures. Granted a “failure” for Steven Spielberg is widely considered a hit for anyone else. That’s what happens when you’ve set the standard so high. The latter part of 2011 had Spielberg with two movies with him as director, War Horse which was nominated for Best Picture and The Adventures of Tintin which was critically and commercially successful. I’ve not yet had the chance to view War Horse but I can say that after watching Tintin, it’s more like an animated version of the Indiana Jones films. With the proliferation of computer-animated films becoming more and more mainstream, what would make this one stand out over the rest? Yes, it’s true that Spielberg has wanted to make this movie for quite some time and even a live-action version. But he “waited” to make it the right way using computer animation. Was it a wise choice or not?

Tintin (voiced by Jamie Bell) is a collector. At a local market he purchases a model ship, The Unicorn, for a steal. But there’s more to this ship than meets the eye. It’s not long before Tintin and his faithful companion, Snowy, are in the midst of danger. Another collector, Mr. Sakharine (voiced by Daniel Craig) seems a bit too interested in this boat and clearly it’s not for sale. As we might have guessed, the boat is stolen and Tintin narrowly escapes death while trying to figure out what’s going on. Ending up on an old cargo ship, they meet up with Capt. Haddock (voiced by Andy Serkis), an old sea salt with a passion for the drink. Combining their talents, the trio are now off to solve the mystery of the ship(s) and what the appeal is.

Fans of the Indiana Jones movies will be right at home here as this is a child-friendly version of those films. Car chases, fights and stunts abound leading our hero through some pretty dicey situations. I’d heard a lot about this film and I always try to keep an open mind when watching something new or a bit out of my comfort zone. Thankfully Spielberg has crafted something that’s equally entertaining for both the adults and kids. I will say that I think the PG rating is a bit misguided. There are some fairly graphic scenes throughout and let it be said that Capt. Haddock’s drinking plays a prominent role in the film. Still, I don’t think too many of the young ones will pick up on the adult themes as this is certainly fun for the whole family.

I know it might seem that any computer-animated film reviewed here gets an automatic 5 star rating, but that’s not the case. Truth be told, I’m really hard-pressed to find any fault with the way these films look on my setup. I look at this film or a Pixar movie and am simply blown away by how realistic and lifelike they look. There are several scenes in the film that, if paused, would look like they were taken straight out of a live-action movie. Yes, that’s how good it looks. The 2.40:1 AVC HD image is exactly what we’d expect and I was really impressed by how lifelike the characters looked. Granted this was done by motion capture as opposed to “traditional” computer animation, but suffice it to say that the result is more than impressive. I could go on and on, but I’ll say that no matter how you watch this film, you’ll be more than satisfied with how it looks on screen.

Equally as impressive as the way this looks is the very robust DTS HD Master Audio soundtrack. You want something to shake the room? This is it. Vocals are crisp and robust with surrounds almost constantly humming along. The LFE have their fare share of face time as well as they continue to hammer away at the low end of the sound spectrum. This is an action movie, no doubt about it, there’s motorcycle chases, fist fights, battles at sea and everything in between. And, as per usual, John William’s original score is the icing on the proverbial cake. On a technical level, this more than delivers – it nearly sets a new standard.

The Adventures of Tintin is available in a few different formats, this is the two-disc Blu-ray edition, though a 3D version does exist. Spielberg is infamous for his lack of commentaries and this is no exception. We start off with “Toasting Tintin: Part 1” as the cast and crew start off on this journey that’s now over three years old. “The Journey to Tintin” features Spielberg and his exposure to the Tintin character, which is what got his wheels turning to make the film. “The World of Tintin” takes a look at the history of the character, the comics and the characters contained within. Having never read the comic, I don’t know how much was altered, but I’m sure some creative liberties were taken. “The Who’s Who of Tintin” takes a look at the actual actors involved with the film and those from the comic. “Tintin: Conceptual Design” shows the crew as they design the film and have the arduous task of turning a comic book into a film. I don’t think anyone envies them. “Tintin: In the Volume” is a rather interesting segment in which we see the 3D box where the humans did their motion capture work. “Snowy: From Beginning to End” takes a look at Tintin’s sidekick and how they adapted the dog for the film. “Animating Tintin” shows the post-production of actually animating the film after the performances were captured. Again, I don’t envy these guys. “Tintin: The Score” is a look at John Williams’ work, his umpteenth collaboration with Spielberg, and the work done on the film. “Collecting Tintin” looks at the figurines and finally “Toasting Tintin: Part 2” (there had to be a part 2, of course) as the film is finally completed on Sept. 15, 2011. A variety of other formats are available in this set with a digital copy, a UV digital copy and a standard DVD to boot. The disc is also BD-Live enabled.
See an exclusive clip from The Adventures of Tintin! 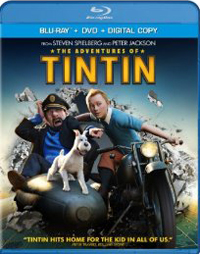