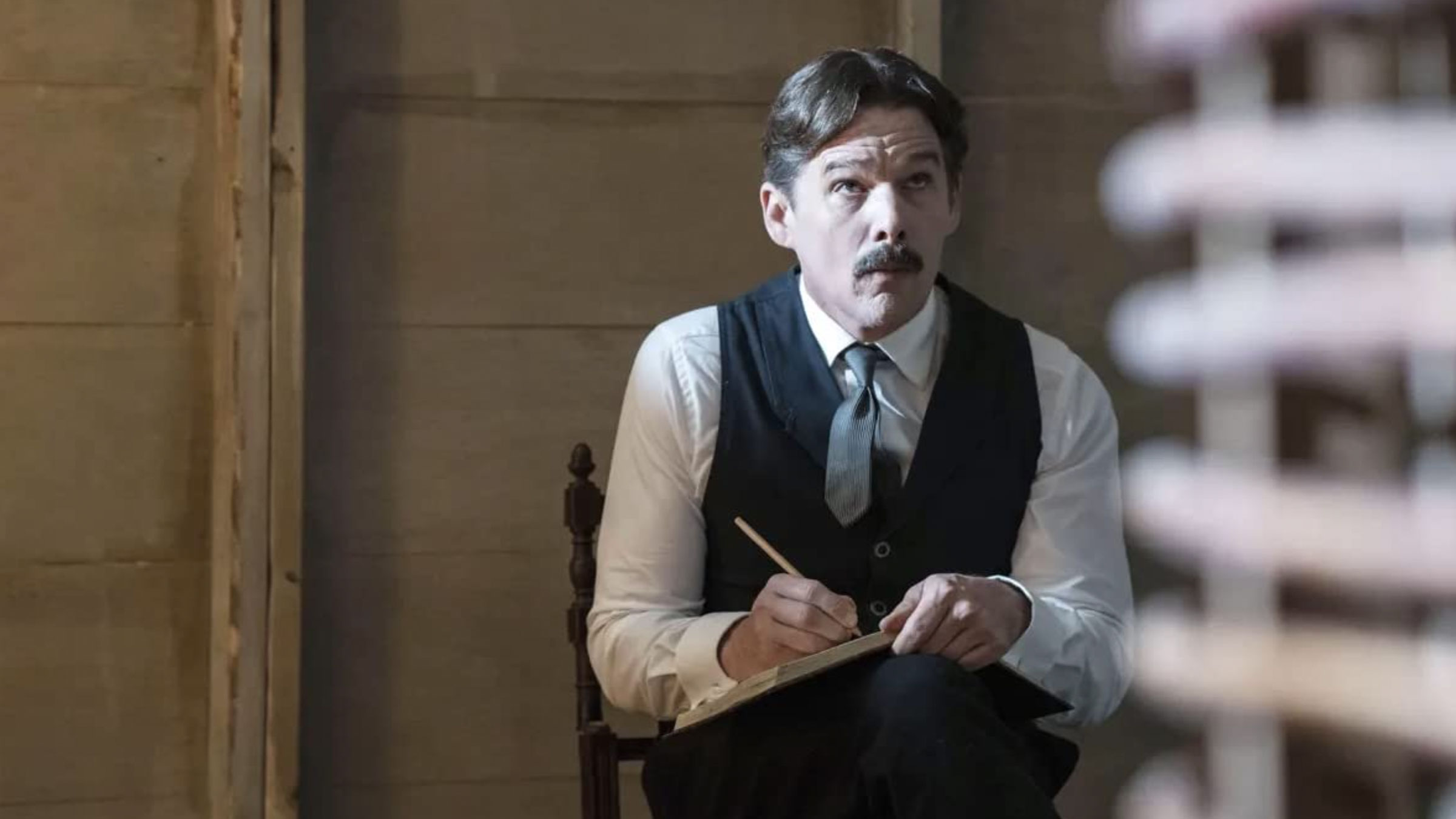 I’ve said it before and I’ll say it again – I think that Ethan Hawke might be my favorite working actor. He’s a few years older than I, but in a way I feel that I’ve “grown up” with him on screen. I was the same age with his “grunge” phase in films like Reality Bites and Before Sunrise. All the time Boyhood was being filmed, I was a stepfather. Granted the parallels end there, but I find his talent satisfying to watch. Hawke, the boy who once starred with River Phoenix in 1985’s Explorers, is now over 50 years old and, as such, is most likely entering a new phase in his life. I’ve found the life of Nikola Tesla very interesting, so it was with baited breath that I popped the disc in and saw one of my favorite actors tackle this role.

Hawke plays the titular role of Nikola Tesla as we meet him working with Thomas Edison (Kyle MacLachlan), then leaving in a dispute. Tesla ends up teaming with George Westinghouse (Jim Gaffigan) to develop his alternating-current electricity (that’s the “AC” of “ACDC”, “DC” being direct current). He also becomes involved with Sarah Bernhards (Rebecca Dayan) as he continues to find new uses for his design and, most notably, the Tesla coil. The main point of the film, though, is the rivalry between Tesla and Edison. The backdrop of Anne is there as well, but serves (to me, at least) as more of a distraction.

I didn’t and have no intent to fact check this story. I feel it’s pretty well-documented with the whole Edison/Tesla thing. But, looking back on the film, I found it enjoyable but nothing I’d watch time and again. Hawke and MacLachlan both do well in their respective roles and Hawke wisely downplays his character. I’m reminded of David Bowie portraying Tesla in Christopher Nolan’s The Prestige. How do you live up to that? At the end of the day, it’s a good movie that’s suitable for a viewing, but I feel it ultimately feel a bit flat. That’s the problem when expectations are so high.

I’ve become so accustomed to seeing films in a wider scope that it’s only when I watch a movie in a more narrow aspect ratio (1.85:1 in this case) that I feel I truly appreciate my HDTV. That said, Tesla comes to Blu-ray and shines. The overall presentation is sharp, crystal clear and vivid. It’s not the brightest or most colorful film (the cover art is a bit misleading), but there are some shots that really make it pop. Flesh tones are warm and natural and black levels have only the slightest hint of imperfection. Don’t let that sway you, though. Overall it’s a nice-looking film that’s sure to please.

With the content of the film, we might expect something that’d blow the roof off the place, right? Nope. Only kidding. Tesla is about as dialogue-driven film as one can imagine and that’s not meant to be derogatory. The DTS HD Master Audio mix has a few moments that made me take notice, but they’re pretty few and far between. Vocals are, as expected, strong and rich with no distortion heard. It’s a fairly straightforward mix that doesn’t disappoint.

Fans of Ethan Hawke will be right at home here and I found this a pretty interesting watch. Shout’s Blu-ray looks and sounds good, though it’s a shame there weren’t more supplements included.