About three years ago I, like everyone else, was “formally” introduced to the talents of Melissa McCarthy in the movie Bridesmaids. Despite all the comedic talent in that film, I think we can all agree that it was McCarthy and her antics that stole the show and, in no small part, led to its success. McCarthy’s stature and comedic style are, to me, reminiscent of the late Chris Farley and part of what made him a star back in the 90’s. No doubt audiences were clamoring for more of McCarthy and they got it…sort of. She went onto star in Mike & Molly on television, but still managed to star in a few other films, namely Identity Thief with Jason Bateman and The Heat with Sandra Bullock. Physical comedy is hard and I’m sure that Bridesmaids set the bar pretty high for McCarthy. With Tammy, her entry in the 2014 Summer movie season, the reviews were overwhelmingly negative, though the film managed to gross $80 million at the box office (four times that of its budge). We’ve seen McCarthy with her co-stars, but this one is pretty much just her – is it worth seeing?

After losing her job and finding out that her husband is cheating on her, Tammy (Melissa McCarthy) has had better days. Taking her possessions and heading two doors down to her mother’s (Allison Janney), she’s set to flee town and start life anew. However this time she needs a car and some money, both of which her grandmother Pearl (Susan Sarandon) has in spades. With grandma in tow, the two set out to Niagara Falls, but both get drunk and end up in Missouri instead (they started in Illinois). Meeting up with some locals at a bar, Bobby (Mark Duplass) and his father Earl (Gary Cole), they form an unlikely friendship though Tammy finds herself babysitting her grandmother more often than not. After a few more shenanigans they find themselves in the care of Pearl’s cousin Lenore (Kathy Bates) and her lover Suzanne (Sandra Oh). Now on the run from the law, Pearl and Tammy are looking to put the past behind them and get back to a seemingly normal life, but…will that happen?

Certainly there’s no shortage of acting talent in the film, with two Academy Award winners in the mix (Susan Sarandon for Dead Man Walking and Kathy Bates for Misery). Some comedic legends with Gary Cole and Dan Aykroyd and some other familiar faces – it’s a veritable who’s who. As mentioned earlier, Tammy was panned by critics, but what do they really know?  I found some genuinely funny moments in the movie, but there are an equal amount of dramatic scenes that give the film an uneven balance. Is it funny? Yes it is. I have to agree that I did prefer McCarthy in The Heat and Bridesmaids and though I do find her amusing, she does need to diversify a bit.  On the whole, Tammy manages to entertain but I’m not so sure if this is one I’ll break out and watch year after year. There are some good performances throughout, though some of the bigger names are kind of lost in the shuffle. It’s worth a rental, though I’d tread carefully before making a blind buy.

Warner presents Tammy in a 1.85:1 AVC HD image that looks good, though I was surprised to see several scenes that were plagued with grain. This isn’t something that was so terribly distracting that it took my focus off the movie, but for a new to Blu-ray film from a major studio I was a bit shocked. Detail, as expected, is crystal clear (we can see Tammy’s lowlights in the utmost clarity) and colors are bright, bold and vidid. Save for those outdoor scenes with the grain, it’s a good effort and if the movie were, say, a decade old I’d look past this. Still, it’s a good transfer that should please viewers.

Comedies aren’t really known for their soundtracks and Tammy is no exception.  The DTS HD Master Audio mix has a few moments that show off the capability, but those are few and far between. I can only think of two instances in which the soundtrack really took control, when the car is burned and when the jet ski is the victim of the “Viking Funeral.” Vocals are sharp and crisp lacking any distortion and the front channels handle the mix with relative ease. Directional effects are varied, but again I wasn’t really expecting this mix to shake the room.

There might be several bullet points below, but there’s not much of substance to those points.

Wave-O-Rama – An extended wave runner scene with more antics on the water.

Mindless Chat-O-Rama – You guessed it… 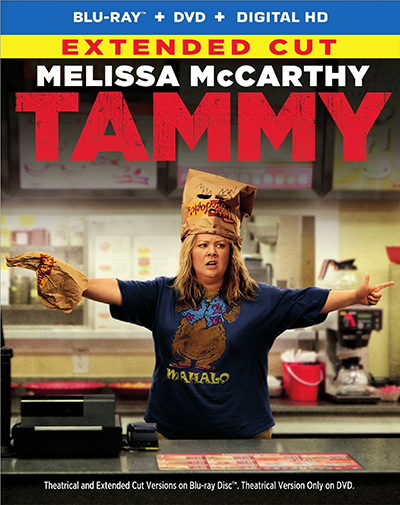