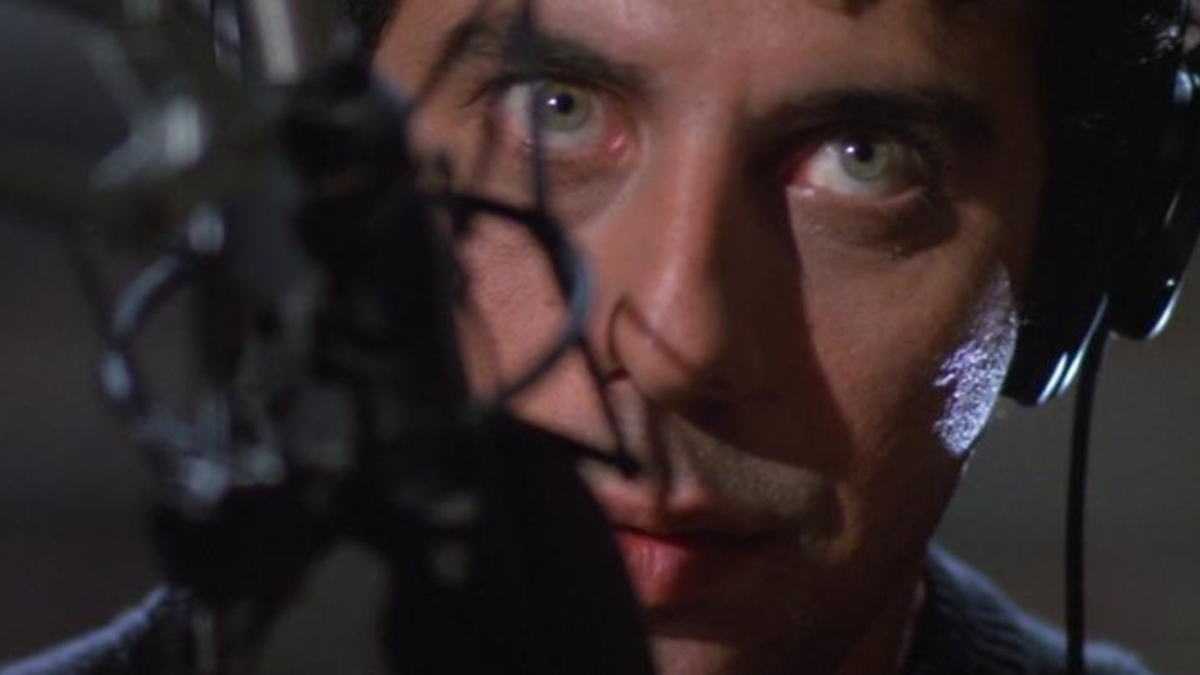 Oliver Stone has always courted controversy with his films. Over the years he has amassed as many fans as naysayers. I personally count myself as a fan. Twilight Time obviously shares my sentiment for his films, having released four releases from Stallone’s career thus far. Without their efforts it is unlikely that Stone’s lesser known films Heaven and Earth, U-Turn, and Salvador would have a home on Blu-ray. I was excited when I saw that Talk Radio was finally getting a proper release by Twilight Time. I remember that Talk Radio played on the Bravo network occasionally when I was growing up. Like most movies back then, I watched as much as I could but I was interrupted before the film ended because it was dinner time. I never planned far enough ahead to record anything, so I remember watching Talk Radio but never saw the ending. I was excited to wrap things up twenty years after the fact.

Eric Bogosian plays Dallas area shock jock Barry Champlain. As the film begins, Barry performs his nightly duty of mocking his listeners. His show is largely popular because he is such a contrarian. His talk show begins late at night and takes live phone calls. He brashly deals with regular folks that enjoy his antics while at the same time dealing with psychopathic Neo-Nazis, potential rapists, and drugged out teenagers. Because Barry also happens to be Jewish, the calls can escalate quickly when he disagrees with the racist philosophies that he allows to be discussed live over the airwaves. It is a dangerous game that Barry is playing and his life is similarly in a flux. Barry lost the affection of his wife when she caught him cheating. Barry is currently dating his producer, but he still has feelings for his ex-wife. On the Friday night broadcast he receives news from his boss (Alec Baldwin) that the show will go national on Monday. This is exciting but also worrisome. He feels caged in when trying to appeal to others. In turn, he acts out even more brazenly. The film takes place over a few days as Barry tries to prepare to go national while having difficulties in his relationships and while receiving numerous death threats via mail and on the air.

Talk Radio is a hard film to judge. The lead character is obnoxious and it is hard to spend so much time in his head. Then again, that is completely intentional. Based on Eric Bogosian’s one act play and slightly based on Talked to Death: The Life and Murder of Alan Berg, the film attempts to firmly root the viewer in the somewhat pathetic realm of a shock jock. This is Bogosian and Stone’s platform to fully make the viewer feel uncomfortable by braving every possible topic. Sometimes the vignettes are funny, sometimes they are political, and sometimes they are petty and over-indulgent. The film and main character make no apology for saying things that irritate as often as they hit the mark.

As Stone mentions in the excellent accompanying piece, one of the most impressive aspects about Talk Radio is that the filmmakers largely keep the film interesting even though almost all of the film takes place within the radio station and with the main character talking for almost the whole film. This is also one of the biggest weaknesses of the film. The film feels weighed down by having so much talk. It wears down the viewer to the point that when the credits roll, they can not help but be thankful that the film has finished. The film could have benefitted from a slight trim. This is probably why the reviews of the film were mixed at the time of its release.

On the other hand, this film still feels prescient. Watching it thirty one years after its release, the issues have not changed that much. Racism and hatred plague the news today just as much as in 1988, if not more so. While the film is a product of its time, its type of cynicism does not go out of fashion. During certain scenes the film achieves a great manic energy and a sustained attack where the punches land correctly. In other scenes the main character lashes out blindly and it draws pity from the viewer that the main character would entertain such bizarre ideas. Hats off to Eric Bogosian for writing and starring in the film and hats off to Oliver Stone for sticking with his man and keeping Bogosian as the lead. His performance is solid (even with a couple miscues where he does not feel like a “movie star.”) Alec Baldwin is great in a minor role- easily stealing every scene he enters. John C. McGinley and Leslie Hope also do well with the parts they were given.

Overall, this is a film that I enjoyed despite a few minor gripes. The biggest hurdle is that the film feels like it was stretched just a little longer than it should have ran. The reviews were mixed for the film due to the issues I mentioned. This is one that I would recommend renting before a purchase, but fans of Oliver Stone’s work should enjoy it and will be glad to add it to their collection.

Twilight Time have provided a transfer in 1080p in the original aspect ratio of 1.85:1. As has become their standard, Twilight Time have sourced the best available transfer of the film. This film’s image is not quite as cleaned up as I had hoped. The image is fairly grainy and it did not seem like the print had been given a lot of attention. This film is not beautiful to look at, nor is it ugly. Adjust your expectations because the Blu-Ray does not perform any miracles here. It is still nice to see the film in high definition and looks better than the DVD ever looked.

Twilight Time have provided a very competent DTS-HD MA 2.0 track. I never had any trouble understanding anything that was said by the principal characters. The film uses sound in some interesting ways which heighten the tension of the picture. While this picture is basically dialogue driven, the subtle ways that Stone chose to amplify certain actions from the main character while on air are really clever. This track represents the original sound of the film without any issues.

Talk Radio is too chatty and the main character is just a little too unlovable for it to bear numerous viewings. That said, the film shows how much Stone can do with camera movements in an enclosed setting with a single character speaking for most of the film. It is impressive that the film feels entertaining at all. While I feel like the movie would have benefitted from a little less screen time, I was glad to watch it. The issues in the film have not changed very much. Hatred and racism have not magically disappeared in the last thirty one years and that leaves the film feeling as if it could have been filmed yesterday (aside from the clothes, the hair, and the furniture.) Talk Radio is a solid entry in Oliver Stone’s career that will probably not change the minds of the fans who love him and the haters who dislike him. For those who have never seen the film and are on the fence, a rental might be appropriate before a purchase. Fans of the film will definitely enjoy the half hour interview with Oliver Stone regarding his thoughts on the film. Overall, I enjoyed getting to watch the film and I am thankful to round out my Oliver Stone film collection. It definitely felt incomplete without this film in it. Thanks to Twilight Time for releasing it!