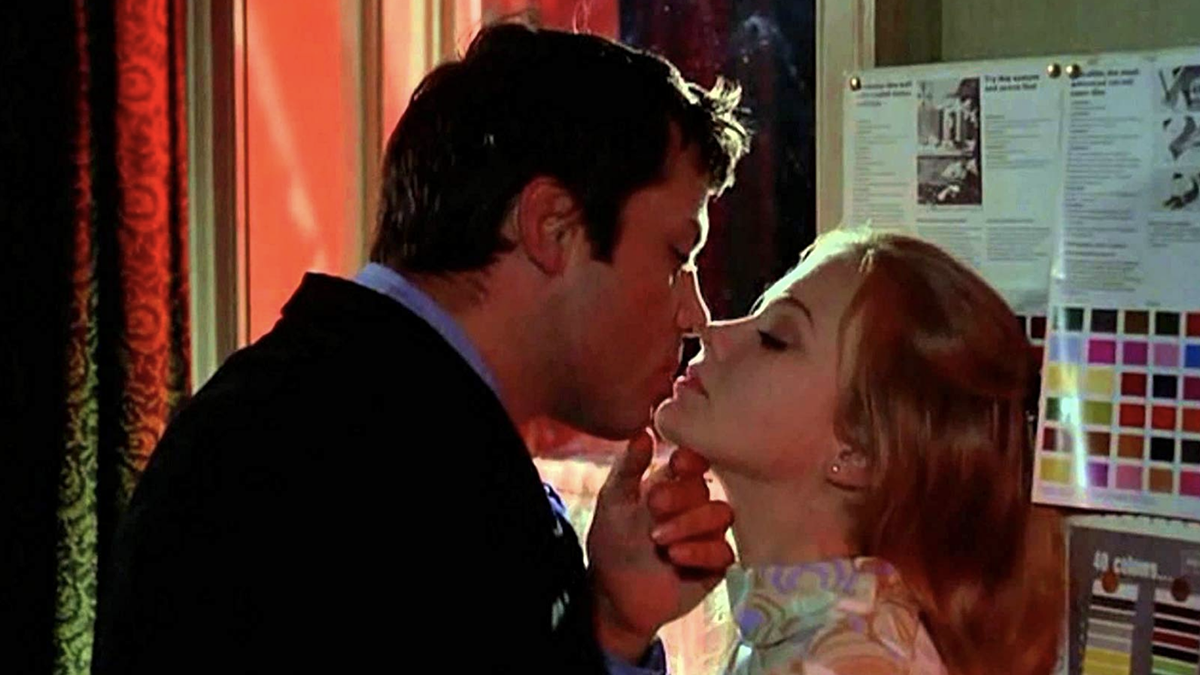 Twilight Time always does a great job of shining light on films that I would not have discovered otherwise. They get some high-profile releases that I would have purchased regardless (The Last Detail, Bring Me The Head of Alfredo Garcia, to name a couple) but one of the things that makes the label such a treat is their commitment to bringing unheralded gems to Blu-ray. One such film is their recent release of Take A Girl Like You, a British sex-comedy(?) from 1970 starring Hayley Mills and Oliver Reed.

This is one of the most confusing films I have seen in a long time. The plot of the film revolves around young school teacher Jenny Bunn (Hayley Mills). She heads south of London to pursue her teaching career. Upon checking into her boarding house, she meets Anna and Anna’s sometimes lover Patrick (Oliver Reed.) She also meets her landlords: a laughable socialist politician named Dick Thompson (John Bird) and his wife Martha. Patrick is immediately infatuated with Jenny and succeeds in getting a date with her. After a date they go to Patrick’s place for “coffee” where he quickly discovers she is a virgin. Patrick makes it his goal in life to deflower Jenny, but his intentions are constantly foiled by his inability to turn down affections of other women. Patrick makes the acquaintance of a playboy millionaire named Julien Ormerod (Noel Harrison,) who also takes an interest in Jenny. Meanwhile, Jenny tries her very best to navigate dating while maintaining her virginity.

Well, not sure what to make of this movie. While the film is a comedy for the most part it has a distinctly predatory vibe. Poor Jenny cannot seem to go anywhere without some jackass trying to get her drunk, so he can try to take the virginity. Her landlord attempts to rape her in another strange scene and then is disliked by the landlord’s wife for nearly being raped. Oliver Reed’s character consistently begs her for sex from the beginning of the film. I know that the movie is meant to be somewhere between a comedy and a drama, but this film was just really bizarre to watch almost fifty years later with how much things have changed.

The acting in the film is pretty solid. I enjoyed the performances from the major three characters, but Hayley Mills steals the movie. She is very convincing in her role and proves here that she could act outside of the Disney films with ease. Oliver Reed is an interesting choice to play such an irresistible stud, but I found his performance consistently engaging and at times very funny.

The weird part about this film is that I could relate to Jenny’s character. I remember holding onto my virginity in my youth and how it wasn’t as easy to navigate that as one might think. I also could relate to Oliver Reed’s character from the lonelier times that I occasionally felt in my college years (although I was much more monogamous.)

Overall, this is a really perplexing film due to an ending that is sure to leave the audience’s scratching their heads as to what the hell they had just watched. This somewhat downtempo film has a strangely upbeat soundtrack featuring songs by The Foundations that are sure to make them scratch their heads again. I would recommend a rental prior to a purchase, but if you watch the film please tell me your thoughts. Overall, the more I have thought about the film, the more I like it but that may just be because very few films throw me for a loop like this one did.

Columbia Pictures (via Sony) have provided a transfer in 1080p in the original aspect ratio of 1.85:1. This transfer looks pretty darn good. This film has all of the colors that you would expect from the late Sixties or early Seventies. While nit as stylish as films like Two for the Road, the film still has a good look. Fans of the film will be pleased to see that the normal care put into Columbia’s catalog has been shown here and the film looks very nice.

“Take a Girl Like You” is sung by the Foundations at the beginning of the film. That strangely upbeat song sets the pace for the soundtrack of the film. Twilight Time have provided a very competent DTS-HD MA 1.0 Mono track. I never had any trouble understanding anything that was said by the principal characters. I really enjoyed the whimsical score by Stanley Myers and there are no problems whatsoever to report with the audio on the release.

Take a Girl Like You is one heck of a perplexing film. Overall, I cannot say what the film accomplishes. It made me feel very uncomfortable at times like almost nothing else I have seen recently. Then again, the performances by Hayley Mills and Oliver Reed are enjoyable to watch. I don’t really know what I think about this one, but it left me scratching my head so much that I must give it a little credit. My recommendation would be to rent the film prior to a purchase. For fans of the film, Twilight Time have provided a great looking and sounding transfer.