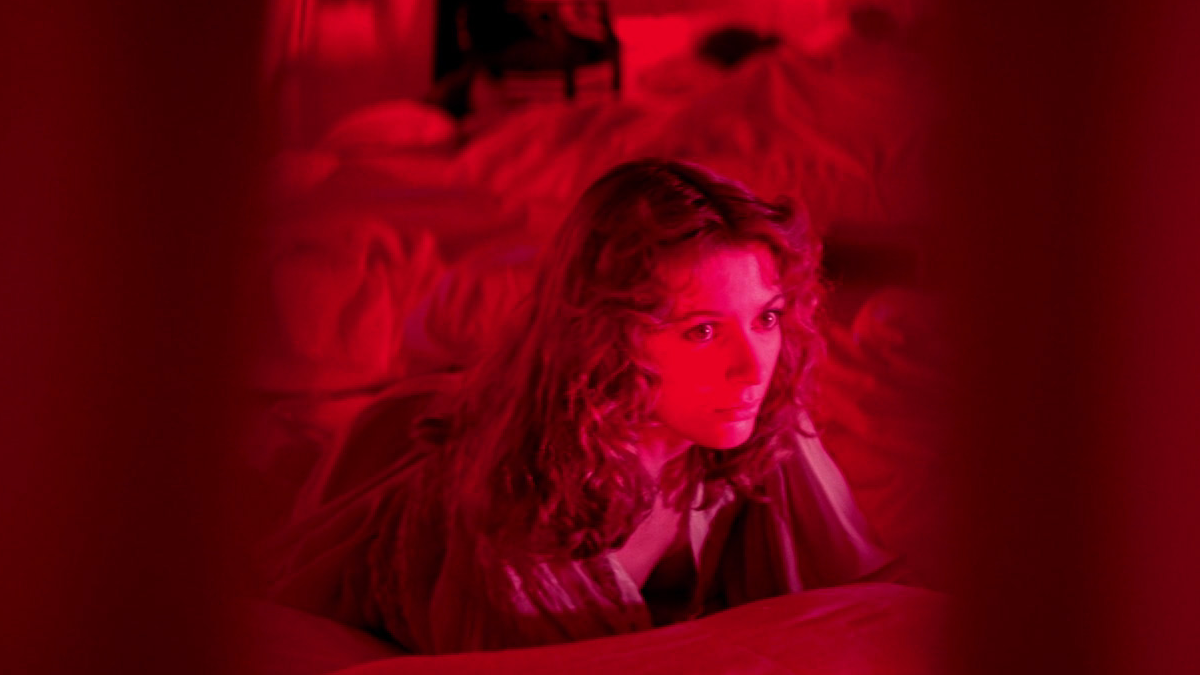 I was a twenty-two-year-old college kid when I walked into Vinyl Fever in Tallahassee, Florida to grab some CDs and DVDs when a film struck my eyes. It was just mixed in with every other DVD and it cost me about seven or eight bucks. The film was called Suspiria. I had heard of it on some of those horror film countdown shows, and the price seemed right. I went back to my apartment and a friend of mine came over and we popped it in. It blew both of our minds over the course of 98 minutes.

The plot of the film revolves around ballerina Suzy Bannion (Jessica Harper.) the introduction to the film tells us that ballerina Suzy Bannion has been accepted to a prestigious dance studio in Germany. Given the great opportunity she accepts the invitation and flies to Germany. The film begins with Suzy arriving at the airport and taking a ride through the dark woods to the academy in driving rain. She keeps the cab there while she approaches the door to the studio. Upon arrival at the gigantic red mansion where the studio exists, she sees a blonde young woman fling open the door and yell a couple sentences at her, before running off into the woods. Suzy calls on the intercom to let her arrival be known, and is turned away. Confused, Suzy hops back into the cab and drives off. Out the window she can see the young woman running through the woods as if something is chasing her. The young blonde woman makes it to town and is let into a beautiful and strange residence. The ancient evil that she has feared is still stalking her, and her bizarre murder occurs (in one of the most famous Giallo scenes of all time.) Suzy returns to the dance studio, and grows suspicious of her surroundings as horrible things continue to plague the studio.

Suspiria is a film that I had looked online for a high definition copy ever since I first purchased a Blu-ray player. When I saw that Synapse film was releasing a new 4K restoration of the film on a limited edition steelbook along with a remastered soundtrack by Goblin, I purchased it immediately for the full asking price of 49.99. I didn’t think twice about it. Suspiria is rightfully considered Dario Argento‘s best film and is also considered to be the best supernatural Giallo film. This also makes it one of the greatest horror films ever made. So why all the fuss? Why should you spend $49.99 in an Italian Giallo film from 1977?

The answer is that Argento was to horror what Kubrick was to Sci-Fi. As I recently watched the film with my best friend, we talked about how the film is visually just as compelling as some of Kubrick’s best work. Make no mistakes about it, this film is a work of art. Working closely with cinematographer Luciano Tovoli (who had recently worked on Antonioni’s The Passenger) Argento set about making the most colorful horror film ever made at that time. The film has incredible set design that drapes the movie in pinks, reds, velvety blues. He uses strange lighting to cast the film in heavy blues, reds, yellows, and greens. It is a virtuosic display that has been emulated by other directors, but in my humble opinion, never equaled. Once you get past the drastic color choices you will note the eye for architectural detail that is very reminiscent of an Antonioni film. Then there is the music. One of the greatest (and most influential) scores ever made, Goblin (under the supervision of Argento himself) recorded a sweeping synth-lead loud drum-heavy moaning score that envelopes the whole film and then this beautiful theme that sounds like it is being played on a music box. It is absolutely amazing. This film’s score has been a major influence on what we see today and helped to influence John Carpenter in his theme for the film Halloween. Goblin would go on to do the score for another fantastic horror film, Dawn of the Dead.

The film is mysterious, a bit ridiculous, gory, beautiful, frightening, and something to behold. This is my personal favorite Dario Argento film and one of my favorite films ever made. That said, it is brutal as hell… so if you are not going to be okay with some extreme violence, this movie will probably not resonate with you the same way it did with me. This film introduced me to the Giallo genre and Argento’s work, and I am so glad to finally own it in one of the most amazing 4K transfers of this year. This is easily one of the best releases this year.

This new transfer in 4K from the original uncut Italian 35mm camera negative by Synapse Video uses an MPEG-4 AVC encoding of the film in 2.35:1. Supervised by director of photography Luciano Tovoli, this is probably my favorite 4K restoration I have seen this year. This is a stunningly detailed restoration. Clarity and depth of field are unmatched. All of Argento’s strange fish eyed angles hold up. All of the beautiful blues, greens, pinks, reds, yellows, velvety blues look absolutely the best they have ever looked. This is something that was meant for this substantial of an upgrade. This is one of the few times where I can say that the end product was definitely worth the wait…. and the wait was painful. Fans are going to lose their minds when they see this. It is absolutely impeccable.

Synapse Video have provided a few options – the first is the original LCRS sound mix in English DTS-HD MA 4.0 based off of the original recordings not heard since the theatrical release in 1977. This setup may sound strange, but it actually sounds phenomenal. The soundtrack by Goblin has been given the full treatment and immersion is fantastic. Every time you hear the whispers and Argento scream “Witch!”it is effective and wonderful. This is the way the film was meant to be heard. It’s a revelation. It sounds much better than the Italian DTS-HD MA 5.1 track which does not sound nearly as good. My recommendation – stick to the English and the presentation is the best it has ever been.

Suspiria is not just a horror film, it is an important work of art that has influenced countless directors, writers, musicians, and authors. It uses a simple fairy-tale style framework to make one of the most beautiful and bonkers horror films ever made. This is one of my favorite releases that has come out this year, and if you can stomach the graphic violence, I highly recommend adding this to your collection. This new 4K transfer of the film is jaw-dropping. I can’t wait to watch this one again and introduce it to somebody who has never seen it. Highly, highly recommended.