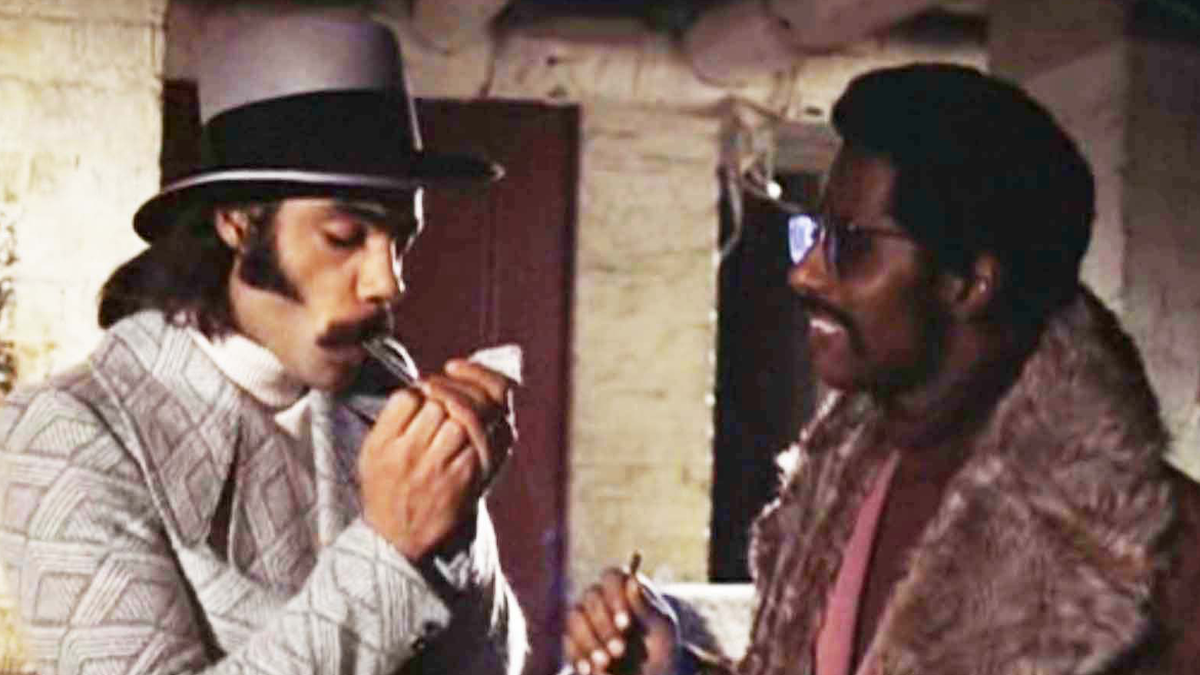 Warner Archive Collection continues its series of releases from its tremendous back catalogue with one of their most exciting titles of the year Super Fly. This is great news on a couple fronts. First, this is one of the major films of the Blaxploitation craze of the early Seventies and one of the most deserving of an upgrade in sound and image quality. Second, if this release is a success hopefully we will see more titles like this released in the near future. Warner has the rights to so many films so a title like this gets me excited to see what they will release in the future. Now that we have moved away from the importance of the release itself, let’s discuss the actual film.

Super Fly follows Youngblood Priest (Ron O’Neal,) a cocaine dealer that wants to get out of the life. His plan is to go to a friend named Scatter and purchase 30 kilos and make a million dollars over the course of four months for himself and his partner Eddie. With one big score he can leave the life behind, but his plan is fraught with danger in the form of crooked cops and the possibility of betrayal from his associates.

Super Fly came on the heels of Shaft, one year after that film had proved that there was not just a desire but a need for more African American heroes on the big screen, more African American narratives that had their own distinct voice. Shaft and Sweet Sweetback’s Baadassss Song had proved that these films could be made inexpensively and perform incredibly well at the box office. The Vietnam War was raging and African Americans were being drafted to fight an enemy on a different continent. The Black Power movement and Black Panthers were in the spotlight. At the same time, cocaine and heroin began to affect the urban cities. Crime was increasing at a remarkable clip.

Super Fly gives a protagonist for those troubled times. The first time we see Youngblood he is in a bed with a naked white woman snorting coke. Its a strong first image and establishes off the back that this film is about power. Youngblood Priest is a hustler. He’s a cocaine dealer and a sometime pimp. He has clawed his way out of poverty through means of distributing white powder and the only way he can figure to break the cycle is to make enough money to leave his world behind completely. His worries were many of the worries of impoverished Americans and still are the same worries. Without job experience and college education there are not a lot of prospects. For Youngblood, money is a way to stop the cycle and change the way he lives. He wants out and drugs is the only way he sees out.

This is a cynical hero for a cynical era and given the fact that this film is being rebooted this year, some things still remain true today. The world has changed in many ways but it is still hard to break free of the chains of poverty that bind so many Americans. This movie has reached classic status for many reasons, but one of the main reasons is that the film’s story holds up. People still deal drugs and people still want a better life. The story itself is essentially timeless: the bad guy trying to go straight with one final job. See films like Kubrick’s The Killing or Michael Mann’s Heat for further reference. This is essentially the crime story we all know and love with an African American facelift that makes it interesting and appealing.

The acting in the film is very appealing. Ron O’Neal is cool as hell in the film, soft spoken and menacing. From the first time he steps onto the screen with that hair and that mustache, you can’t help but root for the bad guy. Carl Lee is also fun to watch on screen as Eddie. The supporting cast is rounded out by bit players like Sheila Frazier and Julius Harris who all do a decent job. The direction by Gordon Parks, Jr. Was widely criticized for falling short of his father Gordon Parks’ directorial work on Shaft. I think that while the performances he gathers are a bit hamfisted, he injects plenty of style that makes up for any small shortcomings. One scene in particular that shows the ways in which the cocaine is distributed by using still photographs has been imitated a million times since in films like Blow to great effect. Overall, while the film was obviously shot on a small budget with fairly unknown actors, it succeeds in creating a mood taht sustains the whole film. Much of that can be attributed to the fantastic score by Curtis Mayfield which was nominated for a Grammy. The jazz and funk infused score is just plain great, up there with some of the best I have heard.

One of the best lines in the film comes when Eddie says, “You’re gonna give all this up? Eight track stereo, color TV in every room, and you snort a half a piece of dope every day. That’s the American dream, n***a. Well, ain’t it?”

This is a crime caper that is American as it gets.

Warner did a good job with the transfer of the film. The new 2K transfer is framed in an aspect ratio of 1.78:1 with an MPEG-4 AVC encode. This is one of those cases where the hard work has been done, the film looks the best it has ever looked and probably can not be improved upon by much, but the film itself is not a real stunner on Blu-ray. Super Fly was shot on a very limited budget and it looks like you might expect from an independently financed picture at that time. The image is somewhat soft. Overall, fans will be happy to see the film on Blu-ray, but they should not expect the results to be miraculous.

The very capable DTS-HD Master Audio 2.0 track stays true to the original elements, but also uses a little more directionality than one might expect. Most of the scenes in the film are pretty center heavy, but music has been given a little more depth. The soundtrack by Curtis Mayfield is excellent and has never sounded better. Dialogue is clear for the most part with some parts sounding better than others. There is occasional muffling from the original recording of sound. More solid work by Warner.

Super Fly has attained classic status with good reason. One of the earliest Blaxploitation films, it is also one of the best. While it has some stumbles that tend to come from working on a small budget, the excellent score by Curtis Mayfield and stylish direction by Gordon Parks Jr. sees the film through. Warner needs to continue to release these films as a great time capsule into that time and the issues it faced. I really enjoyed the movie and am glad to have it in my collection.