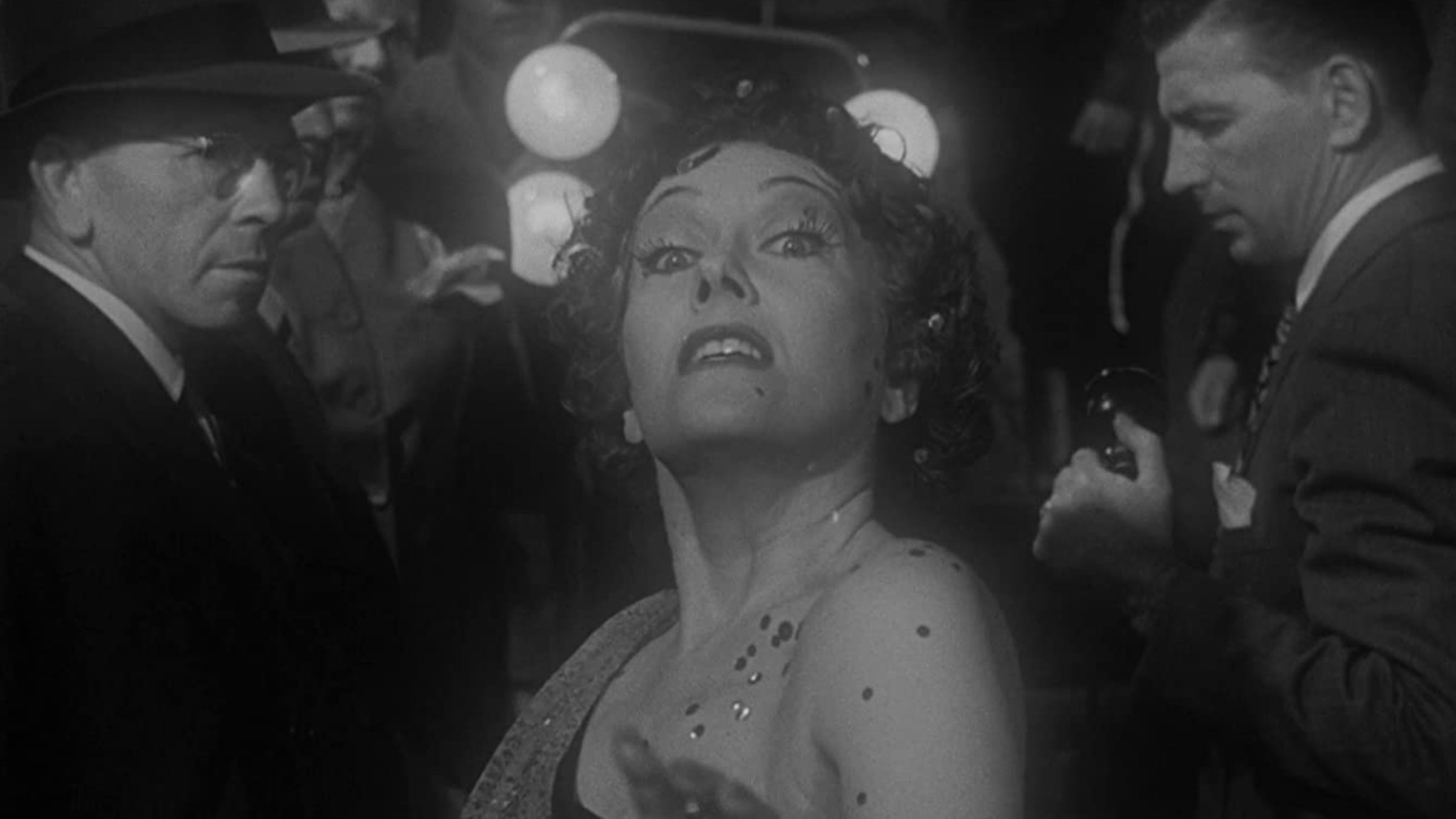 Lines like that can only be associated with one movie…Sunset Boulevard.  Not many films can really hold up to all of the hype and expectations that are associated with them. I’m pleased to say that this not only met my expectations, it exceeded them by leaps and bounds. Forged from the mind of Billy Wilder, Sunset Boulevard is a slap in the face to Hollywood – no wonder it was (and is) so popular! Nominated for Best Picture (it was nominated for ten Academy Awards in all), it lost to another great movie, All About Eve. It is widely accepted that had this movie not been about the business of making movies, it would have won. This shouldn’t take anything away from Eve, as it’s a great movie as well. But perhaps the most intriguing thing about the film is the fact that it uses real characters from “real” life and that it hit so close to home for two of the main stars (Swanson and Von Stroheim). Join me, if you will, for a look inside Sunset Boulevard.

We meet Joe Gillis (William Holden) dead, floating in the middle of a swimming pool. Yet he narrates the movie from beyond the grave. Right away we know we’re in for something special. Gillis is a starving writer who has moved out to Hollywood in search of a new career. Originally from Dayton, Ohio, Gillis has a few “B” movies to his credit, but is still trying to live the dream and make it big. While trying to avoid some men who are after him (to repossess his car), he gets a blow out and ends up off of, coincide dentally enough, Sunset Boulevard. Thinking the huge mansion to be abandoned, he hides his car in the garage in hopes that the men won’t find him or his car. As he wonders into the house, he finds that it is indeed inhabited by none other than Norma Desmond (Gloria Swanson), a former silent film star who now lives as somewhat of a recluse in this huge house. Thinking that Gillis is here to help her with her dear departed friend (a monkey), the two don’t hit it off at first. Finding out that Joe is a screenwriter, she confides in him her script that she’s been working on. She plans her comeback in a remake of Salome. Joe seizes the opportunity to work with her, having nothing of his own. He stays the night only to awaken to his belongings in her house. He’s moved in whether he likes it or not!

Joe becomes a reluctant gigolo, in as many senses of the word. He pretends to refuse her gifts (new suits, gold cigarette cases, etc.) but yet eventually takes them anyway. There’s attraction on both sides, yet Joe longs to be done with his “assignment” and to hopefully get on with his career. On the “outside world”, Joe has tried to pitch a movie entitled “Bases Loaded”, but a reader at Paramount (Nancy Olsen) has dismissed it as “…a rough re-write of something that wasn’t very good to begin with”. As time passes, Joe seems to have gotten accustomed to the lifestyle in which he supposedly hates. And what of the life? He has no real responsibilities except to be there for Norma whenever she needs him. Part of the same resentment that angers him also keeps him in control when he realizes what he has with her. Perhaps the most amazing thing is how art imitates life. Swanson was actually a silent film star that all but disappeared when “talkies” came out. Her butler, Erich Von Stroheim, was married to her in real life and was the director of several of her films. They bombed and she vowed never to work with him again. Additionally, she was a friend of the legendary Cecil B. DeMille and made films with him. DeMille plays a part in the story and it’s a bit awkward for us to see them together.

Gillis manages to get away from time to time, meeting with Betty Schaefer (the reader from Paramount) to help her re-write a story that was done by Joe. Only a few short months earlier, he would have given his soul for a chance like this, but now he tells her that she can have the story and take the credit for writing it. Amazing the changes that have happened. The conflict arises when Betty professes her love for Joe, even though she’s already engaged to someone else (Jack Webb). This chain of events is what sets in motion the ending of the film.

Sunset Boulevard remains a classic for one reason, it’s use of real people and real-life situations. Somehow, we can relate to the movie better when we know the names they use (Cecil B. DeMille, Alan Ladd, etc.) and even a few silent movie stars turn up in Buster Keaton and H.B. Warner (Desmond has them over for a poker game and Joe has decided to call them the “waxworks”). The biting dialogue, the great story and the sheer subject matter are some things that we see often these days, but this was the first to cross that threshold. If you can accept the fact that Norma Desmond is essentially playing herself, and “over the top” is how the role was meant to be played; then you’ll enjoy the film as much as I did. It’s well-known that the movie is great, earning high spots among the American Film Institute’s Top 100 movies of all time and the readers of the Internet Movie Database have placed it in the Top 20 as well. Sunset Boulevard is simply superb and it deserves a spot in every collection. Highly recommended.

It’s now been a decade since Sunset Boulevard was first released on DVD and at the time, it was one of the better-looking catalog titles available.  It was given a meticulous restoration by the same folks who were in charge of North by Northwest,  Citizen Kane and Snow White and the Seven Dwarves.  With its debut on Blu-ray, we’d expect a little more and we get it.  Having said that, Sunset Boulevard has literally never looked better.  Yes, the 1.37:1 full-frame transfer doesn’t fill our HDTV’s, but that’s no fault of the disc.  The gorgeous black and white image looks stellar from beginning to end.  There’s the slightest bit of grain associated with the image, but it does give the image a bit of texture and detail has been improved a bit from the previous DVD.  Black levels look amazing as is contrast.  The overall picture clarity is simply stunning and we’d expect nothing less for one of Hollywood’s greatest films.

Don’t let the label fool you, as the Dolby TrueHD mono track is a lot more robust than one might think.  Granted, the majority of the film is dialogue-driven (Holden’s character narrates it from beyond the grave), but we do get a very strong-sounding track.  Like so many other films of the time, we don’t get that “hiss” that’s so associated with the soundtracks.  The overall soundtrack sounds amazing, considering it’s only coming out of one channel and while there are a few harsh instances, it’s by and large a very strong track.  Certainly it can’t compare to the films of today, but for a movie of this age, I was more than satisfied with the way this sounded.

Good news and bad news here as all of the supplements from the previous two-disc edition have been ported over, and we do get a few “new” features to boot, but nothing really of substance.  Since I covered the features in my original review of the DVD, that’s below, but what’s new is the never before seen deleted scene “The Paramount Don’t Want Me Blues.” Running around 90 seconds, a deleted scene from a movie that’s over 60 years old is certainly a rarity.  The picture quality isn’t quite up to the same standard that the movie is, but it’s still nice to see this included.  Also, the trailer is shown in HD.  The remainder of the supplements remain intact.  First up, we have a feature-length commentary track by Ed Sikov who wrote the book “On Sunset Boulevard: The Life and Times of Billy Wilder”. Sikov knows his stuff here and he’s featured on the other supplements as well. My only complaint with his commentary track is that it sounds like he’s reading it! Yes, really! Don’t get me wrong, it’s informative, well thought out and very perceptive (he’s obviously seen the film countless times), but his dry voice sounds like he’s reading his lines off a piece of paper. Granted, I’ve never been to a commentary track recording, so I don’t know what’s involved, but I found this rather distracting. Next up is “The Making of Sunset Boulevard” which features new interviews with Sikov, Nancy Olsen (who played Betty in the film) and the composer’s son. This might be considered to be your typical featurette, but I was so enthralled with the movie that I was eating up every supplement that I could find. And, I might add, Ms. Olsen looks pretty good for her age! Next up is a Hollywood location map that tells of some of the land marks attached with the movie.