In New Orleans of the 1930s, a young brain surgeon named Dr. Cukrowicz (Montgomery Clift) comes back from Chicago to work at the small hospital that his father runs. The hospital itself is in disrepair and the only chance to give the hospital the proper care it needs would be a large donation. It just so happens that a rich widow named Violet Venable has taken an interest in Dr. Cukrowitz and his experience in the field of lobotomies. Her traveling poet son Sebastian had passed away the year earlier and his death had caused a dramatic effect on her niece Catherine Holly (Elizabeth Taylor.) Catherine has been institutionalized due to her post traumatic depression that is causing her to have violent and sexual urges. Violet holds Catherine responsible for the death of her child and would like nothing more than to have Catherine lobotomized so she can wash away any record of that day the year before. When Violet offers the hospital a million dollars for a new wing, Dr. Cukrowitz has very little time to get to the truth behind Catherine’s mental problems and prevent the the surgery from occurring. This is made even more difficult by the fact that Catherine’s money hungry mother and brother have already been bought off by Violet.

This movie (and the play it is based upon) are considered to be more of a minor work from Tennessee Williams. People have criticized the film for its overly melodramatic nature, and I understand why. The film (like many play adaptations) is heavy on dialogue and characters essentially reveal their intentions in heavy-handed monologues. I did not find this a problem once I got past the first twenty minutes of the film and Katharine Hepburn’s lengthy monologue. Melodrama to a certain extent should be expected when adapting a play due to the constraints of the format and how it is necessary to reveal much through dialogue as opposed to action. This is counterintuitive to filmmaking as playwright David Mamet argued in his book on filmmaking. In films, he argued, you need to show the audience through action as opposed to telling the audience.

The play was capably adapted by Tennessee Williams himself with the assistance of brilliant critic and writer Gore Vidal. Director Joseph Mankiewicz does a solid job of adding good mise-en-scene to the surroundings of the characters and applied good camera work to aid the film. Performances across the board are strong even if there is a little bit of one-upmanship to what is presented.

At the end of the day, this film knows its target audience. It is a rare occasion that you can find a film with this much raw talent: a script penned by Tennessee Williams and Gore Vidal with Elizabeth Taylor, Montgomery Clift, and Katherine Hepburn chewing up the scenery. Go into the film as if you are watching a stage play and there is a lot to enjoy. I especially enjoyed the latter third of the film where the mystery is laid out and everything is made clear.

Twilight Time have yet again proven themselves in the same league as Criterion when it comes to delivering pristine video presentations. This is an outright incredible job on the transfer of the film using an MPEG-4 AVC codec licensed from Sony from the original Columbia Pictures negatives. The black and white cinematography by Jack Hildyard (who had already worked on such classics as The Bridge On The River Kwai and Summertime) is beautifully lit to show the finest detail of the surroundings. As I was watching the movie I was struck by just how crisp the film looked. I kept getting transfixed by the details on the suits worn by Montgomery Clift because I could see the smallest textures of the sewing. Elizabeth Taylor in a white swimsuit has never looked so good!

For a Master Audio 2.0 Mono track, this track is completely true to its source. I feel like I mainly watch films that were made in Mono, so my reviews at time can be a bit repetitive on these facts. Twilight Time only releases films when they feel like the transfer that has been granted to them is of notable quality. Typically, they are receiving the rights to these films once the studio has done a full restoration process for their archives including the sound of the film. This is obviously the case here where there is not any hint of hiss or distortion or any crackles or pops. It is essentially flawless, but will not be of demo quality compared to the full sound field that films are recorded in now.

Suddenly, Last Summer feels like a play, and that is a good or bad thing depending on whom you ask. I personally enjoy this type of film. As can be expected, Montgomery Clift, Katherine Turner, and Elizabeth Taylor are great to watch onscreen. Given the divisive nature of this film (and the play upon which it is based) I may recommend a rental prior to a purchase. For fans of the film, this Twilight Time transfer granted from Sony is technically superb. 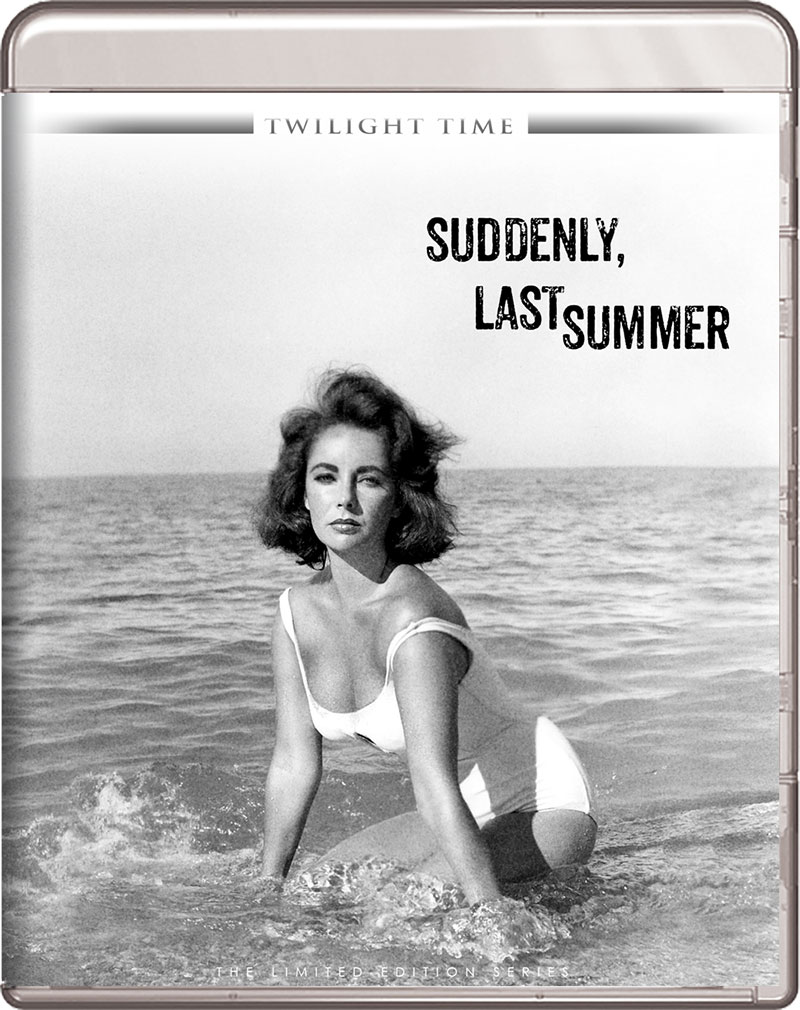