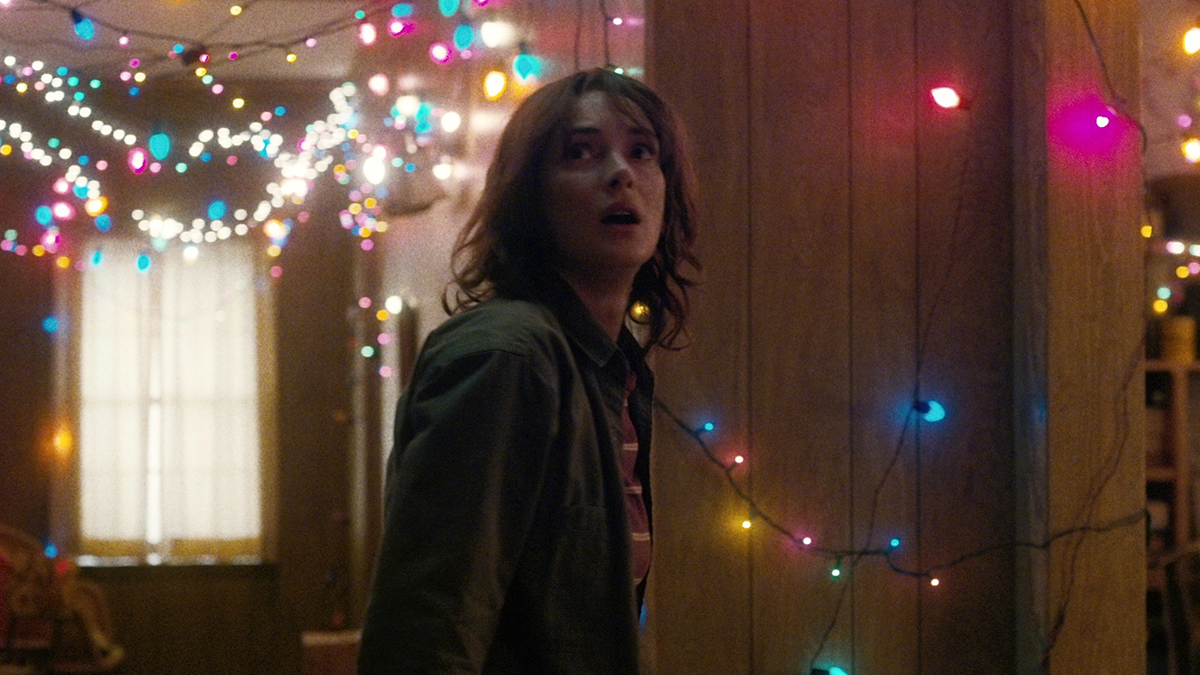 If every filmic archetype of Steven Spielberg and John Carpenter to come out of the 1980’s was run through a blender on puree, the resulting odd and wonderful mixture would probably look quite a bit like Stranger Things. Created by brothers Matt and Ross Duffer, the show’s plot kicks off when 12-year-old Will Byers mysteriously goes missing, leaving his friends Mike (Finn Wolfhard), Dustin (Gaten Matarazzo), and Lucas (Caleb McLaughlin) to find him.  Soon enough, they’re joined in their search by an equally-mysterious young girl named Eleven (Millie Bobby Brown) with a secret past involving a government lab run by Dr. Brenner (Matthew Modine) and some otherworldly powers that begin to come into greater focus through various flashbacks.  Will’s frantic mother Joyce (Winona Ryder) enlists the help of the local Sheriff (David Harbour) to help, while Mike’s older sister Nancy (Natalia Dyer), her boyfriend Steve (Joe Keery), and Will’s brother Jonathan (Charlie Heaton) begin to uncover evidence of a terrible creature that’s begun to manifest in their small suburban town of Hawkins, Indiana – possibly from another, darker dimension.

As you can tell, there’s a LOT going on in Stranger Things.  This show is just one heck of a lot of fun from start to finish.  It’s dark, suspenseful, funny, nostalgic, exciting, and truly takes you back to a time and place in ways that similar experiments such as Super 8 tried so hard to evoke but ultimately failed to deliver.  The casting in this show is something of a minor miracle.  Not a single person seems out of place or forced as a character.  The children are uniformly excellent across the board.  Millie Bobby Brown and Finn Wolfhard give deservedly star-turning performances as Eleven and Mike, and their innocent but budding relationship lends an unexpected gravitas to the proceedings as the show nears its climax.  Even Winona Ryder is genuinely surprising in her role as the maybe-out-of-her-mind parent who just wants her boy back – even if she has to talk to him through Christmas lights.  The callbacks to elements from the films and feelings of Generation X come fast and furious.  From the snowy, barely-in-tune 4:3 television showing a clip of Knight Rider in the next room to the dining room chairs that just so happen to be the same ones you might remember being stacked on the Freeling’s kitchen table in Poltergeist, this show is a blast to experience for the dripping, pitch-perfect nostalgia alone.

It takes a lot to get me to love a show (or a film) these days, but I genuinely love Stranger Things.  I think maybe the reason I do is because it has so clearly been put together with a tremendous amount of loving care and reverence for the types of films that are nearest to my heart.  And yet, that in and of itself wouldn’t be enough.  It also gets those nostalgic elements extremely and undeniably right.  Stranger Things isn’t a show that merely evokes the 80’s with an era-specific TV show or with chairs you once saw in a horror movie.  Those items merely fill in the peripherals of frames that exist to tell a story you’re interested in.  The show isn’t just set in the 80’s.  It feels like the 80’s.  Hawkins isn’t that generic middle-American town we all grew up in – it’s the misremembered idea of that town that you still hold onto.  And while that idea might not reflect the whole reality, it’s actually more real in some ways than that town ever was.  I didn’t have a friend clique growing up like Mike, Dustin, Lucas and Will – but that group still somehow feels similar to how my childhood felt to me, and it makes me wish I’d had something more like it.  Fortunately now, with Stranger Things, a whole lot of us out here are making up for lost time.

I wasn’t sure exactly what to expect from this Stranger Things Blu-ray set – especially since I, like many others, already had access to the series in 4K streaming through Netflix.  Would buying the show in “mere” 1080p quality actually be a step down from how I already had access to it?  Well, as it turns out, absolutely not.  Stranger Things doesn’t just look good on Blu-ray…it looks freaking phenomenal.  While a side-by-side comparison with Netflix’s 4K stream revealed the most extremely minor of upticks in fine object detail in the streaming version (and I do mean under a microscope, folks), this could only be discerned in portions of the frame, and only in extremely bright shots.  When things get even a tad bit darker (which, as fans will know, is the bulk of the show), the 4K stream’s detail collapses due to its inferior compression, and it’s here where the strengths of the Blu-ray shine through with ease.  This is an absolutely jaw-dropping, pristine presentation that takes full advantage of the outer limits of what this format is capable of producing visually.  I’m not exaggerating when I say that it easily bests the 4K version in many areas, and is utterly indistinguishable from it at any normal viewing distance.  And the areas where the Blu-ray does stand out, it does so favorably.  If I could, I could heap accolades on this transfer all day, citing its deep, inky black levels, superior skin tones, clothing and fine thread details on costumes; the list truly goes on and on.  Those concerned about the show being presented on only two discs needn’t worry.  If our video scale went higher than 5, I would give it an even better score.  Blu-ray discs simply don’t get more visually impressive than this.  Until when or if Netflix sees fit to give us a 4K UHD release, this is the best way to watch this series, hands down.  Excellent!

The first thing I wanted to check out when reviewing the Dolby TrueHD track for Stranger Things was the opening sequence of Episode 7.  I won’t spoil the show for newcomers, but suffice it to say that the scene involves a certain airborne vehicle making a quick journey that ends with one hell of a bang.  Wow, what a thud!  As of this writing, I’ve seen this series twice all the way through and a few times to check out one scene or another on Netflix, and I’m here to tell you: the audio on the streaming service has nothing on this Blu-ray release.  The incredible synth score by Kyle Dixon and Michael Stein encircles the room regularly, as do ambient effects I never noticed before when hearing the show on Netflix.  Bass response is just about off the charts when it’s called for, with sub frequencies coming through that you can actually feel in your chest, not just on the floor.  Dialogue is crisp, clear and intelligible at all times.  The transparency, directionality and expansiveness of the soundstage is truly impressive throughout, and its worth highlighting that the track is presented here at a technically-impressive 24-bit 48kHz.  It shows.  Even though the series takes its time and can frequently feature long bouts of dialogue-only drama, this TrueHD track is an absolute joy the listen to.  It satisfies in all the important ways, both large and small, and it’s a massive and absolutely noticeable step up from the streaming version.  Also excellent!

Stranger Things: Season 1 is sadly bereft of any extras whatsoever aside from the admittedly very cool VHS-style packaging (it should be noted that, for what it’s worth, the box itself is extremely sturdy and feels very much like a nice-quality package). Inside the magnetically-sealed outer case is a sleeve with an exclusive poster featuring the Demogorgon and, of course, the DVD discs as well, nestled underneath the more prominent Blu-ray discs on top.

If you’re a fan of the films of Spielberg, Carpenter, or even Reiner combined with the unmistakably evocative moods of the 1980’s, and you’re one of the six or seven people who haven’t checked out this amazing series yet, you really owe it to yourself to give it a chance.  At only eight episodes, it’s not a terribly substantial time investment for a television series, and it accomplishes what it sets out to do with style and vision seldom seen in this era of quick cuts and MTV editing.  Some may find the show too derivative to be its own beast, but Stranger Things managed to satiate my particular appetite for the films of my youth in all the right ways.  Even without a true 4K UHD release or any extras to speak of, it’s hard to balk at Netflix’s more-than-reasonable asking price.  I’m weighting my overall score quite heavily to favor the artistic and technical quality of the show itself.  This is simply the best way to watch this fantastic show, and if you’re on the fence, it’s positively worth picking up just to see and hear it for yourself.  Buy it for the content, and you won’t be disappointed.  Recommended.